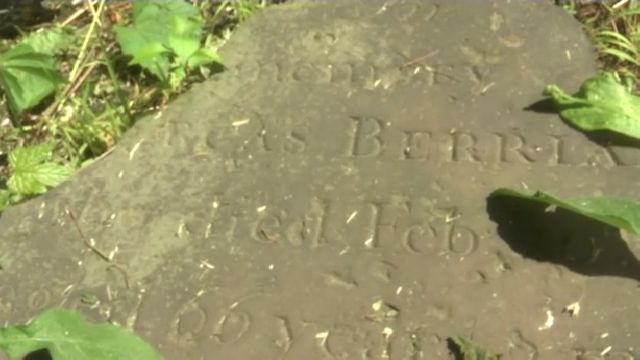 Scattered on the ground and covered in weeds at Van Cortlandt Park in the Bronx are headstones with long forgotten names. When Kingsbridge Historical Society Vice President Nicholas Dembowski discovered the broken slabs he began a journey through the past.

"I began to wonder, who these people are and why are their headstones just lying up against a fence," Dembowski said.

“When he sold the adjacent land to the Van Cortlandts, he actually exempted that cemetery from that sale to ensure that cemetery would continue," Dembowski said.

Dembowski says the burial ground changed in the 1980's when the Parks Department removed the headstones, possibly to protect them from vandals.

He's been getting letters from descendants, who like him, want the agency to restore the tombstones and return them to the burial ground.

There’s also a hidden history here at the park. Historians believe a nearby wooded area is where the bodies of slaves who worked this land, are buried.

The Kingsbridge Historical Society wants the city to create a memorial to the slaves who rest there, and add signage to tell their story including the segregation they faced in life and death.

"You have this cemetery for Colonial settlers and adjacent, on lower-ground closer to the lake is where Africans were allowed to bury their dead," Dembowski said.

The Parks Department tells NY1 the agency is open to working with local groups to maintain former burial sites and looks forward to hearing ideas about this one.

"It’s good to know the history, where we are, where we came from. That way we can know where we’re going," said Jose Gomez, a runner.

Gomez says he didn't know he's been running on sacred ground but everyone should stop to appreciate the past.