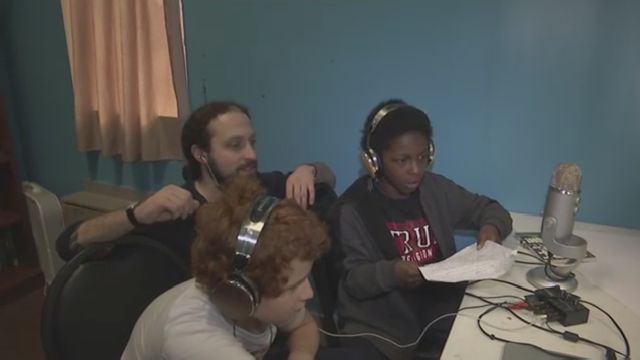 Program in Brooklyn tries to help homeless kids through music

11-year-old Stephen Brancman is the producer and 9-year-old Tayquan Holston-Jeffrey is the artist in their recording studio in the family center of an East New York homeless shelter.

Once a week, children at the shelter get a chance to escape through music. They have the use of high-tech recording equipment to create beats and lay down tracks. It's part of a music therapy program run by the Brooklyn Conservatory of Music and the non-profit group CAMBA.

"Music therapists use music in a way to work on clinical goals rather than just music goals. So we do create product, the kids are actively playing music, the therapists are there with them," said Toby Williams, the music therapy director of the Brooklyn Conservatory of Music. "But we're also identifying where are the needs. Are there social emotional needs? Are there developmental needs that we can work on through activating the kids through playing music?"

Stephen said he's able to express his emotions through his music.

"I put sad into this a lot of time, and happy, and angry," Brancman said.

CAMBA brought music therapy to the shelter about three years ago as part of a citywide pilot project with the city Departments of Homeless Services and Youth and Community Development. About 50 children have taken part. Organizers say they've seen positive change.

"Whether it's that they're calmer, or their anxiety seems to be a little bit less, they've built their coping skills. Music is just the venue for them to do that," said Christie Hodgkins of CAMBA.

Each child gets to keep a set of headphones. The Brooklyn-based company Symphonized donated them, as well as other high-end audio equipment.

"The base is really deep and it sounds like high-quality recordings that they're used to hearing," said Maxim Sorokopud, the PR manager of the company.

"I feel excited when I do it because I'm actually making cool beats," said one program participant.

''I feel my music is hyped," another said. "It makes everyone excited when I put it on."

An empowering, expressive experience for children in a program that may soon expand to other shelters.