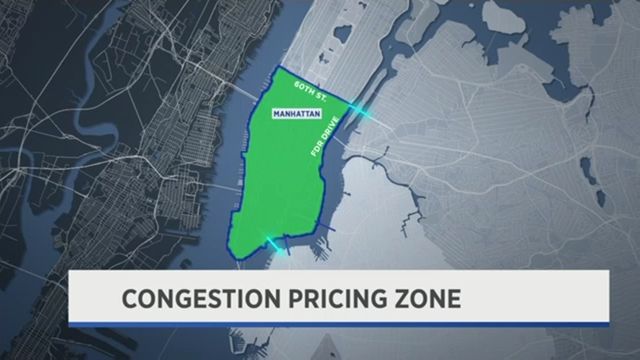 Private cars would be required to pay up to $11.52 if they enter Manhattan south of 60th Street.

Trucks would pay $25 and taxis and other for-hire vehicles could see a surcharge between $2 and $5.

According to the governor's Office, the plan would be rolled out in phases.

The first would include the construction of license plate scanners along the proposed pay zone.

There's also a possibility the congestion pricing could extend up through 96th Street.

New Yorkers who use mass transit told NY1 they're fans of the proposal, while drivers are largely against it.

"The city would be that much cleaner, less traffic, easier to get around. It would be awesome, everybody should ride their bikes anyway," said one New Yorker.

The Manhattan and Williamsburg bridges would take drivers directly into the congestion pricing zone. But the Queensboro and Brooklyn bridges give drivers the option to hop onto the FDR Drive, where they could bypass the fee.

Most of the plan would require the approval of the state legislature.

"I have received the report from Fix NYC and will review it carefully. I thank the panel for their hard work and effort. I will discuss the alternatives with the legislature over the next several months.

"There is no doubt that we must finally address the undeniable, growing problem of traffic congestion in Manhattan's central business district and present a real, feasible plan that will pass the legislature to raise money for MTA improvements, without raising rider fares.

"A uniform pricing model for FHVs that discourages continuing presence in the central business district and incentivizes trucks to deliver on off peak hours is a necessary component.

"Tolls must be more fair. Trips to and from New Jersey can be less expensive than trips from New York City's outer boroughs. Tolls vary widely, and they must be rationalized so costs are fair to all.

"The report accurately points out that the objective is not to raise tolls entering the borough of Manhattan, but more specifically those trips adding to the congestion in a defined central business district.

"But, as a born and raised Queens boy, I have outer borough blood in my veins, and it is my priority that we keep costs down for hard working New Yorkers, and encourage use of mass transit. We must also find a way to reduce the costs for outer borough bridges in any plan ultimately passed."