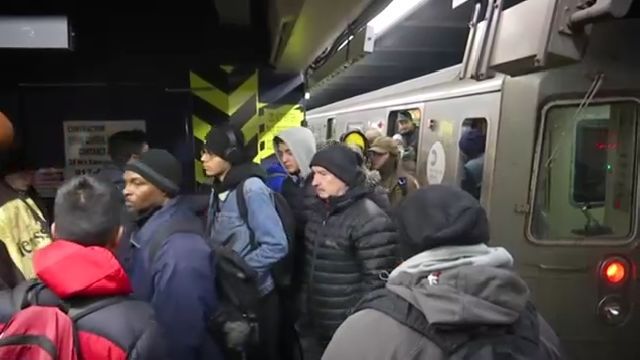 The MTA is still more than a year away from the start of tunnel repairs that will halt L train service to and from Manhattan, disrupting the routines of more than 200,000 people every day. But preparations for the shutdown already are inconveniencing riders on another line. Transit reporter Jose Martinez takes a look.

When the L train stops running next year between Brooklyn and Manhattan, many of that line's refugees in Brooklyn will likely migrate to the G train.

The prep work for their arrival at the Court Square station - where riders on the G train can transfer to the E, M and 7 lines - has turned the rush hour into a smush hour.

"Oh it's a mess, a mess. I've been down there, it's just like everybody's just in one huge circle. And I'm in this box like this. I gotta be stood up like this," said one subway rider.

That's because the MTA is adding three stairways to the G train platform in anticipation of the influx of riders from the L line.

The construction is making for cramped conditions on the platform and in the passageway linking to other parts of the sprawling subway complex.

"I rush to go to work. But it's time-consuming, for that reason, because of the tight squeeze," said one subway rider.

"Sometimes I bump into the crowds and I don't feel comfortable because then I have to transfer and it's going to make my commute longer," noted another rider.

As part of the work, two existing staircases are being widened to make them comply with the Americans with Disabilities Act.

It's all creating a squeeze during the peak hours - even with the MTA's addition of platform conductors trying to move everyone along.

"It's like really crowded, it's hard to like get through. Sometimes you feel uncomfortable," said one subway rider.

"It's crazy, a lot of pushing and shoving. G train is crazy," said another rider.

It's all a preview of things to come in April of next year when repairs begin on the L train tunnel beneath the East River, and service to and from Manhattan is halted.

The G's stubby four-car trains will be lengthened to accommodate more riders, but nothing can be done to expand the platform at  Court Square.

The work going on behind the blue plywood walls is expected to be finalized between July and September.