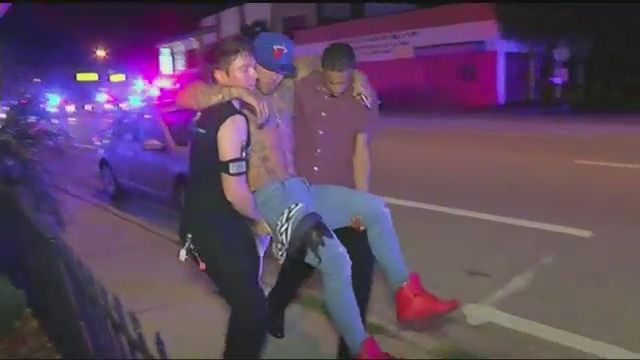 In the wake of the mass shooting at the Pulse nightclub in Orlando, politicians — including both presidential front-runners and high-ranking New York State officials — took to the internet and social media and reacted. They expressed condolences for the victims and their families, condemned the mass violence, and offered their thoughts on the attack.

I join Americans in praying for the victims of the attack in Orlando, their families and the first responders who did everything they could to save lives.

This was an act of terror. Law enforcement and intelligence agencies are hard at work, and we will learn more in the hours and days ahead. For now, we can say for certain that we need to redouble our efforts to defend our country from threats at home and abroad. That means defeating international terror groups, working with allies and partners to go after them wherever they are, countering their attempts to recruit people here and everywhere, and hardening our defenses at home. It also means refusing to be intimidated and staying true to our values.

This was also an act of hate. The gunman attacked an LGBT nightclub during Pride Month. To the LGBT community: please know that you have millions of allies across our country. I am one of them. We will keep fighting for your right to live freely, openly and without fear. Hate has absolutely no place in America.

Finally, we need to keep guns like the ones used last night out of the hands of terrorists or other violent criminals. This is the deadliest mass shooting in the history of the United States and it reminds us once more that weapons of war have no place on our streets.

This is a time to stand together and resolve to do everything we can to defend our communities and country.

Last night, our nation was attacked by a radical Islamic terrorist. It was the worst terrorist attack on our soil since 9/11, and the second of its kind in 6 months. My deepest sympathy and support goes out to the victims, the wounded, and their families.

If we do not get tough and smart real fast, we are not going to have a country anymore. Because our leaders are weak, I said this was going to happen – and it is only going to get worse. I am trying to save lives and prevent the next terrorist attack. We can't afford to be politically correct anymore.

The terrorist, Omar Mir Saddique Mateen, is the son of an immigrant from Afghanistan who openly published his support for the Afghanistani Taliban and even tried to run for President of Afghanistan. According to Pew, 99% of people in Afghanistan support oppressive Sharia Law.

We admit more than 100,000 lifetime migrants from the Middle East each year. Since 9/11, hundreds of migrants and their children have been implicated in terrorism in the United States.

Hillary Clinton wants to dramatically increase admissions from the Middle East, bringing in many hundreds of thousands during a first term – and we will have no way to screen them, pay for them, or prevent the second generation from radicalizing.

All Americans are horrified, disgusted and saddened by the horrific atrocity in Orlando.

At this point we do not know whether this was an act of terrorism, a terrible hate crime against gay people or the act of a very sick person, but we extend our heartfelt condolences to the victims’ families and loved ones and our thoughts are with the injured and the entire Orlando LGBTQ community.

"We in New York know this pain; we've been through it before. And we know that when something like this happens, the entire community feels it. Every neighborhood, people of every background — we feel it together," de Blasio said at the Muslim Community Network's 6th Annual Gala on Sunday.


This is not just an attack on people - it's an attack on our core values of tolerance and freedom. And our values will win. #Orlando

I am shocked and saddened by the senseless attack that occurred early this morning in Orlando. On behalf of all New Yorkers, our thoughts and prayers are with the victims, the injured and their loved ones during this unimaginably difficult time. New Yorkers stand in solidarity with the people of Florida and the LGBT community, and I have directed flags at state buildings to be flown at half-staff in the memory of those who were lost in this terrible act of mass murder.

This is just one more horrific reminder of the need for Congress to pass real and sensible gun safety legislation, just as we did in New York.‎ It is far past time for Washington to act.

Early reports indicate this was likely an act of domestic terrorism. While there is no specific intelligence that suggests any link between the attacks that occurred in Orlando with New York, out of an abundance of caution, I have directed additional security measures at key points around the state as a precaution. The safety of New Yorkers and our state's visitors is our number one priority, and we are remaining vigilant and in close contact with local and federal officials and our partner law enforcement agencies.


Horrified and saddened by the appalling attack at Orlando LGBT nightclub. Praying for the victims and their families.

V saddened to learn of the devastating tragedy in Orlando this morning. My deepest condolences go out to the victims' families & loved ones.