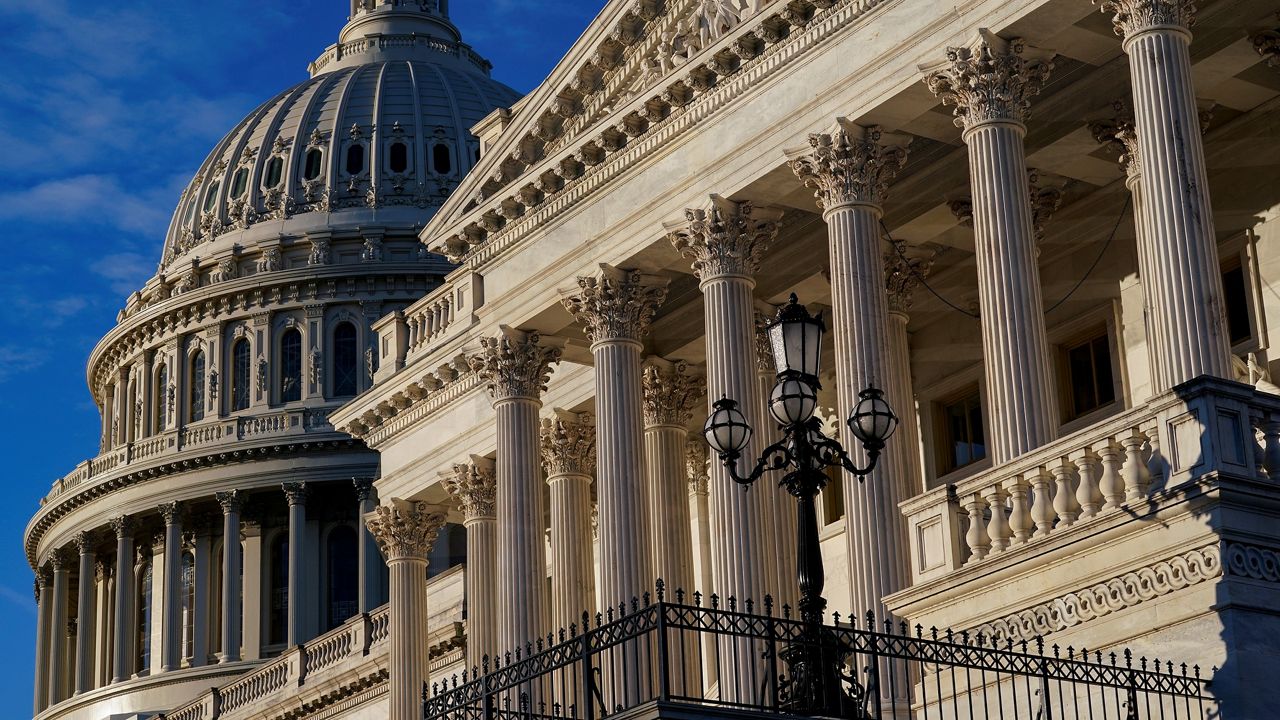 Light from the morning sun illuminates the Senate side of the Capitol in Washington, Dec. 3, 2021. (AP Photo/J. Scott Applewhite)

House lawmakers passed a finalized version of the nearly $770 billion national defense authorization bill, or NDAA, on Tuesday night—voting 363-70 to advance the bill to the Senate, where it is expected to clear the chamber and head to President Biden’s desk for signature.

The final draft of the must-pass legislation raises pay by 2.7% for U.S. service members and Defense Department civilian employees, and provides 12 weeks of parental leave for all members of the military. It also contains provisions that update diversity training requirements, and changes how the military prosecutes sexual harassment and assault – removing commanders from decisions related to crimes of rape, sexual assault, murder and manslaughter.

The defense bill also contains a number of important foreign policy provisions, including the creation of an independent, “multi-year” review commission tasked with evaluating America’s 20-year war in Afghanistan.

It enhances the authorities and capabilities of U.S. Cyber Command to defend networks from foreign malicious cyber actors, and calls for the creation of a “cross-functional team” to address the targeted, mysterious “Havana syndrome” attacks on U.S. diplomats and intelligence officials overseas.

Critically, this year’s defense authorization bill also bolsters the amount of military aid sent to Ukraine from $250 million to $300 million — a $50 million increase that comes as Russia continues to amass tens of thousands of troops along Ukraine’s eastern border, sparking fears of a potential invasion.

Lawmakers on both sides of the aisle praised the bill’s passage on Tuesday, with House Armed Services Committee Chairman Rep. Adam Smith, D-Wash., hailing the NDAA as a “bipartisan, bicameral product that took into account every single opinion that it could.”

His remarks were echoed by the committee’s top Republican, Mike Rogers of Alabama, who added that the legislation includes “strong investments and new capabilities” that enable the U.S. to protect itself from its adversaries.

Still, not everyone is pleased with the final product. Some lawmakers criticized the decision to remove from the bill a controversial provision that would have added women to the military draft.

Jim Inhofe, R-Okla., defended that position, saying: “I’m proud to have successfully removed this provision from the final agreement; because plain and simple, we shouldn’t be forcing our daughters and granddaughters to register for selective service.”

And some lawmakers spoke out about the decision to water down a proposal introduced by Sen. Kristen Gillibrand, D-N.Y., which would have overhauled how military sexual assault cases are handled under the Uniform Code of Miliary Justice.

“It’s not good enough,” Sen. Joni Ernst, R-Iowa, told The Washington Post in an interview earlier this week. “Sure, anything is better than nothing. But it doesn’t solve the problem. It doesn’t go nearly as far as we need it to.”

"House and Senate Armed Services leadership have gutted our bipartisan military justice reforms behind closed doors, doing a disservice to our service members and our democracy," Gillibrand said in a statement Tuesday.

For six decades, the NDAA has cleared both chambers of Congress with strong bipartisan support. But this year, the legislation has faced a number of setbacks, with some lawmakers complaining that much of its negotiations have been conducted behind closed doors.

Republicans, for their part, have sought to blame Senate Majority Leader Chuck Schumer, D-N.Y., for failing to bring up the bill earlier.

“This has gotten dangerous, that we are not able to see the NDAA come to the floor,” said Sen. Deb Fischer, R-Neb., last month. “We are running out of time.”

“It’s becoming harder and harder for the defense bill to be passed every year,” William Greenwalt, a senior fellow at the American Enterprise Institute, told Spectrum News in an interview. “And that’s just [because] of the breakdown in comity between the parties, the breakdown between relationships between the House and Senate. And so yes, the bill's sponsors, the armed services committees, every year find a different way of overcoming those obstacles.”

Ensuring that the defense authorization bill is passed before year’s end is critical—and in recent days, lawmakers from both sides of the aisle have rushed to ensure they do their part in advancing the legislation to Biden’s desk.

The NDAA is considered “must-pass [legislation] because of the pay raise—we want to pay the troops,” Greenwalt told Spectrum News. “In other words, this is the last bill that passes every year under some type of regular order, and provides the oversight of Congress on the national security apparatus.”

“And it's not just defense,” he added. “It's the Department of Energy. It's the Department of State, the intelligence community. There are a lot of provisions in here that address the entire government. And so it's must-pass in the sense that if Congress doesn't … meet the 61 year track record, [it will] definitely be one of those manifestations that you can say is ‘yes, Congress has finally hit its lowest point and is truly dysfunctional.’”