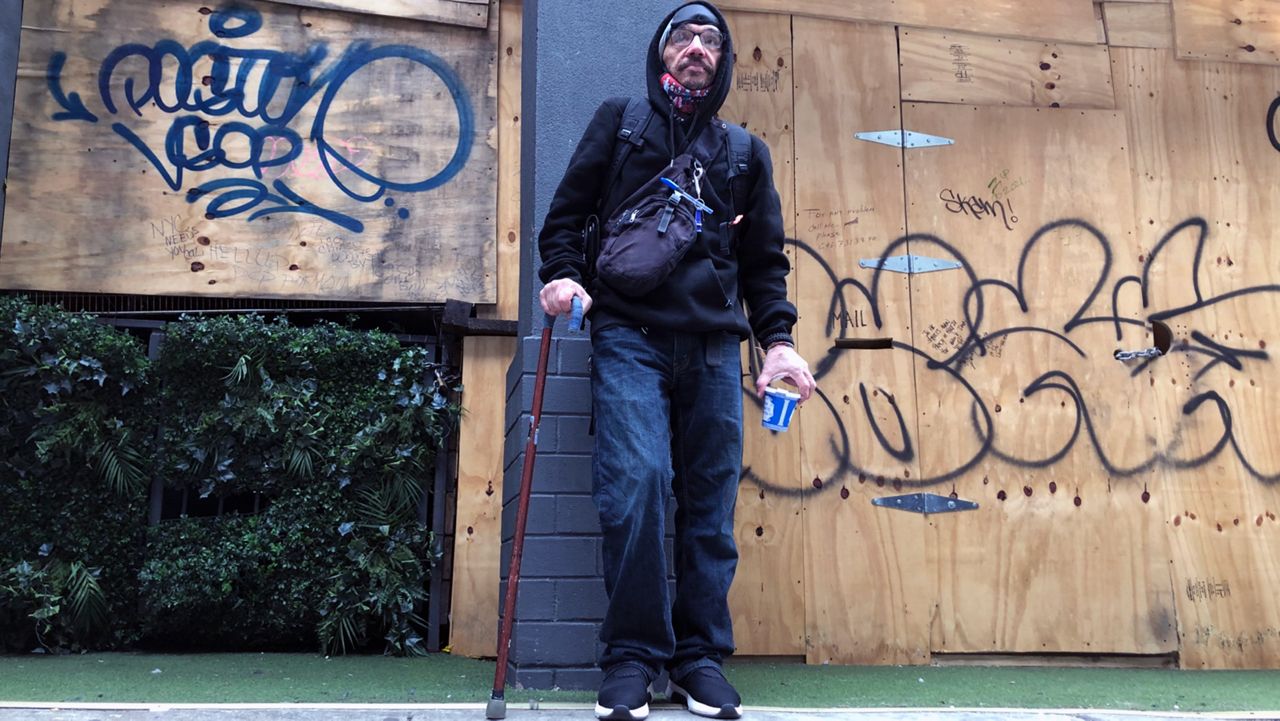 It’s been more than a year since Rebeka and her family lost their apartment in Queens. Since January 2020, they have been living in a hotel — a hotel operating as a homeless shelter for families.

"This whole year has been different," Rebeka explains. "Christmas, New Year's, Thanksgiving, everything is just different."

She has two children and worked for the city until the pandemic hit the five boroughs. NY1 has changed her name to protect her family's privacy.

When we met on a cold day in December, Rebeka was carrying a large stack of papers. On it was the names and phone numbers of management companies and realtors.

"This is a prospective list that I was given by my shelter," she said. "And this is what I have been doing, making calls. I also do social media."

Rebeka was given a list of management companies and buildings from her shelter provider that are supposed to accept her voucher. She called one of them, only to be told they only accepted Section 8.


Her family’s only path out of shelter is a voucher from the city — a path that all too often is a dead end.

She calls a management company based in Long Island City.

On the other end, they ask: "Do you have a Section 8 voucher? Are you looking for affordable housing?"
Rebeka replies: "I currently have CityFHEPS."
"We don’t accept that here," replies the management company.

It’s an exchange that is repeated again and again for Rebeka.

Rebeka calls a realtor about an apartment in Brooklyn. He says they have income and credit requirements.

There are thousands of people in the city’s shelter system desperately searching for housing with the city’s rental assistance voucher known as CityFHEPS. It’s a voucher program started in October of 2018 aimed at getting people in shelter back on their feet.

A NY1 investigation found these vouchers are routinely rejected by landlords — some refusing to rent to people coming from the shelter system — discrimination that is illegal but nonetheless appears to plague the system.

The city has issued thousands of eligibility letters to homeless people to show landlords that they can use the voucher to get an apartment. But statistics exclusively obtained by NY1 show just a fraction of these families actually get housing every month.

For the first 10 months of 2019, on average every month, about 4,118 families with children in shelter had an eligibility letter to entice landlords into the voucher program. On average in that time period, only about 178 of those families found an apartment every month — a tiny slice of those potentially eligible.

Since it started in October 2018, the city says a significant number of households exit shelter and enter permanent housing every year with CityFHEPS. Through September 2020, 6,490 households have moved into an apartment.

Gonzalez and his partner are living in a hotel that is operating as a shelter in Manhattan. He has been in the shelter system for more than 10 years.

"Everywhere I turn, everywhere I go, either you get put on a waiting list and you are waiting there forever, or you are just told they don’t accept vouchers or we don’t take programs," he told us earlier this month..

Gonzalez has basically given up on finding housing with the voucher — an endless slog of disappointment.

He made calls with us to realtors and management companies.

When he called for an apartment in Astoria, he got this response:

We went with him to look at an apartment undercover, one that was listed online within his voucher limit. When we got there, the realtor said the price was actually way out of Gonzalez’s budget.

Back in front of his hotel, Gonzalez says that experience isn’t unusual.

A call by Gonzalez to a management company in the Bronx, SEBCO. He is told they are only accepting Section 8.

"I feel that some realtors and some landlords post one thing until the people get there, and the people that can afford to spend a little bit of money. that have income that’s budgetable and getable or whatnot, you are put in a situation where you have no choice," Gonzalez said. "But the ones who are struggling and in shelters are just left at the wayside."

Currently, a voucher for a couple will cover an apartment for less than $1,323 a month. For a family of four, the limit is $1,580 a month. When you plug that number into any apartment search, you see the inventory for rentals shrinks dramatically. Many of those listings that meet the rent limit still demand income requirements or credit checks, which typically eliminate families in shelters.

And even when voucher holders find a place, realtors or landlords are not always welcoming. Take this recorded call obtained by NY1 from a shelter resident:

"They don’t do programs, sorry," a realtor says.
"Why is that?" a shelter resident asks.
"That’s their choice," she responds. "Usually, broker apartments are not going to be like that."

Leaders in the real estate industry confirm that sentiment.

"Nobody really wants to talk about it, but there are particular problems that are attached with those families that do come out of shelter," said Joseph Strasburg, president of the Rent Stabilization Association, which represents 25,000 property owners in the city.

Those property owners, Strasburg says, don’t think the voucher is a reliable funding stream — the government has abruptly ended similar programs in the past. But he claims it’s not just that.

"How did they come into shelter?" Strasburg asks. "They were either thrown out by their family, or there were drug problems, or there were mental issues. Many of our owners said, 'We are not in the social services business. We are here to provide affordable housing. If we are going to take these people, we need to have certain assurances that the social services are provided by the city of New York.' And to a large extent, that has not occurred.”

Others suggest the problem is complex.

"I have heard a lot from landlords that they don’t get paid on time," said Councilman Stephen Levin of Brooklyn. "But there is significant source of income discrimination that’s out there."

Levin argues he is trying to address the issue, including legislation that would increase the voucher rental limit.

"If we were to just raise the voucher limits to the same as Section 8 or fair-market rent, which is a few hundred dollars more, it opens up so many more apartments in New York City," Levin said. "They know this. We have had this conversation for years."

Nonetheless, the city touts its numbers. Since 2014, it has helped 69,863 people, through an array of different rental assistance programs, leave shelter for an apartment.

A spokesperson for the Department of Homeless Services sent NY1 a lengthy statement in response to our investigation. It reads, in part, "This administration has made specific, strategic policy decisions to create a holistic and comprehensive approach to keeping New Yorkers stably housed, including leveraging state and federally funded rehousing programs to ensure that these resources reach as many of our clients as possible and restoring city rental assistance initiatives, like CityFHEPS, which we built from the ground up following the end of the Advantage rental assistance program – a policy shift, which resulted in homelessness growing by nearly 40 percent in New York City between 2011 and 2014."

It continued: "We remain committed to doing everything we can to prevent homelessness where possible and to connect the New Yorkers who come to us with the permanent housing that will help them find stability for the long-term, which is even more important in these challenging times."