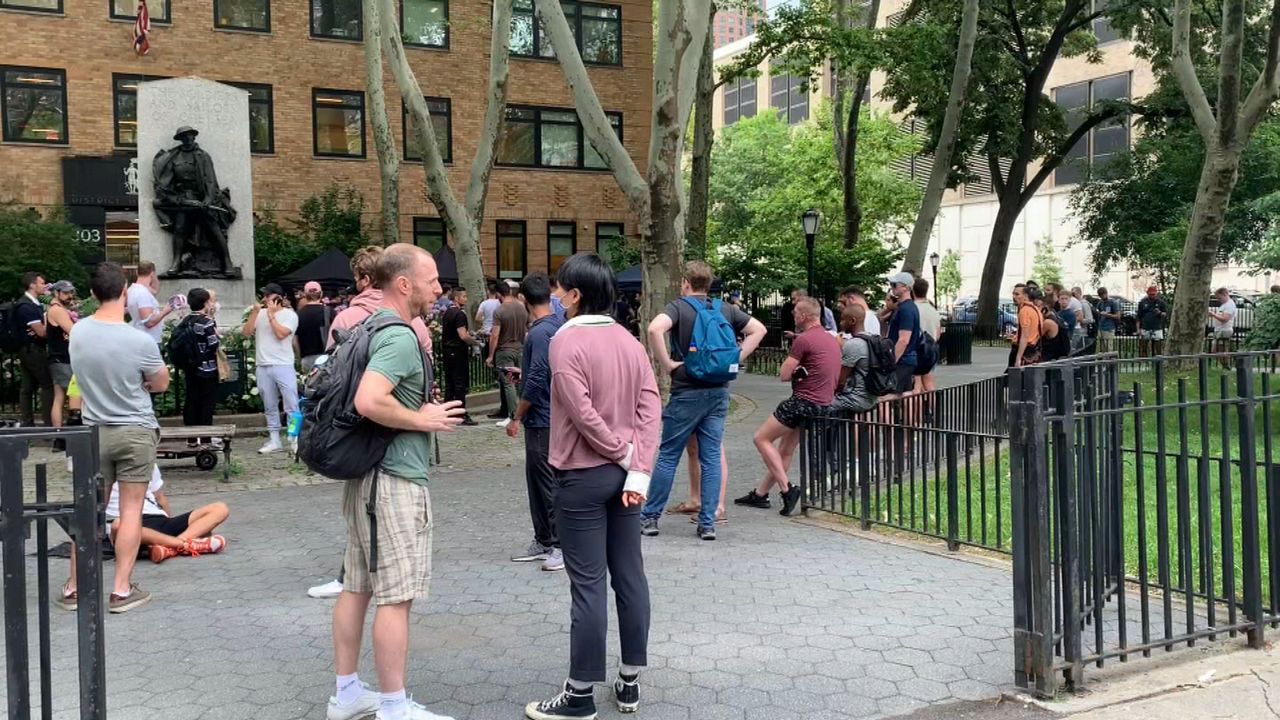 Long lines of New Yorkers waiting to get vaccinated against the monkeypox virus outside of the Chelsea clinic on June 23, 2022. (NY1/Michael Scotto)

NEW YORK—The Department of Health announced on Monday that the city will receive a new batch of approximately a total of 14,500 monkeypox vaccine doses from the federal government later this week, and will open approximately 2,500 appointments on Tuesday for vaccines that the city began distributing last week.

More monkeypox vaccine will be available tomorrow at 1 p.m. Including the appointments opening tomorrow, nearly 7,000 doses of monkeypox vaccines will have become available to New Yorkers since June 23. To get updates, text MONKEYPOX to 692692: https://t.co/5dr7hBpSfw pic.twitter.com/Ly3HdPlmav

The arrival of the JYNNEOS vaccine comes as the city’s Department of Health faces criticism for its rollout of vaccination efforts. Last week, technical difficulties prevented people from making online appointments. And last month, the rollout at a Chelsea clinic was met with long lines and lack of supply.

“We know that vaccine supply continues to be scarce, and appointments may be difficult to get. But we’re working with community-based organizations to ensure an equitable approach and we’re working with federal partners to secure even more vaccine soon,” Health Commissioner Dr. Ashwin Vasan said.

The vaccine requires two doses, with the second dose being administered 3-4 weeks after the first dose, according to the Centers for Disease Control and Prevention.

The department said it will determine the distribution of the new vaccine shipment in the upcoming days.

“As we scale up vaccination, we encourage New Yorkers to exercise some caution. Stay home if you feel sick, and especially if you develop a rash or sores that may be monkeypox, and follow some basic preventive measures,” Dr. Vasan said.

In the five boroughs, 223 people have tested positive for orthopoxvirus as of Monday, according to the Health Department, which has called those cases “likely monkeypox.” New York state has the largest number of cases nationwide, according to CDC data.

The CDC says monkeypox is “rarely fatal,” but it can bring on serious symptoms, including fevers, headaches, muscle aches and backaches, swollen lymph nodes, chills and exhaustion. It can also cause “a rash that can look like pimples or blisters that appear on the face, inside the mouth and on other parts of the body, like the hands, feet, chest, genitals or anus,” according to the CDC.

According to the Health Department, monkeypox cases are primarily spreading among gay, bisexual and other men who have sex with men, but the department says anyone can spread the virus through direct contact with a rash or sores.

The New York State and New York City health departments will host on Monday night a free Monkeypox Town Hall. The virtual meeting will be attended by the state and city health commissioners.