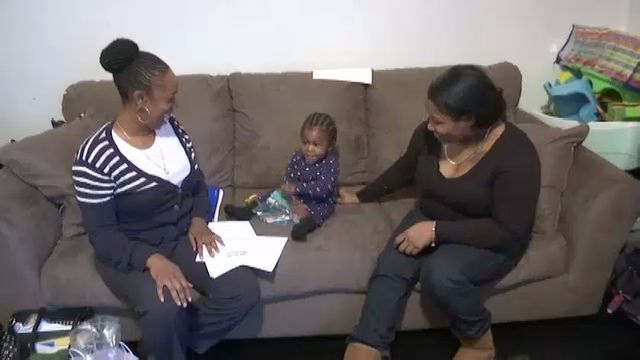 Studies show that poor people do not enjoy the same access to health care as those who are better off, but at least one city program is trying to bridge that gap. NY1's Erin Billups filed the following report.

Tiffany Reid meets with Mikecia Bailey every other week since the Harlem resident was two months pregnant with her son Madden.

Reid works for the city's Nurse Family Partnership, a home visiting program to help low income mothers. But to Bailey Reid is more than just her nurse.

Bailey is one of 21 clients seen by Reid who's based at Harlem Hospital.

The nurse guides them as they wrestle with the demands of parenting.

"My goal is when I'm not there, they have an idea of what to do and how to handle situations, so to give them that appropriate teaching," says Reid.

"It's like everything. You know, we gave him his first bath together, the breast feeding. I guess I was latching on wrong so she came over, she helped me latch on. Since then it's been smooth sailing," says Bailey.

"With that relationship she's able to really mentor that mom, to reach those goals, to be a more effective parent," adds Marcia Pierre, nursing assistant director at Harlem Hospital.

The Health Department offers the program in each borough serving more than 12,000 families since 2003. Over that time the city's infant mortality rate fell to its lowest level in history.

While it's difficult to make a direct correlation, many point to the program here in New York and across the country as a leader in improving the health of new mothers and their babies.

"These are the children that's going to be taking care of me and making sure Harlem remains thriving and doing well, so just to know that I have a part of that it's been awesome," says Reid.

Nurses work with moms until the children are two years old. Right now, the program is only able to serve six percent of the city's eligible mothers.

More state and federal funding is on the way, but city officials say much more will be needed.