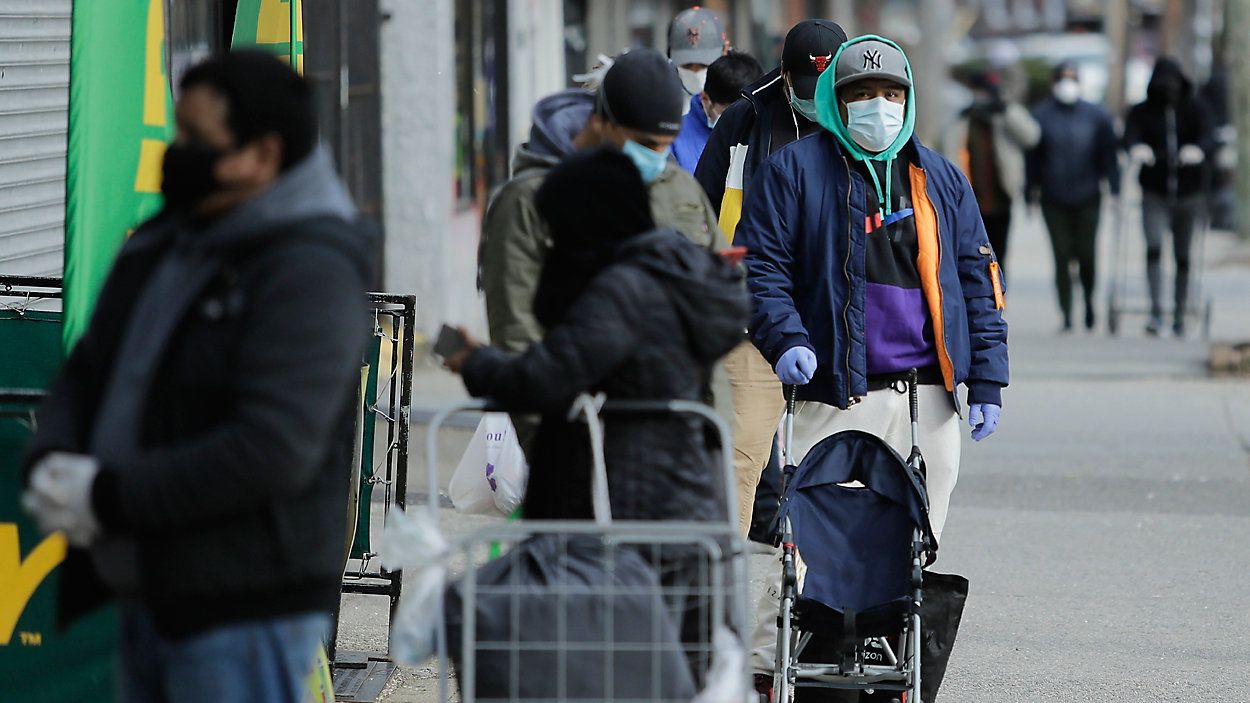 Patrons wait in line for a supermarket in the Corona section of Queens. Data released by city health officials show that residents in parts of Queens have tested positive for the coronavirus at higher rates than in wealthy parts of Manhattan and Brooklyn. Frank Franklin II/AP.

Racial Disparities No Surprise, So Now What?

As snapshots of the disproportionate burden of COVID-19 on communities of color continue to emerge, the reaction from the country’s leaders paints a picture of how entrenched racial health disparities are in the United States.

“We've known literally forever that diseases like diabetes, hypertension, obesity and asthma are disproportionally affecting the minority population, especially African-Americans,” said Dr. Anthony Fauci, NIAID director and member of the White House Coronavirus Task Force. “The things that get people to ICU's, that require intubation and often lead to death, they are just those comorbidities that are unfortunately, disproportionally prevalent in the African-American population.”

Maya Clark-Cutaia is a PhD clinical researcher at NYU College of Nursing and a practicing registered nurse, treating patients from Black and Hispanic communities, many of whom live in low-income neighborhoods. Pointing to her own research, Clark-Cutaia explains that the higher disease burden is partly a consequence of what is not available to those who simply have less.

“In some of the work that we have done, at least 50 percent of the patients report an inability to maintain dietary restrictions due to a lack of time and convenience, especially when managing multiple chronic conditions,” said Clark-Cutaia. “These patients also report financial constraints, citing that their income is inadequate to meet their basic daily needs.”

Dr. Mary Bassett, Director of the Harvard FXB Center for Health and Human Rights, says Black and Hispanic communities also have a greater risk of COVID-19 exposure. "People who live in crowded conditions, who have to travel on crowded public transportation to work, who work in places where the six-foot rule doesn't make sense, who have a role as essential workers, which doesn't just include doctors and nurses. It includes the people who are checking out our groceries at the supermarket, it includes people who are delivering the packages to our houses,” said Bassett. “Many low wage workers, insecure workers who lack health insurance coverage and are disproportionately people of color, are still out there working.”

Bassett, who is the former health commissioner of New York City, says the impact on Black and Brown Americans has been years in the making. “The framework in which we've been working was not adequate to prepare or protect ourselves,” said Bassett “It made us at risk. The sort of glaring rise in income inequality that has occurred over the last 30, 40 years is hurting us.”

The lack of health insurance too, is a major driver of the rising rates of uncontrolled chronic illnesses. “We still have 29 million Americans who don't have health insurance and we have like 10, 11 million people who are undocumented, who aren't eligible under the Affordable Care Act,” said Bassett. “So, there are a lot of people whose access to health care is compromised. They don't get tested and they don't come until they're very, very sick, to hospital. These are all things that created vulnerabilities that we could identify, even before the numbers of COVID infections began to soar.”

Another determinant of health outcomes is the air we breathe. “We know that for African Americans, they are much more likely to be exposed to harmful air pollutants,” said Connor Maxwell, Senior Policy Analyst at the Center for American Progress. A recent study out of the Harvard T.H. Chan School of Public Health finds that long term exposure to pollution is linked to a 15 percent increased risk of death due to COVID-19, which attacks the respiratory system.

During Tuesday evening’s White House coronavirus briefing, Dr. Fauci called the situation sad, “there is nothing we can do about that right now except to try to give them the best possible care to avoid those complications," said Dr. Fauci.

Health equity experts like Dr. Bassett say there is plenty more that can be done, including tracking who exactly is getting sick. “The CDC releases data by age and sex, but they have not been releasing data by race. These are known fissures in our society along which many inequities track, in terms of our health, that reflect a long history of segregation, discrimination. We have to have the data in order to identify what appear to be very large disparities.”

Bassett says the data will help direct resources where they are needed most. She says she also expects the data will reveal other disparities about who exactly is dying within these communities.

“Another thing to keep in mind is that the age distribution in the black versus white population is really different,” said Bassett. She says currently about 20 percent of White Americans are 65 and older, while only 10 percent of Black Americans are older than 65. “That reflects the much higher rates of premature death. So when we are talking about people dying, we have been just talking about the numbers and not age adjusting. And it matters how old you are when you die. So I suspect that we're seeing deaths among blacks at a younger age.”

Conducting clinical trials for potential COVID-19 drugs in hospitals serving marginalized communities, is another way Bassett says those most vulnerable could be served in the midst of a pandemic. “There's a long history of that kind of conversation that took place during the AIDS epidemic about the right of access to clinical trials. That was sometimes the fastest way for people to get access to what turned out to be effective treatments.”

Clark-Cutaia too, is calling for additional planning and investment in communities of color, including creating culturally appropriate public health messaging on the increased risks for COVID-19.“We need to meet these communities where they are. There need to be testing sites in their areas,” she said. “We should discuss advanced care plans, in addition to methods to keep yourself healthy. We then need to determine what resources patients need to achieve these goals and again make them available.”

These experts say vulnerable populations also need to feel protected. One place to start, says Maxwell, is greater access to protective gear. “We need to be ensuring that there is an equitable distribution of resources, that medical supplies like PPE and ventilators are going to the communities that are facing the most demand for treatment right now especially communities that have higher rates of asthma and other respiratory issues.”

Pointing to efforts taken by hospitals in Boston, Bassett says employers could put their essential workers up in hotels near their places of work to cut down on commutes and exposures. “If you don't want to go home to your family worrying that you may be bringing COVID home with you, you can stay in a hotel room. Those sorts of things show not only that we respect the sacrifice and the risk that people who work in our hospitals system are taking, but that we're going to step up to make sure that they don't have to spread that risk to their family.”