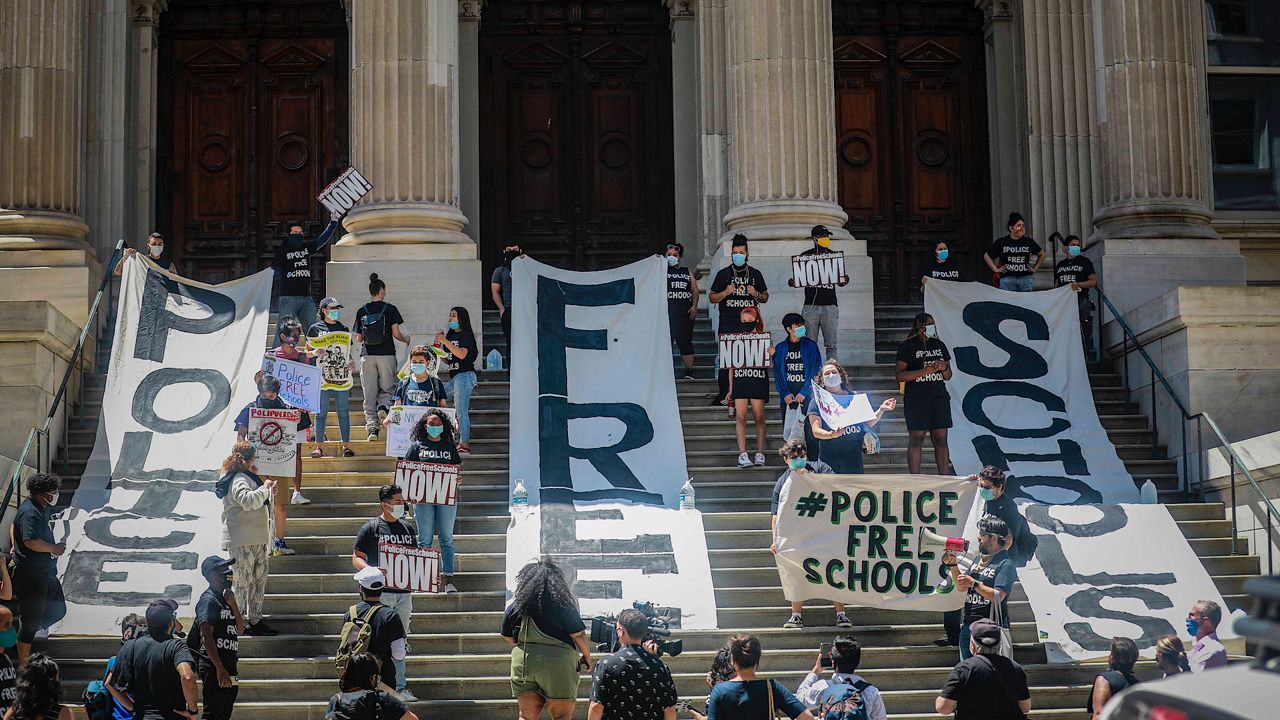 A coalition of student activists say they have a message for the mayor: don’t add more NYPD school safety agents to the city’s schools.

“Basically we wrote this letter to the mayor, like, demanding for him to listen to us because his prayers and his condolences are not enough, and justice needs to be done. And that starts with police free schools,” said Jocelyn Palafox, a student at Curtis High School on Staten Island.

That letter is signed by sixteen youth organizations, which say they represent a total of more than 1,500 students, including Jocelyn. She says the presence of the agents -- who don’t carry guns but work for the NYPD and have the power to handcuff and arrest students -- is unnerving at a time when police killings of people of color dominate headlines.

“They don't make us feel safe, and we've been saying that like constantly and he hasn't been listening to us,” Jocelyn said.

The letter asks Mayor Bill de Blasio to nix a plan to spend $20 million on hiring 475 more school safety agents, a plan that was floated at a City Council hearing earlier this year, despite Mayor de Blasio's promise last summer to transfer the agents from the NYPD to the Education Department. School safety only moved to the NYPD in the 1990s, under Mayor Giuliani.

That transition back to the DOE won't be complete until June of 2022. And some student activists don’t believe it goes far enough. They point to statistics showing Black and Hispanic students are disproportionately arrested and handcuffed in schools

The missive to the mayor reads, in part: “Imagine what we feel annoying we're not afforded any of the grace that our peers and wealthier whiter schools are, because just one mistake could get us arrested, or worse, and imagine how we feel, when our elected leaders, offer their thoughts and prayers, all while funding the largest school police department in the country.”

Akeria Adams, a student says in her Far Rockaway school, the agents often escalate conflicts rather than quelling them.

“In high, tense situations, that's when students need mental emotional health the most, and police do not provide that type of support,” she said.

The mayor has argued the agents care deeply about students and families -- likening them in some cases to students’ uncles or aunts. Earlier this year he told NY1 that while the agents would change agencies, they would still be necessary in schools.

"We still need to have enough school safety officers so that's really the crucial issue we have to figure out in the coming months,” he said of the possibility of hiring a new class.

An education department spokesman says no decision has been made on hiring a new class of school safety agents, or SSAs, and that they're undergoing de-escalation and implicit bias training.

“SSAs are civilian members of service under the NYPD, not police officers, and the DOE is bringing our current staff of SSAs back to the DOE as part of our goal to provide students with complete safety, where their physical and emotional needs are met by caring adults,” spokesman Nathaniel Styer said. “We are working with stakeholders to ensure that this vision guides the SSA transition back to the DOE and they are both fully incorporated into school communities and aligned with our trauma-informed practices.”