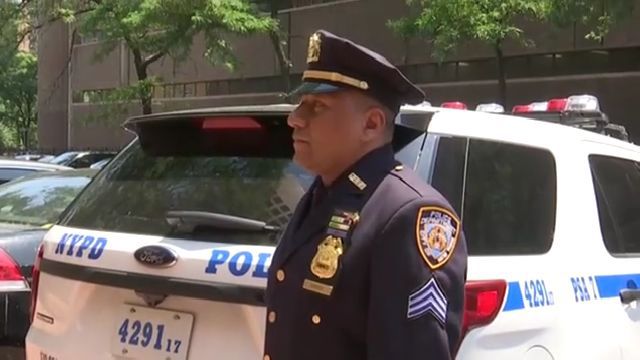 The NYPD's ranks are filled with thousands of immigrants

Sergeant Leonel Ramos has been helping to keep the city safe for 11 years. Many New Yorkers would be surprised to learn that this NYPD officer was once an undocumented immigrant.

"According to my parents, a retired US Army colonel helped us out, help them cross over the border from Tijuana," he said.

It was 1982, and Ramos was only six months old when his parents paid the retired colonel $700 to smuggle them in a pickup truck from Mexico.

"Stuffing them in the back of the car while I was in the arms of his wife," Ramos said. "And we just drove right through at the border. He gave a salute, and we were good. Here I am."

At a time of harsh words by President Donald Trump toward undocumented immigrants, and even some forms of legal immigration, the NYPD offers something of a counterpoint.

The president often paints immigration as a path for criminals to enter the U.S. But 22 percent of the 2,800 police officers hired in the last year and a half are foreign-born.

They come from 77 countries, mostly in the third world. Only a handful are from Italy and Ireland, long a source of foreign-born officers.

Many entered through visa lottery or family-based immigration programs the president wants to limit. Some, like Ramos, entered illegally and then became legal. In his case, his Air Force service helped to fast-track his citizenship.

When asked for his message to immigrants and undocumented immigrants, Ramos said, "Keep your head up. This is New York City. Everybody works hard, especially have a chance. We all work hard. Just keep going fine, keep your head up, stay focused and sí se puede, it can be done."

"Broadly speaking, it does. The rhetoric does bother me," he said. "People need to take a breath and take the opportunity to come out and meet people, meet the officers in the NYPD. We are a diverse group, and just see what that means and see what a difference it makes to making the city safe."

Deputy Inspector Flerida Veras came from the Dominican Republican when she was 16.

"We lived in poverty our whole life," she said. "We had a lot of faith and a lot a hunger to work and to progress, and there was no way of doing it in DR. We pretty much starved. We had to find a better way."

A better way out of what she describes as a Dominican neighborhood plagued by garbage and despair. Her parents entered the U.S. illegally in the 1980s, one through Mexico, the other through Canada. Veras says they later brought her and her siblings here legally.

Now, she's the commanding officer of the 41st Precinct in the Bronx, the highest ranking Dominican woman in the NYPD.