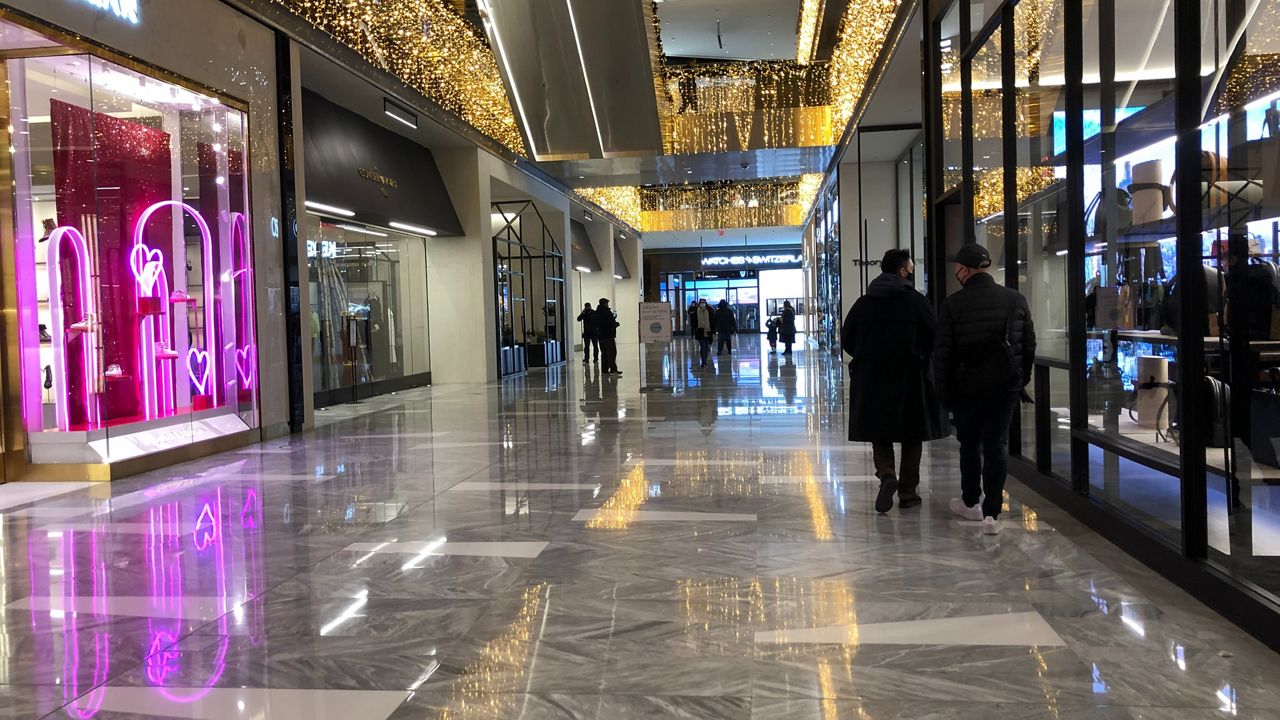 Hudson Yards Is Open For Business - but Who's Coming?

It's been nearly two years since Hudson Yards opened with much fanfare — a massive development of condos, office space and upscale retailers on a huge platform built over a tangle of railroad tracks on Manhattan's far west side. But many shoppers have vanished and stores have closed because of the pandemic, raising questions about the development's future.

"The pandemic's been tough," said Anthony Cirone, the co-owner of Li-Lac Chocolates.

The near-century-old local company had to lay off about 20 workers - 40 percent of its staff - because of the pandemic, but all six city locations are back open, including the one in Hudson Yards.

"A big part of our customers base is tourists and office workers, and neither of them are here," said Cirone.

He said sales are down about 60 percent versus last January.

One floor down, Van Leeuwen Ice Cream is wrestling with a similar drop in sales.

"It would be among our hardest hit," said co-founder Ben Van Leeuwen of his shop in Hudson Yards. They have 23 locations, 17 of them in the city.

"Definitely in the top 5 percentile of hardest hit," he said. Cellphone data compiled by the company SafeGraph shows foot traffic in the zip code plunged nearly 100 percent when the pandemic erupted, but it recovered to about 25 percent of pre-pandemic levels over the summer and has plateaued there ever since. According to the data, the zip code still suffers from the fourth-biggest decline of the 14 largest retail areas in the city.

"It’s not doing particularly well, even given the circumstances. It’s doing a lot worse that other zip codes," said Nick Huntington Klein, an economics professor at Seattle University who also works for SafeGraph.

Hudson Yards opened for business one day shy of a year before the pandemic hit. The ribbon cutting, which took place on March 15, 2019, brought international coverage, the launching of a new, manmade neighborhood of retail, office towers and residential skyscrapers built at a cost of $25 billion, including billions in taxpayer subsidies.

Owner and developer Related Companies maintains it’s collecting 100 percent of the office rents. It's a private company, so its finances are not made public. A spokesperson said all the office space is 93 percent leased, and that includes 50 Hudson Yards, which is still under construction. "They have their work cut out for them," he said, explaining that the market started softening years before the pandemic, which only made matters worse.

Van Leeuwen Ice Creams said Related cut it a big break on the rent that it owes and couldn’t pay with so few sales here, which has allowed it to keep the doors open.

"The team at Related, who owns Hudson Yards, has been as good of a partner as anyone could ever dream of," Ben Van Leeuwen said.

Cirone met with Related this week hoping to carve out another lease deal, this one for 2021, while waiting for that sweet spot of profitability to return.

"We expected that things would be back to normal by now," he said.