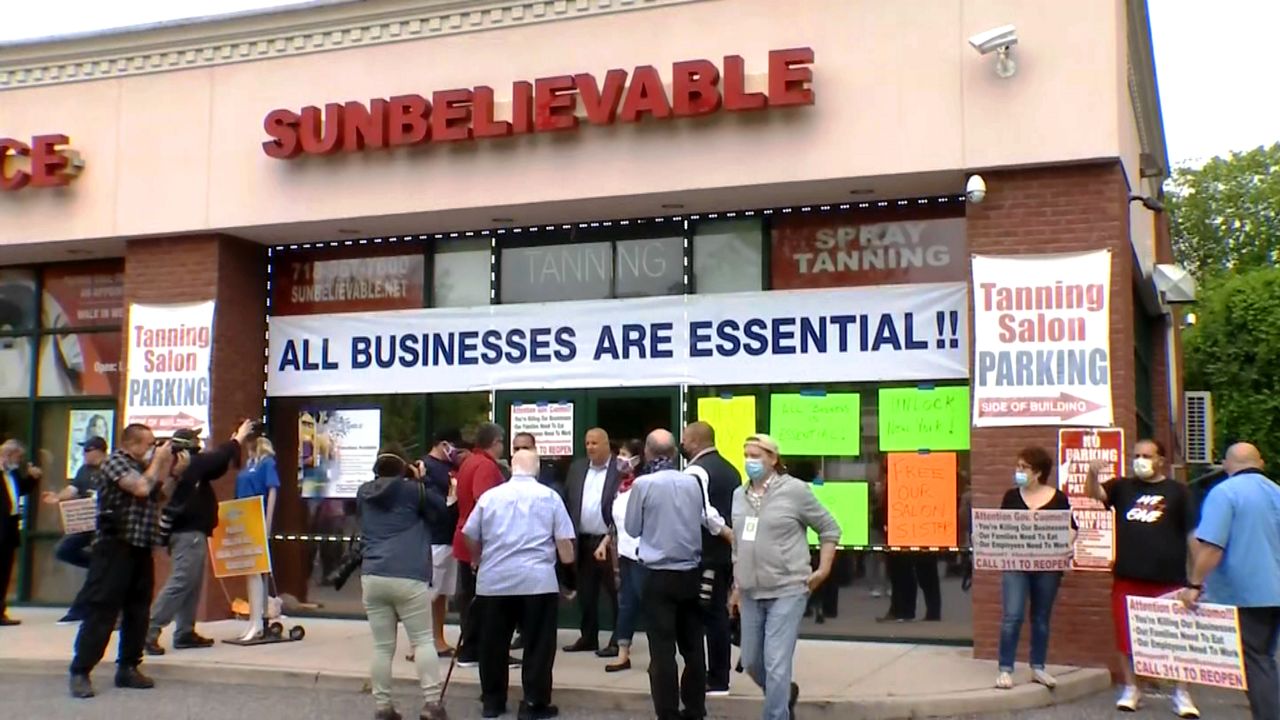 Staten Island Tanning Salon Reopens, But is Quickly Shut Down

STATEN ISLAND, N.Y. - For the first time in weeks, a popular tanning salon on Staten Island reopened for business Thursday, but it didn’t last long.

Robert Catone walked past a cheering crowd that chanted “Bobby! Bobby!! Bobby!!!” to reopen Sunbelievable, a tanning salon in Great Kills that he has owned for eight years.

But less than 20 seconds later, several police officers followed him in, and they made good on the Mayor Bill de Blasio’s threat to shut it down.

“I was willing to go to jail actually,” said Catone. “And then at the last minute they said they're going to have the health department come take my license and shut me down. And they can't do that!” To avoid having the license revoked, Catone accepted a summons, which he quickly ripped up. He also agreed to close up shop, at least temporarily, as he explores his legal options.

It was not clear if any of the supporters who were on hand Thursday were actual customers. However, Catone said he and other small businesses that have opened illegally are entitled to express their outrage.

“Why is a big box store or any of these big retails outlets open? It’s insulting,” said Catone. “I think it’s insulting! It’s them saying we don’t trust you. You trusted us to shut down and shelter in place but now you don’t trust us to go back into business? It doesn’t make sense.”

Thursday’s rally and the short-lived reopening came just three days after Governor Cuomo denied a request from Staten Island lawmakers to reopen the borough ahead of the rest of the city. Borough lawmakers argued that Richmond County had met the seven metrics required to reopen its economy.

Mayor de Blasio has issued a warning to any business that tries to make up their own rules and jump the gun on reopening in the middle of a pandemic. "I'm not into free agents,” said De Blasio. “I'm not into people deciding that they get to make the rules and they can do something everyone else can't do."

Both the mayor and governor's office have said the city is currently on track to begin reopening in early June.

Catone, who claims he is now broke as a result of the forced closure, said that timetable could sink his business.