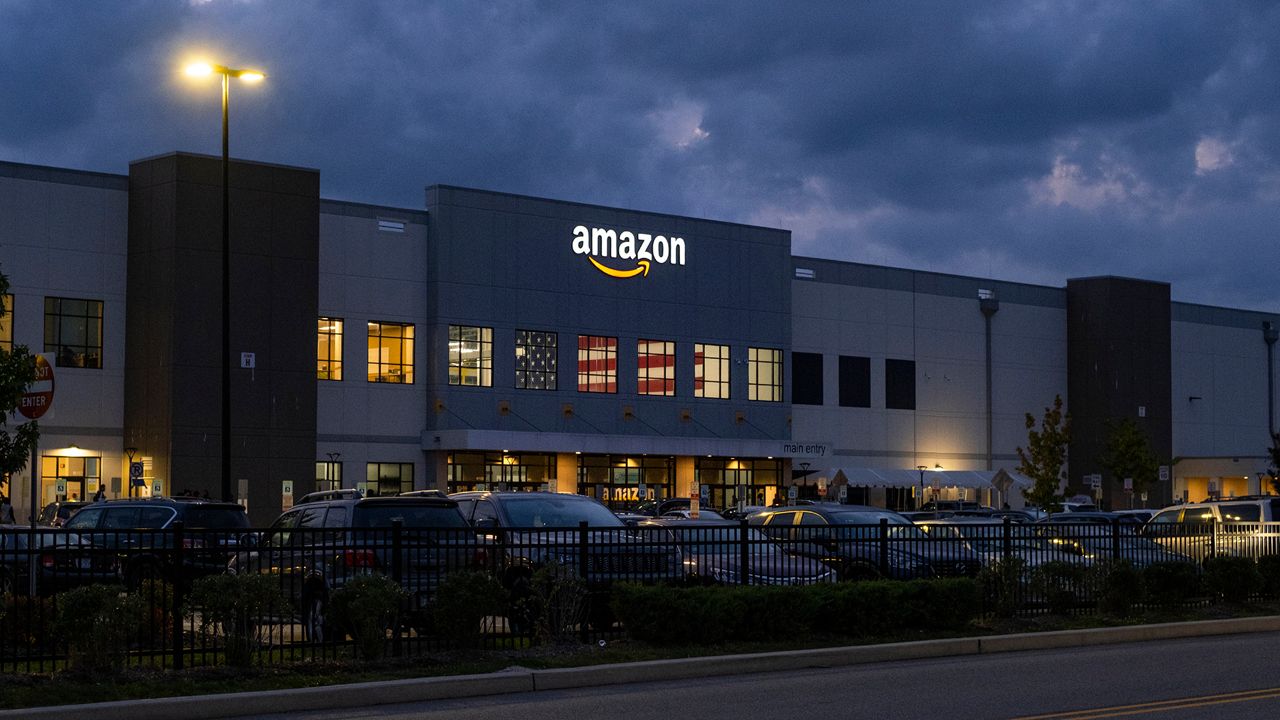 Inside the fight to unionize Amazon on Staten Island

It’s early November, and there is a chill in the air. Small lights are being carefully strung up along a tent outside one of the city’s largest Amazon facilities.

Large blue trucks with the now-iconic Amazon Prime smile whiz by. A banner reading the Amazon Labor Union flaps in the breeze. And a gaggle of employees, current and former, circle a small bonfire pit, the campfire crackling.

They are hoping this is not the only thing that ignites here.

For months, a small group of these workers have camped out outside of a Staten Island warehouse, trying to convince thousands of Amazon employees they should support their cause.

They hand out free food — empanadas one day, pizza on another. At one point, they advertised free marijuana.

“We want the workers to understand that this union is controlled by the workers,” Chris Smalls, the head of the union, tells us. He’s tall and typically clad in some sort of apparel sporting the union logo, ALU.

But this group of underdogs are going up against one of the biggest of big U.S. companies — Amazon.

Last week, this group, known as the Amazon Labor Union, passed a significant threshold: the National Labor Relations Board found it had established enough support from workers to move forward toward a union election at one warehouse on Staten Island with at least 5,000 employees. It’s the second time these workers have tried to get an election, and now it could occur as soon as March.

Going further on Wednesday, the ALU submitted another petition with the labor board to have another election at a separate Amazon warehouse across the street.

Even with all of this movement, it’s unclear whether they have enough support to actually move forward and win.

“I feel like any job where thousands of people work in one space or with a company that is so big they feel like they’re above certain rules should have a union,” said Tristian Martinez, an Amazon employee and organizer with the union. “There should be somebody there with your benefits in mind."

Amazon has not supported their efforts.

At the end of last year, the company was pulling employees into what’s known as captive audience sessions — led by Amazon employee relations leaders to try to convince workers to not join the union.

NY1 obtained audio from one of these sessions where they spoke of the proposed union. In it, you can hear the proctor discreetly dissuade employees from joining.

"ALU can say or promise anything,” he says. “So, that’s why it is important to read closely anything that you are going to sign. So, they may tell you there is free food or other things. In exchange, you may be also giving up some of your voices, and you may be obligated to pay the ALU, the money fees, as well. Just for educational purposes, for your information.”

Another person leading the session encouraged employees to examine unionfacts.org, which some union leaders say is an anti-union website.

During a trip to a New Jersey Amazon facility late last year, we asked an Amazon spokesperson what the company thought of the Staten Island efforts.

“We respect employees' rights to join or not join a union,” said Rena Lunak, an Amazon spokesperson. “It’s really up to them, and we’ve always felt that way. We believe direct interaction is the best option for them, because it allows us to make changes on their behalf quickly and nimbly, and that’s not possible with a union.”

In papers filed with the National Labor Relations Board last week, Amazon argued the union had not established enough support in the form of valid signature cards from employees to move forward.

In a statement to NY1, an Amazon spokesperson said, “We’re skeptical that there are a sufficient number of legitimate signatures and we’re seeking to understand how these signatures were verified. Our employees have always had a choice of whether or not to join a union…”

The Amazon Labor Union is not affiliated with one of the city's established retail unions — like RWDSU, which is leading the charge in the south, where Amazon faces another union election. The leader of that union told NY1 they support the workers’ efforts on Staten Island.

“The labor movement has supported the workers in Staten Island, through organizers, through legal counsel, through financial support, and that’s because we believe it’s important for workers everywhere to organize," said Stuart Appelbaum, president of the Retail, Wholesale and Department Store Union.

The union here is led by a former employee, Smalls, who says he was fired after leading a walkout at the beginning of the pandemic. Amazon says Smalls was terminated for violating their social distancing and COVID-19 quarantine protocols.

Smalls promises the union will give workers more protection and, he claims, higher wages. When on the Staten Island Amazon campus, Smalls and other ALU organizers often tell employees coming to and from the warehouse they would try to get them $30 an hour. Employees tell NY1 their starting salary now is a little over $18 an hour.

Regardless of their victory last week, these organizers are in for a brutal fight. Already, the National Labor Relations Board has filed a complaint against Amazon, alleging representatives had threatened employees on Staten Island, telling them joining the union was “futile.” The complaint also alleges an Amazon representative referred to union organizers as “thugs.” NY1 reached out to Amazon to respond to the complaint but did not hear back.

So far, these organizers seem undeterred. Of course, it’s unclear whether they can deliver.