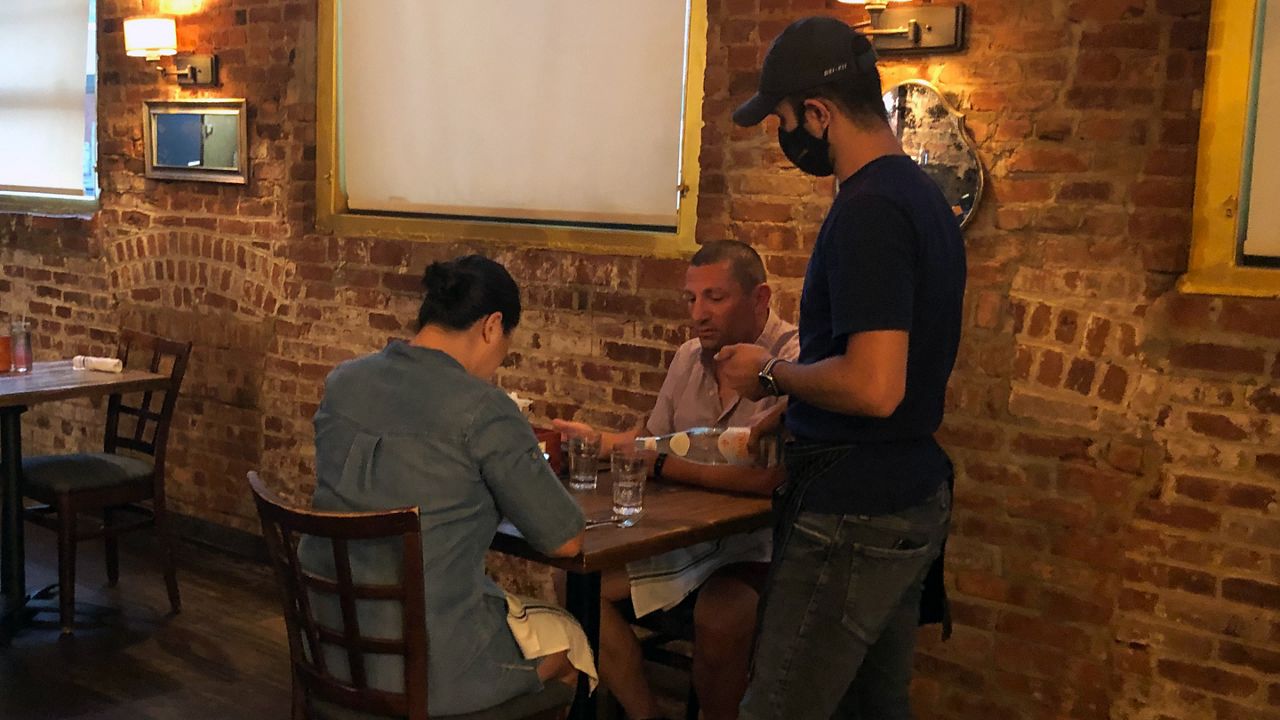 Outdoor seating was packed along Grove Street in Manhattan Friday, as New Yorkers took advantage of the nice weather and went out to eat.

Many patrons along Grove Street in Jersey City decided to eat outside as well Friday. But for the first time in nearly six months, they had the option to eat inside if they wished to do so.

Patrons of Luna on Grove Street in Jersey City said that they were eating outdoors because it was nice, and most said that they would eat indoors if it was warmer or raining.

One patron who did eat indoors seemed happy about a small sense of normalcy.

"It's a little bit eerie because no one else is around, but I’m glad that everyone is getting back to normal," he said.

For those who wish to opt for indoor dining in New Jersey, there are a few differences that will be noticeable.

"You will not see servers wearing gloves because that is less sanitary than washing your hands. So in the original protocol, it had gloves. Then, it was taken out because it had, scientists and epidemiologists realized that hand-washing is so much better for front of the house. You're going to see things like probably fans and increased air ventilation, the windows open,” said Marilou Halverson, president of the New Jersey Restaurant and Hospitality Association.

At Luna, the owner, Julian Muscio, has also added a digital menu to the list. He said that the digital menus are more sanitary and have also helped him manage the restaurant and his menu.

"All of those amazing photos that you see on Instagram and stuff like that, that is now our menu. You can see photos of our menu," he said.

Luna’s customers who do choose to sit inside will also notice that tables have been spread six feet apart to comply with social distancing guidelines.

Anyone who is taking part in indoor dining in New Jersey is expected to wear a mask at all times except when eating or drinking. Servers will also be wearing masks at all times.

In Manhattan, the topic of conversation among those in the restaurant industry is how long they’ll be able to go without indoor dining.

Those who represent New York City’s hospitality industry say restaurants are ready to bring back indoor dining and do it safely.

"The reality is that NYC has met and sustained and exceeded all the health metrics that have allowed restaurant throughout the rest of the state indoors at 50 percent occupancy for the past two months," said Andrew Rigie, executive director of the NYC Hospitality Alliance.

With the option available just across the river, feelings are mixed on whether they’ll lose business to places in New Jersey. What they agree on is that they’ll be in trouble if indoor dining isn’t approved soon.

"I dont think we will lose business at this point," said Dominick Pepe, corporate chef for The Group NYC. "They just reopened, and I don't see a lot of New Yorkers going to New Jersey."

"We will lose the business," said Emil Stefanov, general manager at Boucherie in the West Village. "Especially now when the weather starts getting colder, it's going to get a lot worse, and not knowing is the scariest thing of all."

Many New Jersey restaurants have run into one hurdle in bringing back indoor dining. They say staffing has been an issue as they look to bring more people back to take care of the additional customers.