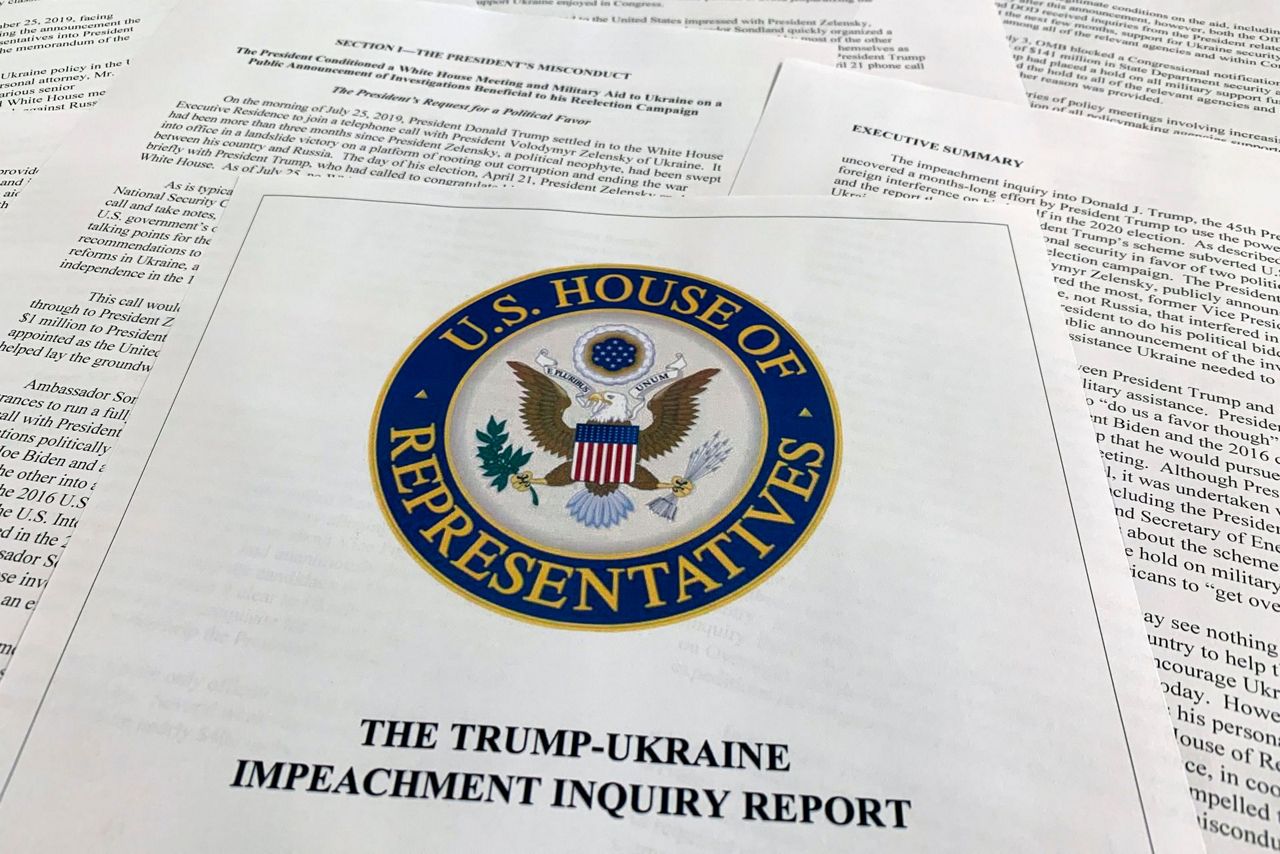 1 of 8
The report from Democrats on the House Intelligence Committee on the impeachment inquiry into President Donald Trump is photographed in Washington, Tuesday, Dec. 3, 2019. The House released a sweeping impeachment report outlining evidence of what it calls Trump’s wrongdoing toward Ukraine. The findings will serve as the foundation for debate over whether the 45th president should be removed from office. (AP Photo/Jon Elswick) 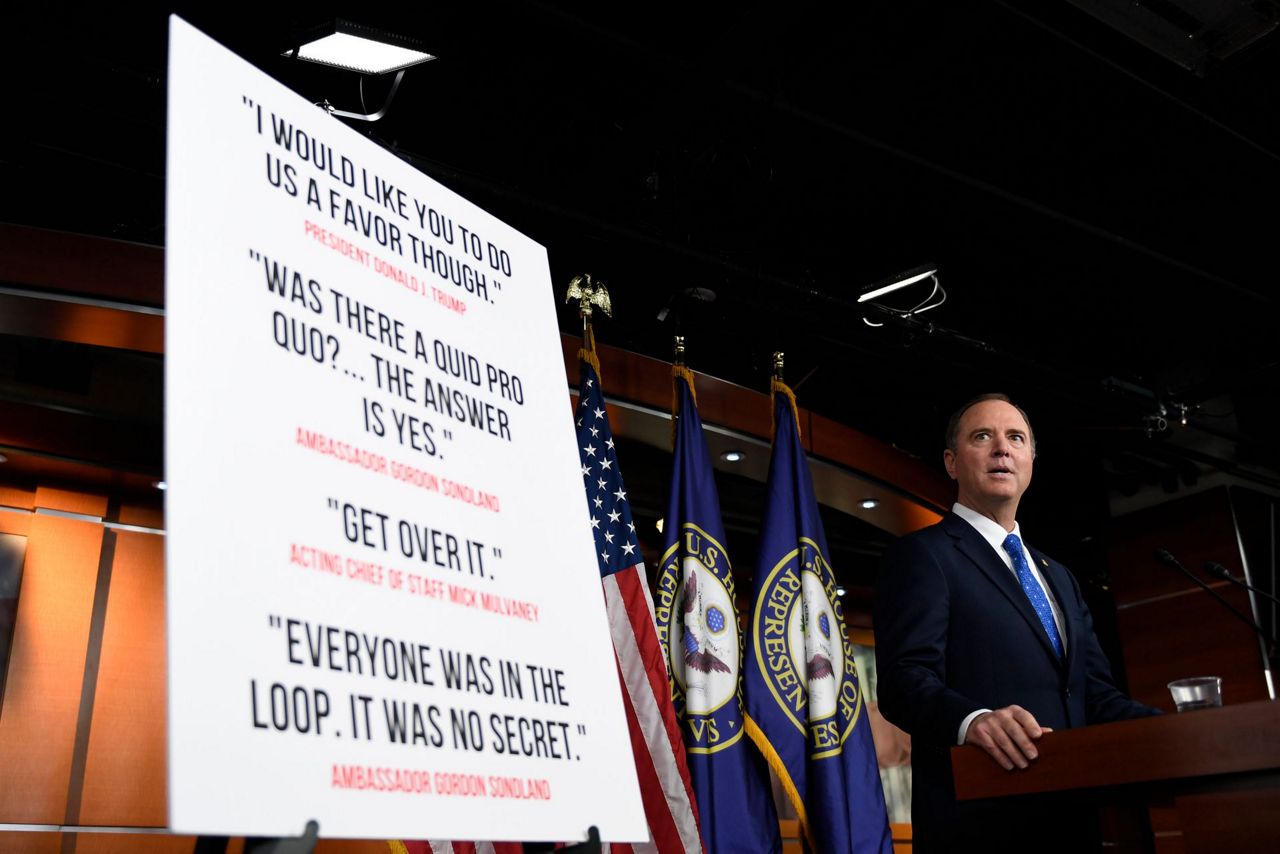 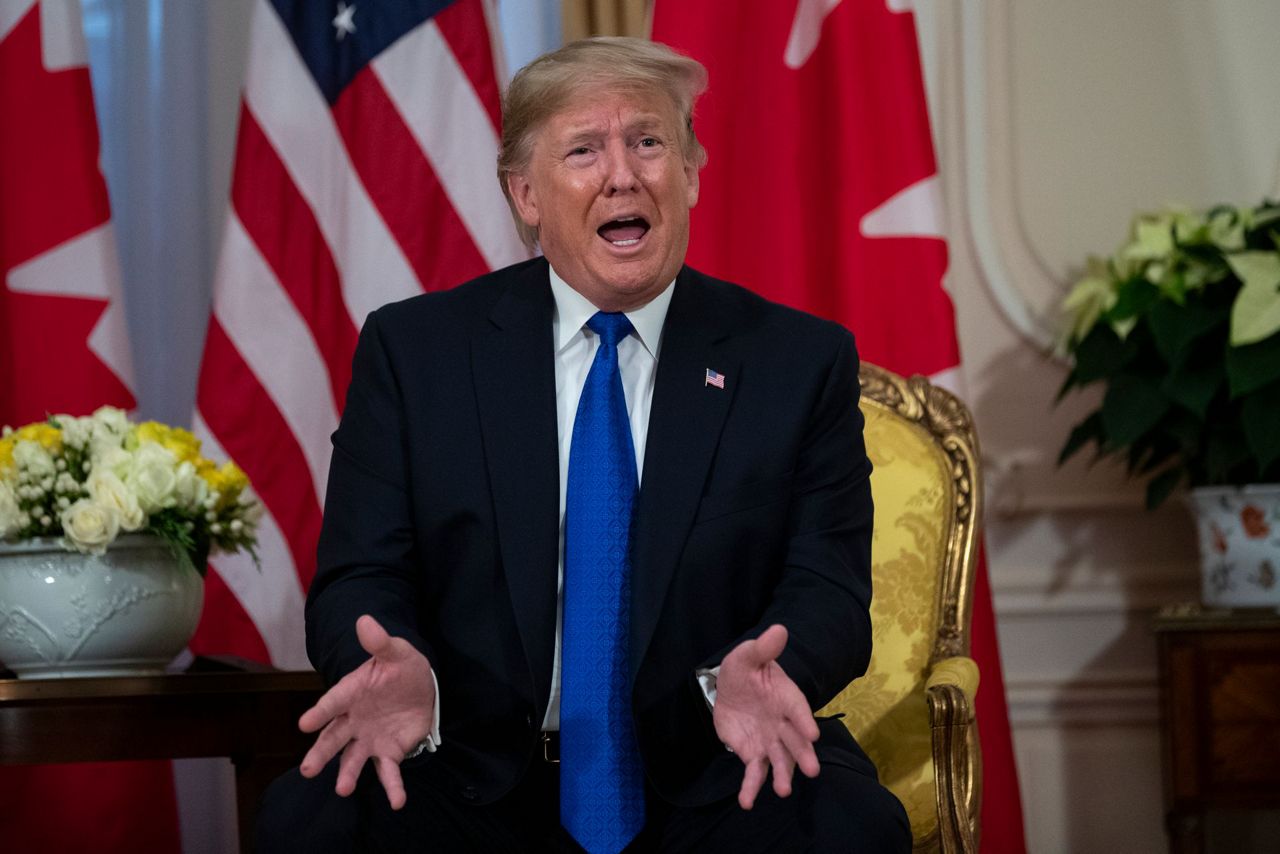 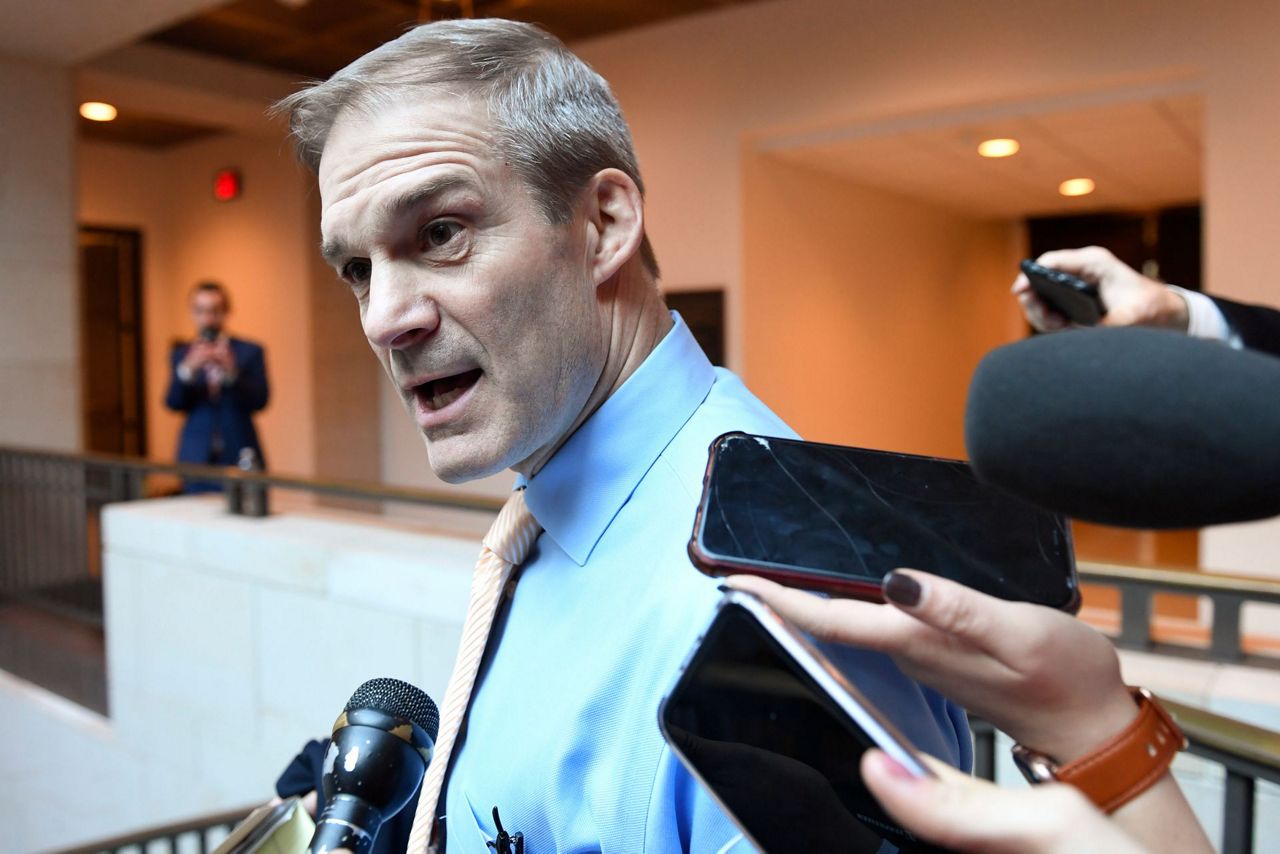 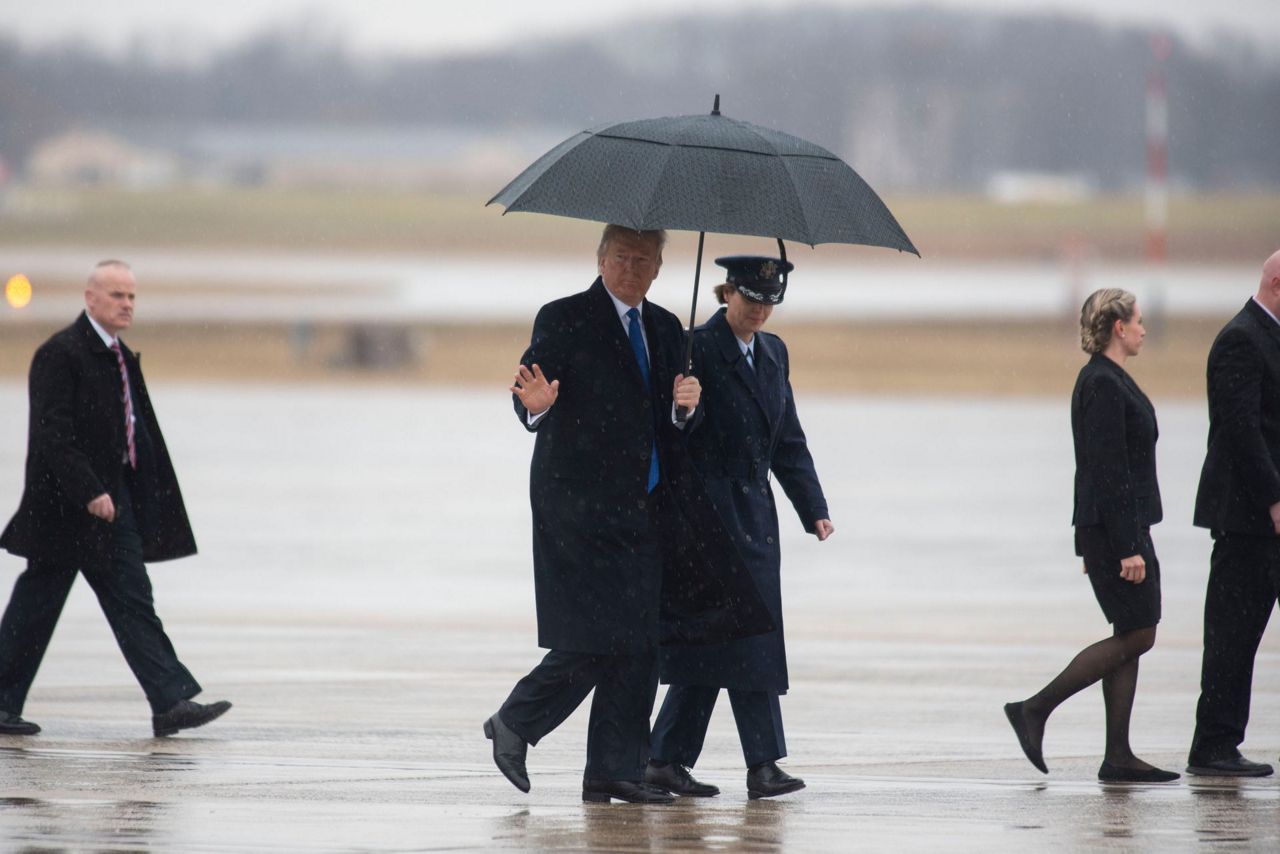 5 of 8
President Donald Trump waves as he walks towards Air Force One on Monday, Dec. 2, 2019, at Andrews Air Force Base, Md., for a trip to the NATO Summit in London. (AP Photo/Kevin Wolf)

6 of 8
The report from Democrats on the House Intelligence Committee on the impeachment inquiry into President Donald Trump is photographed in Washington, Tuesday, Dec. 3, 2019. The House released a sweeping impeachment report outlining evidence of what it calls Trump’s wrongdoing toward Ukraine. The findings will serve as the foundation for debate over whether the 45th president should be removed from office. (AP Photo/Jon Elswick) 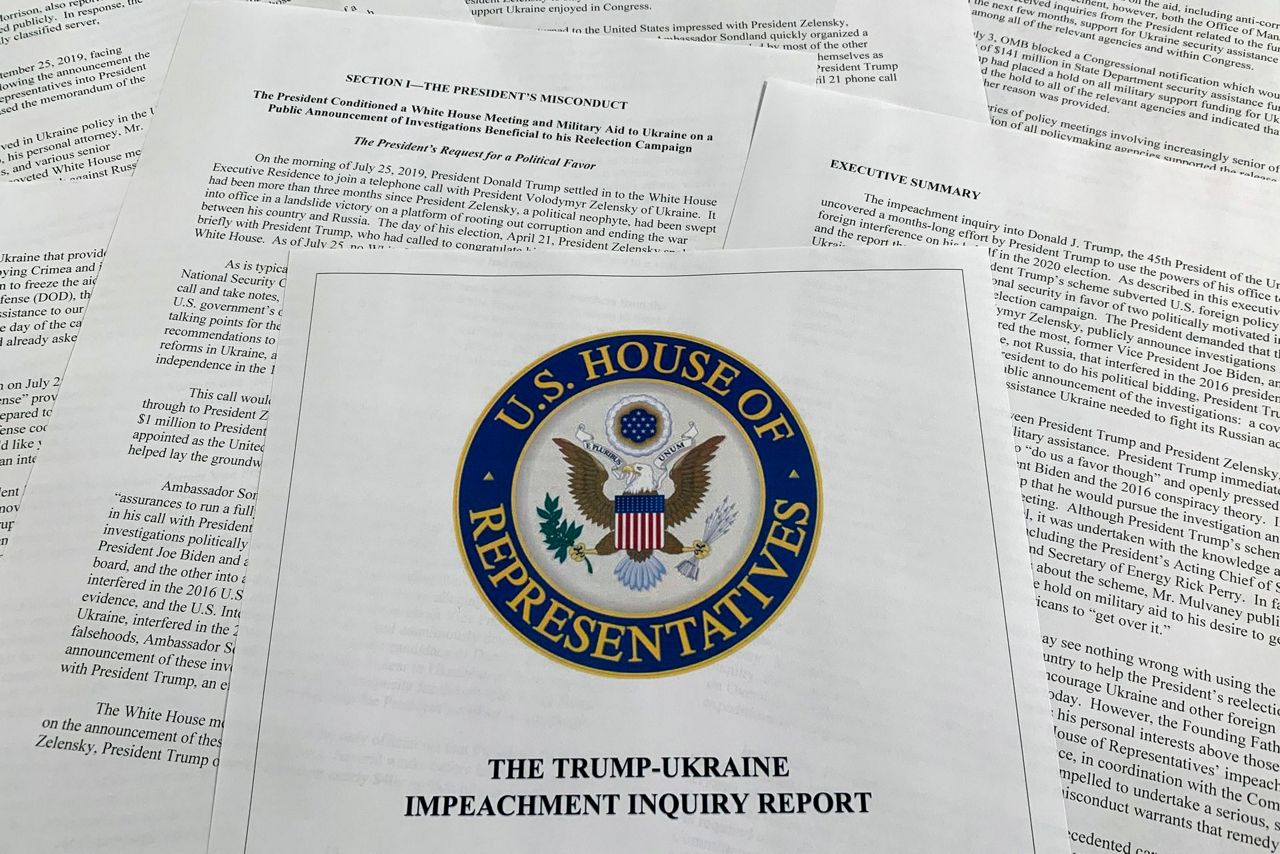 7 of 8
The report from Democrats on the House Intelligence Committee on the impeachment inquiry into President Donald Trump is photographed in Washington, Tuesday, Dec. 3, 2019. The House released a sweeping impeachment report outlining evidence of what it calls Trump’s wrongdoing toward Ukraine. The findings will serve as the foundation for debate over whether the 45th president should be removed from office. (AP Photo/Jon Elswick)

WASHINGTON (AP) — In a sweeping impeachment report, t he House on Tuesday outlined evidence of “significant misconduct” by President Donald Trump toward Ukraine, findings that will now underscore a debate over whether the 45th president should be removed from office.

The 300-page report from Democrats on the House Intelligence Committee makes the case that Trump misused the power of his office for personal political gain and, in the course of their investigation, obstructed Congress by stonewalling the proceedings like no other president in history.

The report does not render a judgment on whether Trump’s actions stemming from a July 25 phone call with Ukraine rise to the level of “high crimes and misdemeanors” warranting impeachment. That is for Congress to decide. Debate will begin Wednesday at a landmark hearing of the House Judiciary Committee.

"We have a very difficult decision ahead of us to make," said Chairman Adam Schiff, D-Calif., in releasing the findings. “This kind of conduct by a president of the United States, putting his own personal political interest above the interest of the American people, is exactly why they prescribed a remedy as extraordinary as the remedy of impeachment."

In a statement, White House Press Secretary Stephanie Grisham said, “Chairman Schiff and the Democrats utterly failed to produce any evidence of wrongdoing by President Trump.” She said the report "reads like the ramblings of a basement blogger straining to prove something when there is evidence of nothing.”

The president, at a NATO meeting in London, called the impeachment effort by rival Democrats “unpatriotic,” and said he wouldn't be watching Wednesday's hearing.

The "Trump-Ukraine Impeachment Inquiry Report” provides a detailed, stunning, account of a shadow diplomacy run by Trump attorney Rudy Giuliani, resulting in layers of allegations that can be distilled into specific acts, like bribery or obstruction, and the more amorphous allegation that Trump abused his power by putting his interests above the nation.

Based on two months of investigation sparked by a still-anonymous government whistleblower's complaint, the report relies heavily on testimony from current and former U.S. officials who defied White House orders not to appear.

The inquiry found that Trump "solicited the interference of a foreign government, Ukraine, to benefit his reelection," Schiff wrote in the report's preface. In doing so, the president “sought to undermine the integrity of the U.S. presidential election process, and endangered U.S. national security,” the report said.

The House intelligence panel voted later Tuesday, in a party-line tally, to send the document to the Judiciary Committee.

Republicans defended the president in their own 123-page rebuttal claiming Trump never intended to pressure Ukraine when he asked for a “favor” — investigations of Democrats and Joe Biden. They say the military aid the White House was withholding was not being used as leverage, as Democrats claim — and besides, the $400 million was ultimately released, although only after a congressional outcry. Democrats, they argue, just want to undo the 2016 election.

Along with evidence revealed in earlier testimony, the report included previously unreleased cell phone records, including Giuliani's calls raising fresh questions about interactions with the top Republican on the intelligence panel, Rep. Devin Nunes of California, and the White House.

For Republicans falling in line behind Trump, the inquiry is simply a “hoax.” Trump criticized the House for pushing forward with the proceedings while he was overseas, a breach of political decorum that traditionally leaves partisan differences at the water’s edge.

House GOP Leader Kevin McCarthy called on Democrats to end the impeachment “nightmare." He said, “They’re concerned if they do not impeach this president they cant beat him in an election."

The report will lay the foundation for the Judiciary Committee to assess potential articles of impeachment, presenting a history-making test of political judgment with a case that is dividing Congress and the country.

In prefacing it, Schiff drew deeply from history, citing George Washington, Alexander Hamilton and other Founding Fathers, to explain grounds for impeachment “as a remedy of last resort.”

Democrats once hoped to sway Republicans to consider Trump's removal, but they are now facing a ever-hardening partisan split over the swift-moving proceedings on impeaching the president.

House Speaker Nancy Pelosi faces a critical moment of her leadership as she steers the process ahead after initially resisting the impeachment inquiry, warning it was too divisive for the country and required bipartisan support.

Possible grounds for impeachment are focused on whether Trump abused his office as he pressed Ukrainian President Volodymyr Zelenskiy to open investigations into Trump’s political rivals. At the time, Trump was withholding $400 million in military aid, jeopardizing key support as Ukraine faces an aggressive Russia at its border.

The report also accuses Trump of becoming the “first and only'' president in U.S. history to "openly and indiscriminately" defy House's constitutional authority to conduct the impeachment proceedings by instructing officials not to comply with subpoenas for documents and testimony.

For Democrats marching into what is now a largely partisan process, the political challenge if they proceed is to craft the impeachment articles in a way that will draw the most support from their ranks and not expose Pelosi’s majority to messy divisions, especially as Republicans stand lockstep with the president.

While liberal Democrats are pushing the party to go further and incorporate the findings from former Special Counsel Robert Mueller’s report on Russian interference in the 2016 election and other actions by Trump, more centrist and moderate Democrats prefer to stick with the Ukraine matter as a simpler narrative that Americans understand.

Trump’s campaign is spending robustly to run ads against front-line freshmen lawmakers, many from districts Trump won in 2016 but that flipped in 2018 to give Democrats the House majority. Pelosi will be protective of these lawmakers as the proceedings unfold.

Hearing from legal experts at Wednesday's session, Democrats could begin drafting articles of impeachment against the president in a matter of days. The Judiciary Committee could vote next week and the full House Could vote by Christmas. Then it moves to the Senate for a trial in 2020.

The White House declined an invitation to participate Wednesday, with counsel Pat Cipollone denouncing the proceedings as a “baseless and highly partisan inquiry.”

Trump had previously suggested he might be willing to offer written testimony under certain conditions, though aides suggested they did not anticipate Democrats would ever agree to them.

Cipollone, who will brief Senate Republicans on Wednesday, left open the question of whether White House officials would participate in additional House hearings.

Republicans on the committee, led by Rep. Doug Collins of Georgia, plan to use procedural moves to stall the process and portray the inquiry as unfair to the president.

House rules provide the president and his attorneys the right to cross-examine witnesses and review evidence before the committee, but little ability to bring forward witnesses of their own.