LIVE UPDATESHow Coronavirus is Impacting New York
GET OUR APPOur Spectrum News app is the most convenient way to get the stories that matter to you. Download it here.
Vaccine FAQHow to Get the COVID-19 Vaccine in NYC
Off Topic/On Politics PodcastNavigating the new vaccine mandate
You Decide PodcastWhat’s next for NYC: The changing streets of New York
Crosstown PodcastWhat the future workplace means for New York City 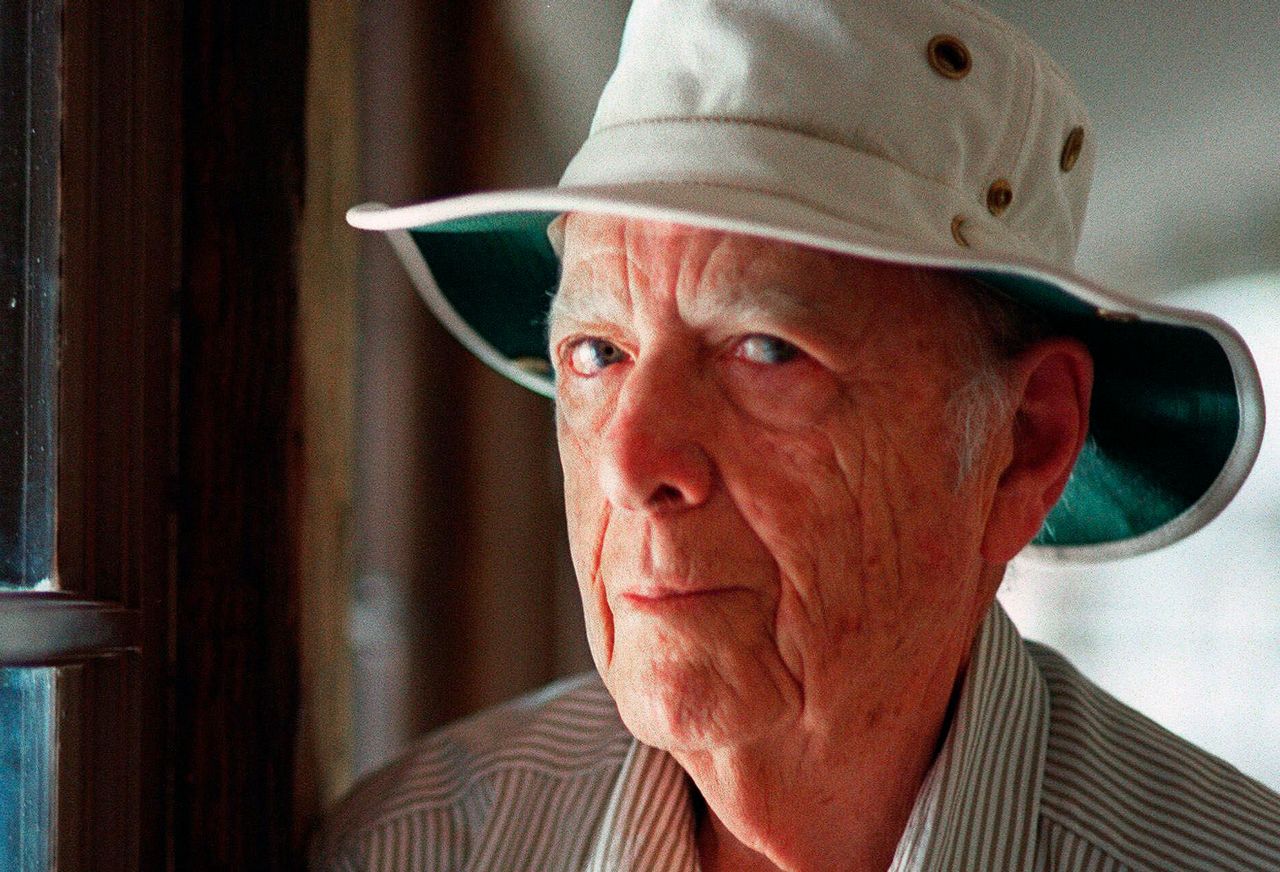 NEW YORK (AP) — Herman Wouk, the versatile, Pulitzer Prize winning author of such million-selling novels as "The Caine Mutiny" and "The Winds of War" whose steady Jewish faith inspired his stories of religious values and secular success, died on Friday at 103.

Wouk was just 10 days shy of his 104th birthday and was working on a book until the end, said his literary agent Amy Rennert.

Rennert said Wouk died in his sleep at his home in Palm Springs, California, where he settled after spending many years in Washington, D.C.

Among the last of the major writers to emerge after World War II and first to bring Jewish stories to a general audience, he had a long, unpredictable career that included gag writing for radio star Fred Allen, historical fiction and a musical co-written with Jimmy Buffett. He won the Pulitzer in 1952 for "The Caine Mutiny," the classic Navy drama that made the unstable Captain Queeg, with the metal balls he rolls in his hand and his talk of stolen strawberries, a symbol of authority gone mad. A film adaptation, starring Humphrey Bogart, came out in 1954 and Wouk turned the courtroom scene into the play "The Caine Mutiny Court-Martial."

Other highlights included "Don't Stop the Carnival," which Wouk and Buffett adapted into a musical, and his two-part World War II epic, "The Winds of War" and "War and Remembrance," both of which Wouk himself adapted for a 1983, Emmy Award-winning TV miniseries starring Robert Mitchum. "The Winds of War" received some of the highest ratings in TV history and Wouk's involvement covered everything from the script to commercial sponsors.

Wouk (pronounced WOKE) was an outsider in the literary world. From Ernest Hemingway to James Joyce, major authors of the 20th century were assumed either anti-religious or at least highly skeptical. But Wouk was part of a smaller group that included C.S. Lewis, Chaim Potok and Flannery O'Connor who openly maintained traditional beliefs. One of his most influential books was "This Is My God," published in 1959 and an even-handed but firm defense of Judaism. For much of his life, he studied the Talmud daily and led a weekly Talmud class. He gave speeches and sermons around the country and received several prizes, including a lifetime achievement award from the Jewish Book Council. During his years in Washington, the Georgetown synagogue he attended was known unofficially as "Herman Wouk's synagogue."

Jews were present in most of Wouk's books. "Marjorie Morningstar," published in 1955, was one of the first million-selling novels about Jewish life, and two novels, "The Hope" and "The Glory," were set in Israel.

Wouk had a mixed reputation among critics. He was not a poet or social rebel, and shared none of the demons that inspired the mad comedy of Philip Roth's "Portnoy's Complaint." Even anthologies of Jewish literature tended to exclude him. Gore Vidal praised him, faintly, by observing that Wouk's "competence is most impressive and his professionalism awe-inspiring in a world of lazy writers and TV-stunned readers."

But Wouk was widely appreciated for the uncanniness of his historical detail, and he had an enviably large readership that stayed with him through several long novels. His friends and admirers ranged from Israeli Prime Ministers David Ben-Gurion and Yitzhak Rabin to Nobel laureates Saul Bellow and Elie Wiesel. President Ronald Reagan, in a 1987 speech honoring 37 sailors killed on the USS Stark, quoted Wouk: "Heroes are not supermen; they are good men who embody — by the cast of destiny — the virtue of their whole people in a great hour."

Wouk was well remembered in his latter years. In 1995, the Library of Congress marked his 80th birthday with a symposium on his career; historians David McCullough, Robert Caro, Daniel Boorstin and others were present. In 2008, Wouk received the first ever Library of Congress Award for Lifetime Achievement in the Writing of Fiction. He published the novel "The Lawgiver" in his 90s and at age 100 completed a memoir. Wouk's longevity inspired Stephen King to title one story "Herman Wouk is Still Alive."

The son of Russian Jews, Wouk was born in New York in 1915. The household was religious — his mother was a rabbi's daughter — and devoted to books. His father would read to him from Sholem Aleichem, the great Yiddish writer. A traveling salesman sold his family the entire works of Mark Twain, who became Wouk's favorite writer, no matter how irreverent on matters of faith.

"I found it all very stimulating," Wouk, in a rare interview, told The Associated Press in 2000. "His work is impregnated with references to the Bible. He may be scathing about it, but they're there. He's making jokes about religion, but the Jews are always making jokes about it."

Wouk majored in comparative literature and philosophy at Columbia University and edited the college's humor magazine. After graduation, he followed the path of so many bright, clever New Yorkers in the 1930s: He headed for California, where he worked for five years on Fred Allen's radio show.

If war had not intruded, he might have stuck to comedy sketches. After the bombing of Pearl Harbor he enlisted in the Navy and served as an officer in the Pacific. There, he received the writer's most precious gift, free time, and wrote what became his first published novel, the radio satire "Aurora Dawn."

"I was just having fun. It had never occurred to me write a novel," he said.

By the time "Aurora Dawn" came out, in 1947, Wouk was married and living in New York. His novel was a Book-of-the-Month Club selection and he would soon publish "City Boy," a coming-of-age story highly influenced by Twain.

In 1951, Wouk released his most celebrated novel, "The Caine Mutiny." It sold slowly at first but eventually topped best-seller lists and won a Pulitzer. For a time, Wouk was compared to other World War II novelists: Norman Mailer, Irwin Shaw, James Jones.

But his next book looked into domestic matters. Wouk spoke often of his concern about assimilation and this story told of an aspiring Jewish actress whose real name was Marjorie Morgenstern. Her stage name provided the novel's title, "Marjorie Morningstar."

"My agent was absolutely appalled," Wouk said. "He submitted it to the editor of a women's magazine and the editor said, 'Herman Wouk has destroyed himself. He's a man who writes big, sweeping dramas about men in action. Then he writes about this girl and nothing happens. He should burn this book and forget it.'"

But like "The Caine Mutiny," the novel sold millions and was made into a movie, starring Natalie Wood. (Wouk eventually bought Wood's former home in Palm Springs). He was famous enough to appear on the cover of Time magazine, even as some Jews complained his book perpetuated stereotypes and critics complained he was too old-fashioned, too accepting of authority.

Captain Queeg, for example, may be a villain in popular culture, but "The Caine Mutiny" was not "Catch-22." Wouk was just as hard on the officers who rebelled against Queeg. The "crux" of the story, Wouk wrote in his journal, was that the "mutiny was a mistake" and the crew should have stood by its leader, however flawed.

Over the years, Wouk responded to criticism in two ways: He didn't judge the characters in his stories, but tried to tell the truth; and whether he really challenged authority depended on what you thought needed challenging.

He believed that among writers, anti-conformity was a kind of conformity. "It seems curious," he wrote in "Aurora Dawn," ''that life 'as it really is,' according to modern inspiration, contains a surprising amount of fornication, violence, vulgarity, unpleasant individuals, blasphemy, hatred, and ladies' underclothes."

Wouk knew others didn't share his views. Both "This Is My God" and "The Will to Live On" took a similar approach to "Mere Christianity" and other works by C.S. Lewis. They preached not to the converted, but to the curious. They anticipated arguments about religion and tried their best to answer them.

His books followed no proven formula. They were all personal, from the works on religion to "Inside, Outside," an autobiographical novel he considered his favorite.

"I'm not out front as a figure, and that suits me," he told the AP. "I love the work and it's the greatest possible privilege to say, 'Here are these books that exist because I had to write them.' The fact that they were well received is just wonderful."

In 1945, Wouk married Betty Sarah Brown, who also served as his agent. They had three sons— Nathaniel, Joseph and their eldest, Abraham, who drowned in 1951, a death that left Wouk with "the tears of the scar of a senseless waste."