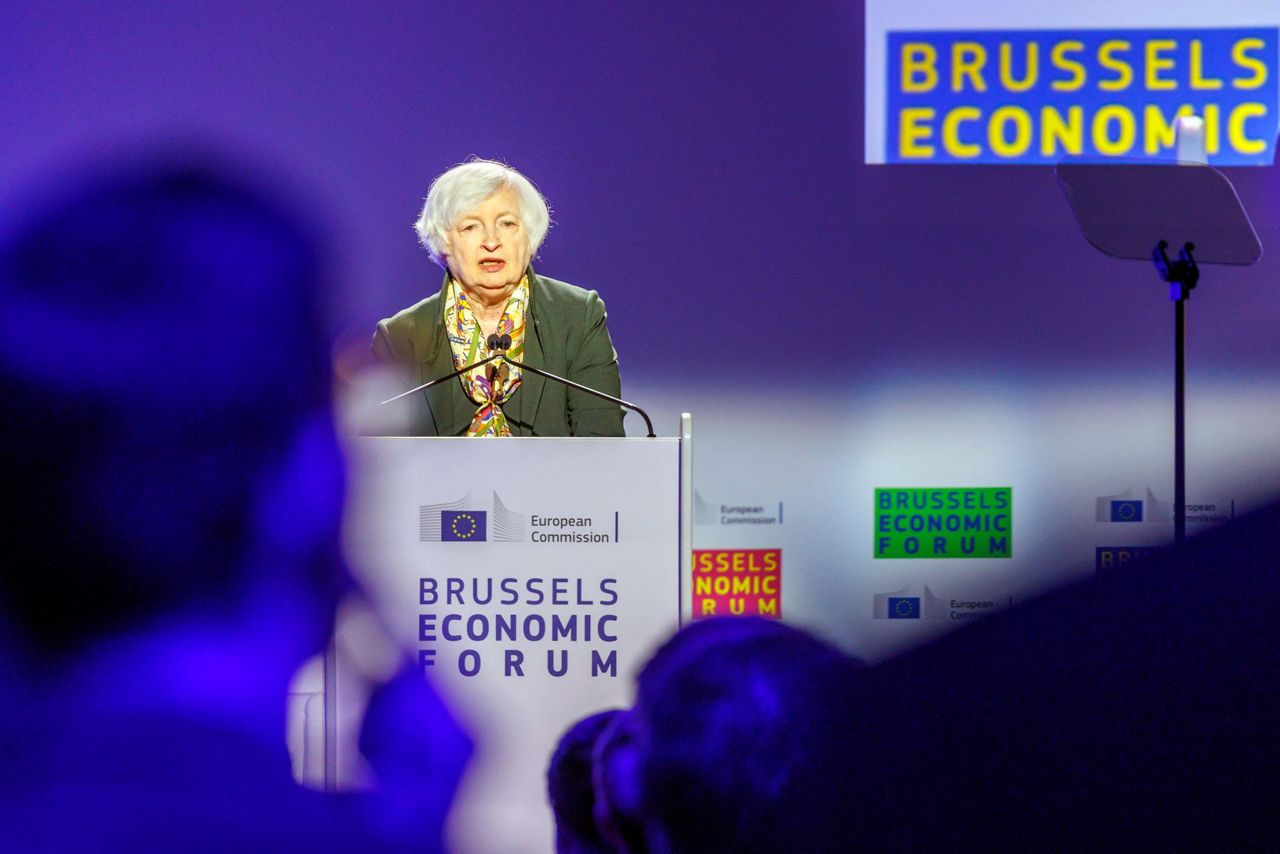 United States Treasury Secretary Janet Yellen delivers the Tommaso Padoa Schioppa Lecture at the Brussels Economic Forum 2022 in Brussels, Tuesday, May 17, 2022. Secretary Yellen focussed on the way forward for the global economy in the wake of Russia's brutal war against Ukraine, and discussed the unmet challenges that would benefit from multilateral cooperation in the years ahead. (AP Photo/Olivier Matthys)

BONN, Germany (AP) — Treasury Secretary Janet Yellen warned Wednesday that Russia's February invasion of Ukraine has produced a sharp increase in food and energy prices that is contributing to a slowdown in growth and creating greater risk of global stagflation.

“This is an environment that is filled with risk, both with respect to inflation and potential slowdowns,” Yellen said at a press conference ahead of Group of Seven finance ministers meetings this week in Bonn.

“The economic outlook globally is challenging and uncertain,” Yellen said. “And higher food and energy prices are having stagflationary effects, namely depressing output and spending and raising inflation all around the world.”

Stagflation occurs when inflation and unemployment are high and economic output is low.

Yellen added that the U.S. is “best positioned” to meet this economic challenge because of its strong jobs market, but she said that food shortages are a threat around the world that needs to be addressed.

Her comments came as U.S. and other officials rolled out a multi-billion dollar plan to address the food security problem, a key danger facing an increasingly fragile world economy. The U.S., several global development banks and other groups collaborated on the effort.

The European Bank for Reconstruction and Development, the Inter-American Development Bank, the International Fund for Agricultural Development and the World Bank will also contribute tens of billions in the coming months and years to support food producers and address supply shortage issues.

The plan stems from a meeting that Yellen convened in April at the International Monetary Fund and World Bank spring meetings, where she called on powerful nations to look for specific ways to combat a looming crisis over food insecurity around the globe that Russia’s war in Ukraine has made even worse.

Russia and Ukraine produce a third of the world’s wheat supply, and the loss of commodities due to the war has resulted in soaring food prices and uncertainty about the future of food security globally, especially in impoverished countries.

As part of the effort to address the crisis, Secretary of State Antony Blinken will also convene meetings in New York on the sidelines of the U.N. over the next two days focusing on food insecurity. The State Department says that in 2021, more than 193 million people worldwide experienced acute food insecurity, an increase of 40 million people from the year before. As many as 40 million are projected to be pushed into poverty and food insecurity by the end of the year.

Yellen said the U.S. Congress was moving forward with a package of $40 billion in security, economic, and humanitarian aid for Ukraine and that she would urge her G-7 counterparts “to join us in increasing their financial support to Ukraine. Ukraine has done remarkable work to repel Russia’s invasion but they need our help and they need it now.”

She added that Treasury was to unlikely to renew a provision, set to expire next week, that has eased Russia's ability to pay bondholders, furthering tightening financial pressures on Russia's Vladimir Putin.

Yellen said that liquidating Russian Central Bank reserves in other countries so that the money can be used to finance the defense of Ukraine “is not something that is legally permissible in the United States," but left the option open.

“In the current situation, such a procedure might take too long. We must secure Ukraine’s solvency now within days, a few weeks,” Lindner said. “As far as rebuilding Ukraine is concerned, for me it is politically conceivable to confiscate assets of the Russian state and use them for rebuilding in Ukraine."

While European nations plan to phase out of Russian oil and gas, the U.S. is pressing EU leaders to consider possible oil tariffs and other methods of preventing Russia from benefiting from increased energy prices.

Yellen said “tariffs, price caps, other possibilities” were being considered but no decisions have been made.

“This is important for Europe to decide what they think is best, but we continue to have those discussions and there are a lot of options,” she said.

AP Writer Geir Moulson in Berlin contributed to this report.