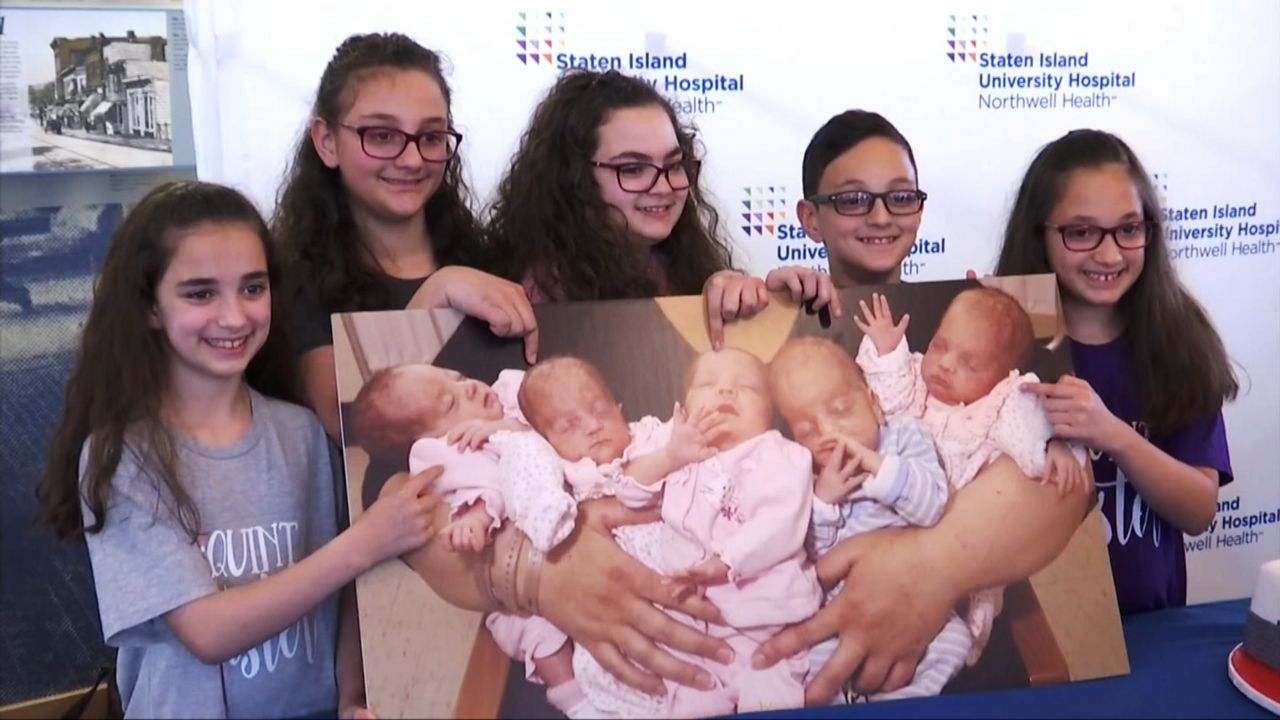 STATEN ISLAND - They call them "The Quints" - the four girls and one boy born a little more than 10 years ago - Staten Island's only known quintuplets.

Alessia, Amanda, Emily, Matthew and Ella Ferrante celebrated their belated birthday Monday at the hospital that helped bring them into the world.

"If I said thank you every day of my life, it wouldn't be enough," said Jamie Ferrante, the quints' mother.

The quints were born prematurely at just about 28 weeks on December 27, 2008.

Each weighed less than two and a half pounds and spent some in the neo-natal intensive care unit before being sent home.

Today, they are normal and healthy in every way. They are in the same 5th grade class at St. Christopher's School, play basketball and dream of being YouTube stars.

Matthew, the only boy in the pack, doesn't seem to mind being severely outnumbered by his sisters.

"It feels like I'm just playing with other people," he said.

The birthday party was timed to mark Multiple Birth Awareness month. Quintuplets are usually the result of fertility drugs, like the Ferrantes used. They're also extremely rare. Just one in 800,000 pregnancies results in five babies born at once.

"To look in and see 10 arms and 10 legs it was pretty amazing; make sure you're taking out the right arms with the right legs, to get each baby out intact was pretty cool," said Dr. Paul Heltzer of Staten Island University Hospital.

"Ten-year-old quintuplets who are in a mainstream 5th grade class who are participating in sports and doing all the usual things that 10-year-olds do, so that's an amazing outcome as far as I'm concerned," said Dr. Philip Roth of Staten Island University Hospital.

The Ferrantes drive a 15-seat van, shop in bulk, and all of the kids sleep on bunkbeds in the same room.

And their mother offers this parenting advice. Her key to surviving five babies at once?

"Take your time and really breathe it in," Ferrante said.