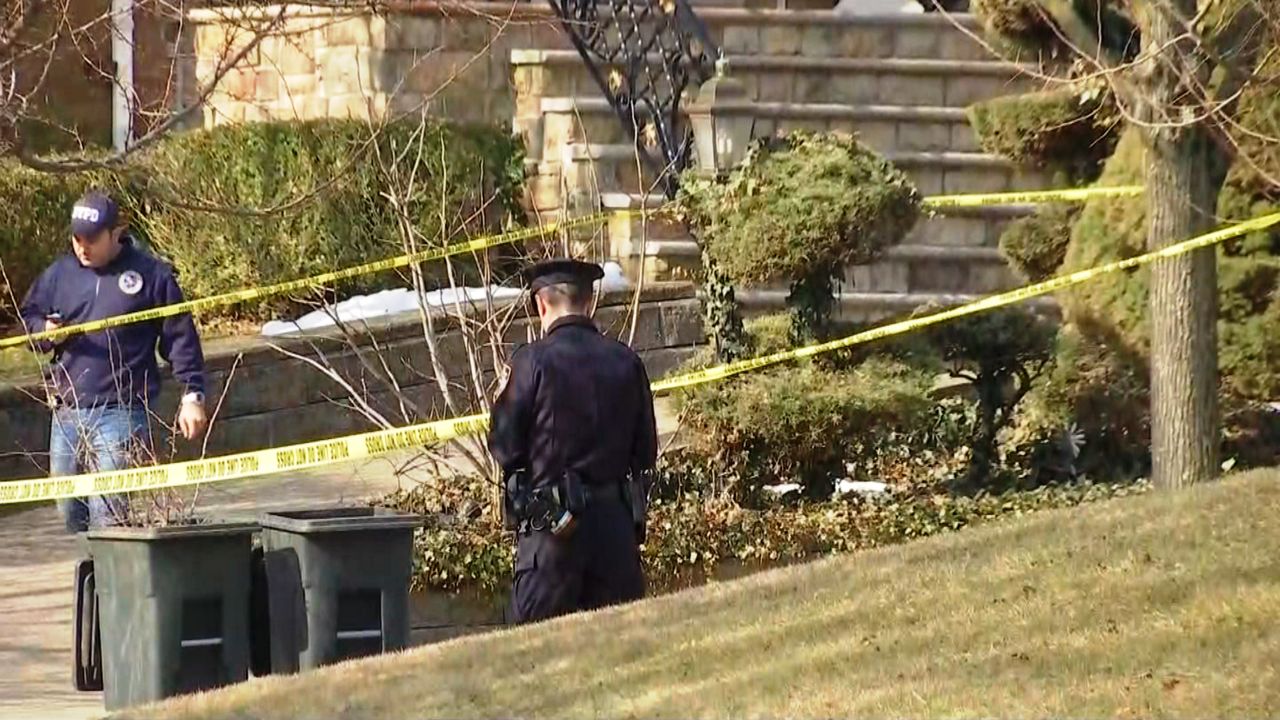 Investigators near the scene of a shooting in Todt Hill on Thursday, March 14, 2019. Sources say a reputed mobster was run over and fatally shot outside his home at the scene.

An investigation is underway after officials say a reputed New York mob boss was gunned down outside his home Wednesday night on Staten Island, the first Mafia boss to be shot to death in the city in decades.

The NYPD said officers responded around 9:15 p.m. to a 911 call of an assault in front of a house on Hilltop Terrace near 4 Corners Road in Todt Hill.

Sources said Francesco Cali, the head of the Gambino crime family, was shot near his car.

NYPD Chief of Detectives Dermot Shea said Thursday afternoon that Cali was struck by at least six bullets following a conversation with another person that occurred after Cali exited his home. Shea said approximately 12 shots were fired.

.@NYPDDetectives: He exits his home, there's a conversation, there's either an altercation or conversation and he's shot. The suspect is male, 25-40 years old.

Sources had initially told NY1 that Cali was run over by a car, but Shea said he believed those reports to be "inaccurate at this time."

"What I believe happened was, Mr. Cali was struck several times by gunfire. In trying to elude additional gunfire, [he] fled to the rear area of his private vehicle, and somebody probably thought he was run over, but it was more that he was trying to get underneath the truck to elude gunfire," Shea said.

Police said the 53-year-old was taken to Staten Island University Hospital, where he was pronounced dead.

Shea confirmed that reports of a car pulling away from the scene is accurate, but he said it is too soon to say that the car is definitively tied to the case, or that it is the only car tied to the incident. Sources told NY1 the driver got away in a blue pickup truck.​

Police sources with preliminary knowledge of the investigation told NY1 the 911 call came from another location.

NY1's @LindsayTuchman is at the scene where reputed New York mob boss Francesco Cali was shot and killed outside his Staten Island home.

"This is a very quiet area," one local resident tells her. "It's like a very peaceful environment and this is something really new for me." pic.twitter.com/jV1sPBdTdx

The shooting is a major development for organized crime in New York. Cali, known as Franky Boy, rose to prominence in 2015, when he replaced then-boss Domenico Cefalu.

Federal prosecutors in New York have tracked the Gambino crime family for some time. The rise to power of Cali, who is from Sicily, was seen as a major change in the power structure of organized crime in New York.

The Gambino family was once among the most powerful criminal organizations in the U.S., but federal prosecutions in the 1980s and 1990s sent John Gotti and other top leaders to prison, diminishing its reach.

The last Mafia boss to be shot to death in New York City was Gambino don Paul Castellano, assassinated on Gotti's direction while getting out of a black limousine outside a high-end midtown Manhattan steakhouse in 1985. Gotti then took control of the family.

"We thought those days were over," Mayor Bill de Blasio said of Cali's slaying. "Very surprising, but I guess old habits die hard."

Cali kept a much lower profile than Gotti and was killed in far less spectacular fashion than Castellano.

Gotti, with his expensive double-breasted suits and overcoats and silvery swept-back hair, became known as the Dapper Don, his smiling face all over the tabloids. As prosecutors tried and failed to bring him down, he came to be called the Teflon Don.

In 1992, Gotti was convicted in Castellano's murder and a multitude of other crimes. He was sentenced to life in prison and died of cancer in 2002.

The Mafia's notoriety and influence have waned in New York City since then, but there have been flare-ups.

Last week, the longtime boss of the Colombo crime family, 85-year-old Carmine "the Snake" Persico, died at a North Carolina hospital near the federal prison where he had been serving what was effectively a life sentence. Persico was convicted in a 1986 case overseen by then-U.S. Attorney Rudy Giuliani.

Cali's only mob-related criminal conviction came a decade ago, when he pleaded guilty in an extortion scheme involving a failed attempt to build a NASCAR track on Staten Island. He was sentenced to 16 months behind bars and was released in 2009.

In that case, authorities intercepted conversations shedding light on his quiet underworld influence and popularity at home and abroad. An Italian mobster said Cali was "everything over there" in New York and referred to him as "a friend of ours."

A prosecutor echoed those sentiments at a 2008 bail hearing, saying Cali was seen "as a man of influence and power by organized crime members in Italy."