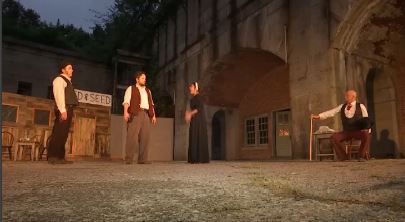 The Staten Island Shakespearean Theatre Company is kicking off "it’s" rendition of "Measure For Measure" this weekend at Fort Tompkins. It follows a sheriff in a morally loose town - leaving his strict deputy in charge. Tackling topics like women’s rights - an actor with the production says the play serves up themes that still have relevance today.

"This kind of lends itself to an old western theme. Where there’s a kind of a combination of Elizabethan Shakespeare and a Mel Brooks Blazing Saddles. "Measure For Measure" is a comedy, it’s a little bit of difficult comedy, but it is a comedy," said actor Daniel Duffy.

Admission to the performance is free. For shows this weekend and next - organizers encourage theatergoers to bring their own chairs due to limited seating.