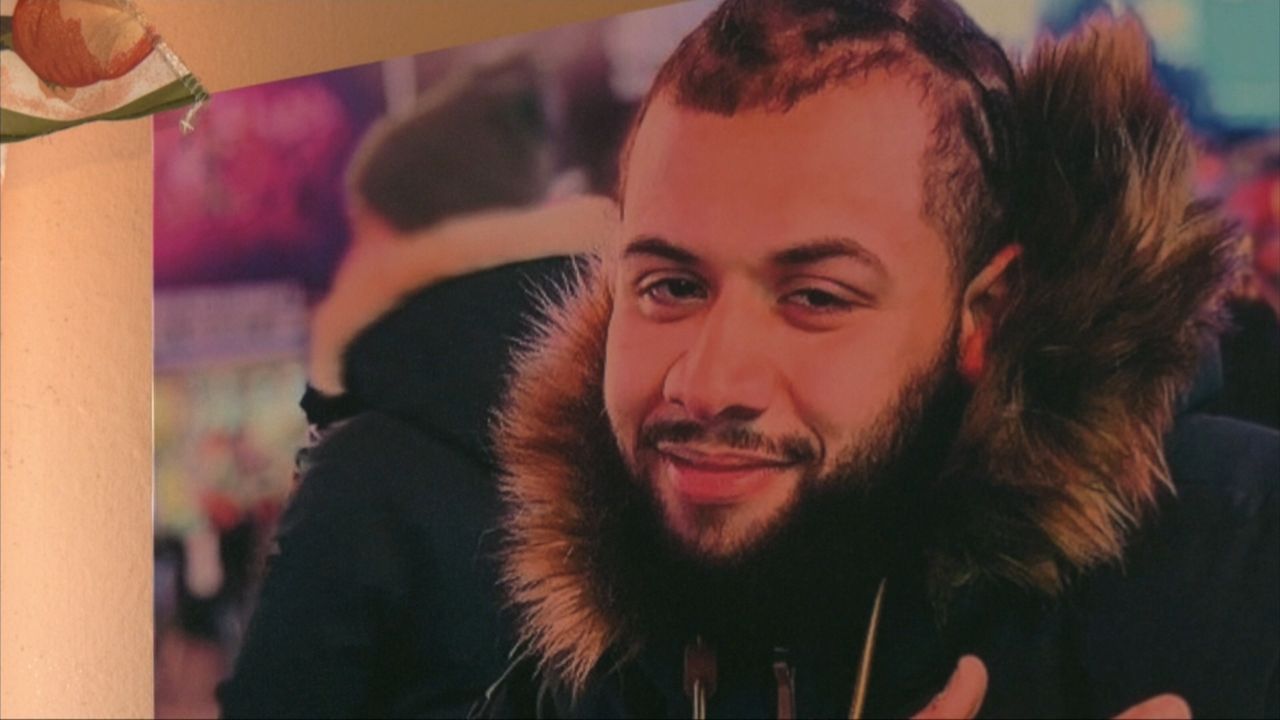 Brandon Rodriguez was 25 years old when he took his own life in an isolated shower pen while on Rikers Island in August of last year. (NY1 Photo)

An inside look at the lives lost on Rikers Island

His sneakers are encased in the dining room in a small transparent box. So is his Yankee hat.

“And then his ashes,” says Tamara Carter, gently touching an urn. “I’ve never seen something so beautiful.”

“There’s that awkward emptiness and no one wants to say what we’re missing,” she told NY1 this week while sitting down in her home in Westchester County. “And you can just tell in everyone’s face that there’s something missing, and that’s Brandon.”

“I miss his dancing,” she added. “He would just be sitting there, just start dancing out of nowhere. No music on. It’s like, what are you doing?”

Brandon Rodriguez was 25 years old when he took his own life in an isolated shower pen while on Rikers Island in August of last year.

“It kind of breaks me to feel that he was broken by being in there and if he did do this to himself, I think that was his only way out — so he thought,” she said.

Deaths on Rikers Island have become a common occurrence.

While visiting Rikers last month to tout the amount of contraband the Department of Correction has recovered, the mayor told reporters to examine exactly how some of these detainees passed away.

An examination of those deaths makes it clear many were not natural, but instead suicides and drug overdoses.

Of the fatalities where a cause of death has been determined, according to the city medical examiner’s office, there have been at least eight suicides in city jails or custody since the beginning of 2021, a clear indication of the mental health crisis occurring on the island.

“I believe all 26 since they couldn’t be kept safe, to me, they were all murdered,” Carter said. “If he got the mental health that he needed in there from the medical staff maybe he’d still be alive today.”

“I keep his cross from his funeral next to my bed, along with these two pictures and then a singular picture of him with a white candle,” Velasco said in an interview with NY1 this week.

Velasco says they had a toxic relationship — her husband was an alcoholic and a string of domestic violence episodes and calls to the police sent him to Rikers. There, she says, he deteriorated more.

“My husband was hopeless because of the system,” she said. “He had been in and out of jail so many times. He said to me on one of those phone calls — I said let them send them someplace where you can get help? The cops, the district attorney, everybody thinks there’s just help out there. There’s not. There’s just jail.”

It was his third suicide attempt on Rikers, she says. One, she says, was the same week he died.

“He tied a sheet up to the vent and then hung himself with it,” Velasco said. “And I don’t understand if he had a previous attempt that week why would they put him in a cell with bed linens if he had just tried to hang himself on Tuesday. Who does that?”

He died that Friday.

In both of these cases, these families have filed notices of claim with the city.

In Rodriguez’s case, the preliminary death report from the city’s Board of Correction is mostly redacted, but it states: “An initial review of the case highlights serious and recurring problems with the jail system’s current intake and housing assignment process that warrant further exploration in the context of ongoing staffing shortages, medical delays and an uptick of self-harm incidents in intake pen areas across the jails.”

His death is currently under investigation by the attorney general’s office. That office is still investigating 16 of these deaths.

It is not just suicides that are increasing on Rikers. It’s drug overdoses, too.

According to the medical examiner’s office, at least five detainees have died on Rikers Island since 2021 because of overdoses.

Several other deaths are believed to be suspected overdoses —including the most recent fatality this week of Elijah Muhammad.

The city already fired a correction officer for his role in that incident. A source in the department told NY1 the officer failed to respond to a clear medical emergency.

NY1 met Muhammad’s family and their lawyer in Lower Manhattan on Thursday. They plan to file a notice of claim with the city this week for $25 million.

The medical examiner is still reviewing this case and others.

In response to this story, a spokesperson for the Department of Correction sent NY1 this statement: “Any death in custody is a tragedy and we extend our deepest condolences to all the families who have lost a loved one. Following every death, we conduct an administrative investigation, implement policy review, and take corrective action when needed. Prior to the pandemic, deaths in custody were at their lowest, and unfortunately, like many other correctional systems across the country, we have seen a concomitant and tragic increase. We strive every day to do everything within our power to prevent deaths in custody.”