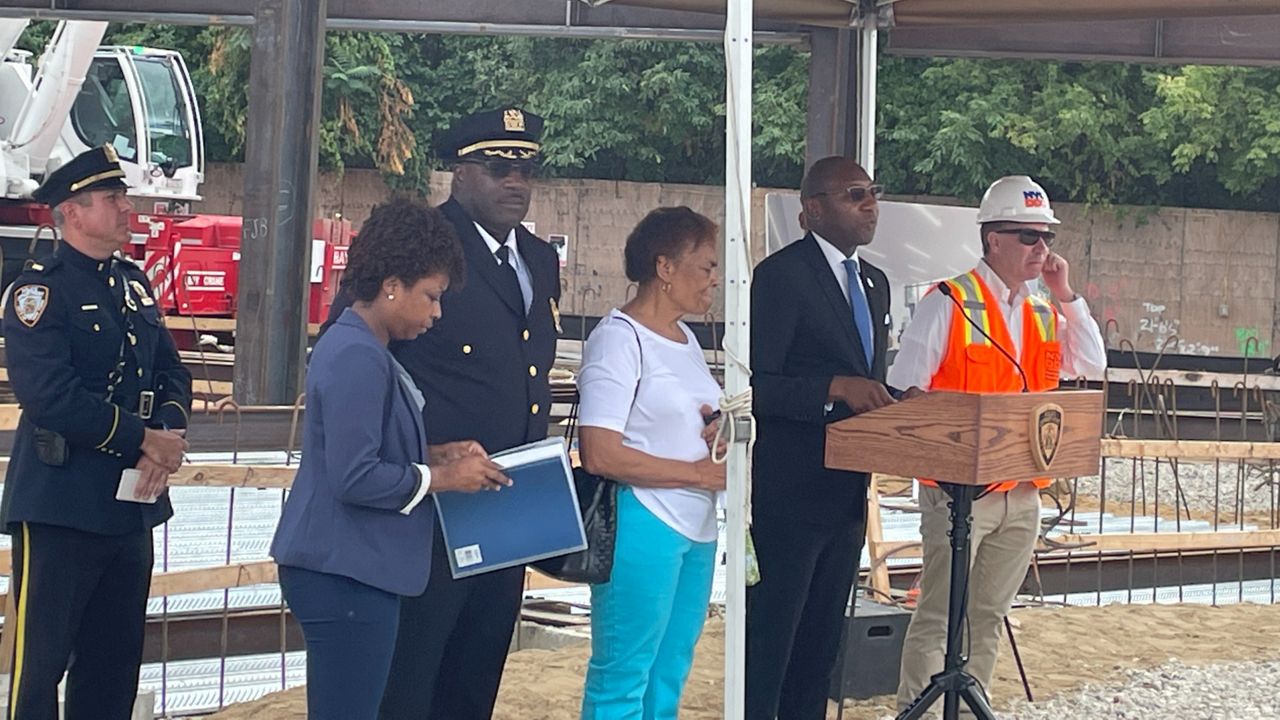 Since the early 1970’s, Bess DeBetham and other community members have been advocating for a new police precinct to serve Southeast Queens.

After over 40 years, their efforts are finally paying off.

“That was the hottest thing on our agenda, was getting the precinct,” she said.

Local, city and state leaders, including Mayor Eric Adams and Queens Borough President Donovan Richards, gathered in the Rosedale neighborhood of Queens Monday to celebrate the future 116th NYPD precinct that is currently under construction.

“This is our investment in public safety and justice,” Adams said. “You can have both.”

Officials held a topping-off ceremony at the construction site at  244-40 North Conduit Avenue by placing the final steel beam into place.

“Not only did we get a new precinct but we’re getting one with community space built right in it and out of the negotiations also came over 100 million dollars for a community center in Roy Wilkins Park,” Richards said.

The $104 million project comes after DeBetham, a long-time Laurelton resident, and other community members spent decades pushing city officials to invest in increasing public safety in their communities.

Currently, East and Southeast Queens are served solely by the 105th precinct, which has the largest geographic coverage area of any precinct in New York City.

As a result, it also has the longest response times of any NYPD precinct.

“The 105th precinct is simply too far in order to give us adequate public safety,” DeBetham said.

The future 116th precinct is expected to improve response times and increase public safety by absorbing some of the territory the 105th precinct covers, including Rosedale, Brookville, Springfield Gardens and Laurelton.

“And we now have the precinct and I am so grateful,” DeBetham said.

After receiving the green light in 2017, plans to build the precinct were scrapped in 2020 and funding was reallocated to build a community center in the nearby Roy Wilkins Park. Protesters and politicians across the country demanded community investments amid the “defund the police” movement following the murder of George Floyd by a Minneapolis police officer.

Even Richards, a former City Councilmember and a vocal supporter of the 116th precinct, reversed course and called for $1 billion in cuts to the NYPD budget.

Funding was restored in 2021 after local advocates, like DeBetham and Pecararo, kept the pressure on city leaders to build the precinct.

“There’s no defunding the police in this neighborhood,” Pecararo said. “We are not in favor of that. Never have, never will be.”

“As we say, no precinct, no vote.” DeBetham said.

The entire project is expected to be completed by early 2024.