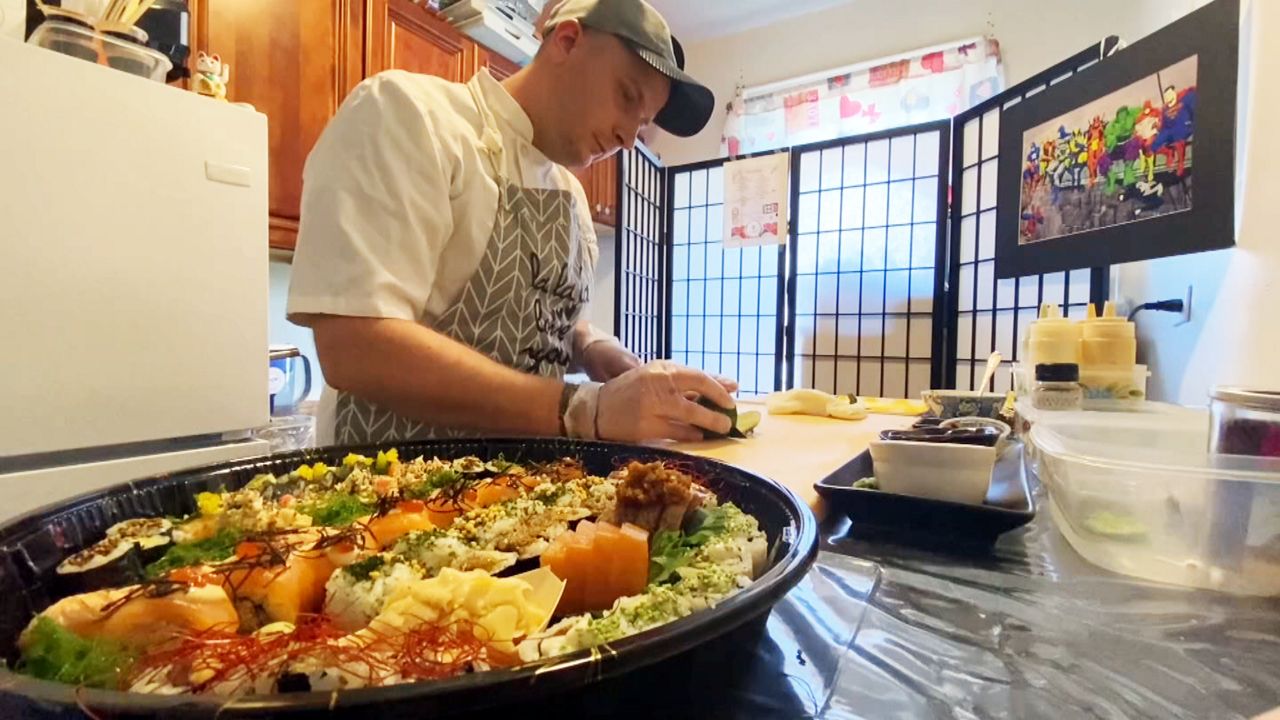 QUEENS, N.Y. — Macia Malnowski says he's perfected his sushi making skills after years of experience. But this isn't some fancy restaurant in Manhattan. It’s all being assembled in a small apartment kitchen in Jackson Heights.

“I start thinking, thinking. OK, sushi at home. Like people are probably going to be like this guy is crazy,” said Malnowski.

But Malnowski said it’s an idea just crazy enough to work. When the pandemic hit and the Polish-born chef was laid off from his job at a Michelin starred sushi restaurant in the West Village, he started making sushi at home.

“I start for fun to see if people are going to like it,” said Malnowski. “First client, second client, later it was like snowballed. Recommendation, recommendation. Now I can say I’m busy."

He's so busy, that instead of returning to his restaurant job on the weekends, he decided to dedicate those days to his home business SushiFella.

“I want to show people how it’s supposed to look. What they should expect from good sushi,” said Malnowski.

He’s not the only home chef making a profit during the pandemic. Recently, foodie website EatYourWorld.com profiled nine Queens businesses cooking out of their home kitchens. Many are located in Jackson Heights.

“We have the street food tradition in Jackson Heights and there’s so much diversity in the dining options, but also there’s a long tradition of doing this sort of thing among the immigrant communities here,” said Laura Siciliano-Rosen, the founder of Eat Your World.

Siciliano-Rosen says the home businesses have been largely successful — partly because they offer a different type of connection with a chef, than you would typically get in a restaurant.

“You start to really enjoy that experience of it and the intimacy with the chefs that it brings which I think is a big part of this, that I think people are craving a little bit of intimacy with things in general after a year plus of being in partial isolation,” said Siciliano-Rosen.

But the clock is ticking in Malnowski's kitchen. He's taking orders through the end of August. Then, he's moving to Florida and bringing his SushiFella concept with him. The goal is to eventually open a brick-and-mortar restaurant.