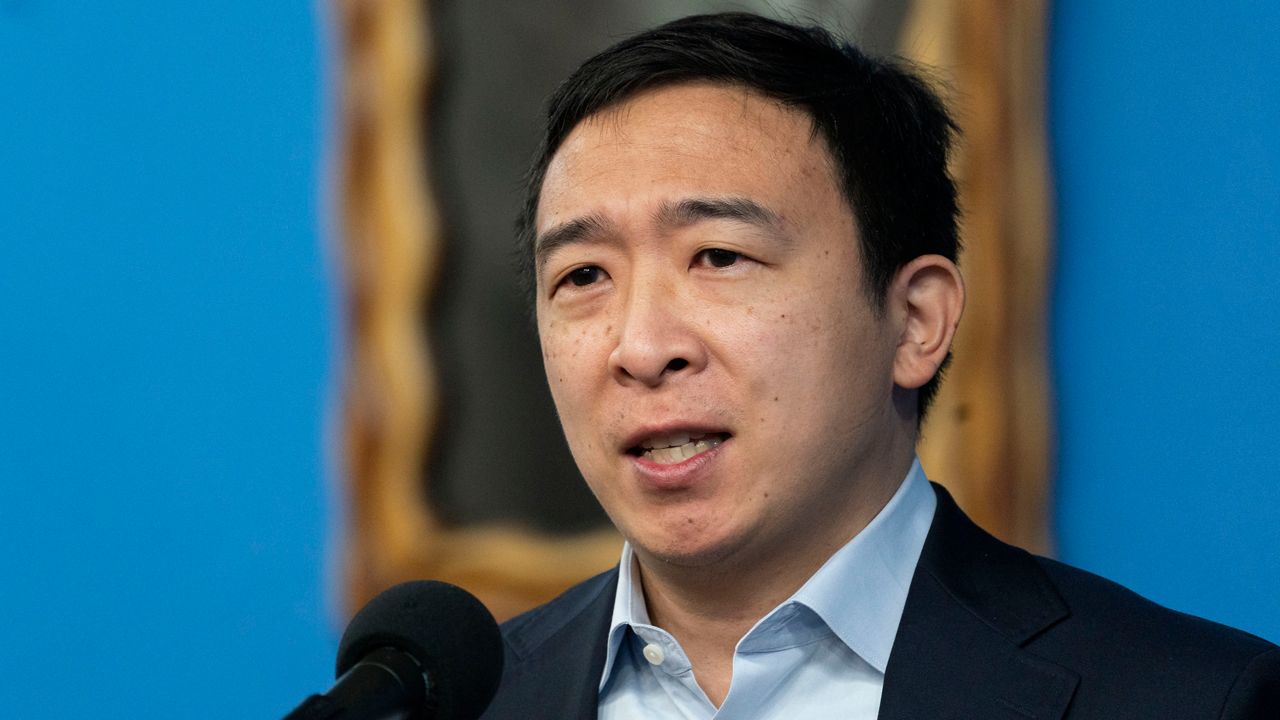 BROOKLYN — Andrew Yang was trying to lay out his vision for policing for New York at the corner of Parkside and Ocean Avenues in Brooklyn. Instead, several times on Thursday, he was unable to answer basic questions about key policing issues in the city.

He was also interrupted over and over again by a man holding a Maya Wiley poster, who continuously shouted about Yang's voting record.

Wiley's campaign manager took to Twitter to denounce the action, but the damage was already done.

Yang also seemed confused when asked about two of the most recent and significant police reforms in recent years — a ban on police officer chokeholds and the repeal of the 50-a law, which deals with police disciplinary records.

"Do you agree with the repeal of 50-a?" a reporter asked.

Yang responded: "The repeal of 50-a? This is not the mandatory interview. The records, the disciplinary records not being released?"

Edwin Raymond was on hand to assist Yang on Thursday. He's an NYPD lieutenant who is running for City Council in Brooklyn's 40th Council district. Raymond approached the campaign with his policing plan, parts of which Yang is now embracing.

The proposal calls for diversifying the department and creating a new "warning system" for low-level offenses.

"If a police officer sees an infraction, sees an issue, they can actually issue a warning as associated with that individual can be identified as high need," Yang said.

But when asked to elaborate, Yang once again turned to Raymond for help.

"So Edwin can talk about this," Yang said.

Raymond told NY1 he is not endorsing Yang's campaign.

It wasn't just policing questions that seemed to stump Yang on the trail Thursday.

"One thing that would be extraordinarily helpful would be to have shelters for victims of domestic violence," Yang said during a forum focused on family homelessness.

The city, in fact, already does provide such shelters. More than 3,000 New Yorkers live in them now. When made aware, Yang tried to pivot.

"Of course they do exist," Yang said. "So that's an aspect of something that we should be increasing."

Yang's campaign says he misspoke and that he is looking to experts like Raymond to craft plans.

But Thursday's stumbles also help cement a common line of attack from his opponents: That Yang isn’t ready to run the city.

Scott Stringer was in Manhattan highlighting recent donations by millionaires who have contributed to the campaigns of Yang and Eric Adams. He was critical of Yang's comments on Twitter.

To be this ignorant about something this important is yet another reason @AndrewYang is not fit to be mayor. These shelters exist. The next mayor needs a plan to make them more accessible: https://t.co/rp7Mqreyb1 https://t.co/fxK42tZqii

He also released a statement calling Yang's ignorance of the issues "dangerous and insulting."