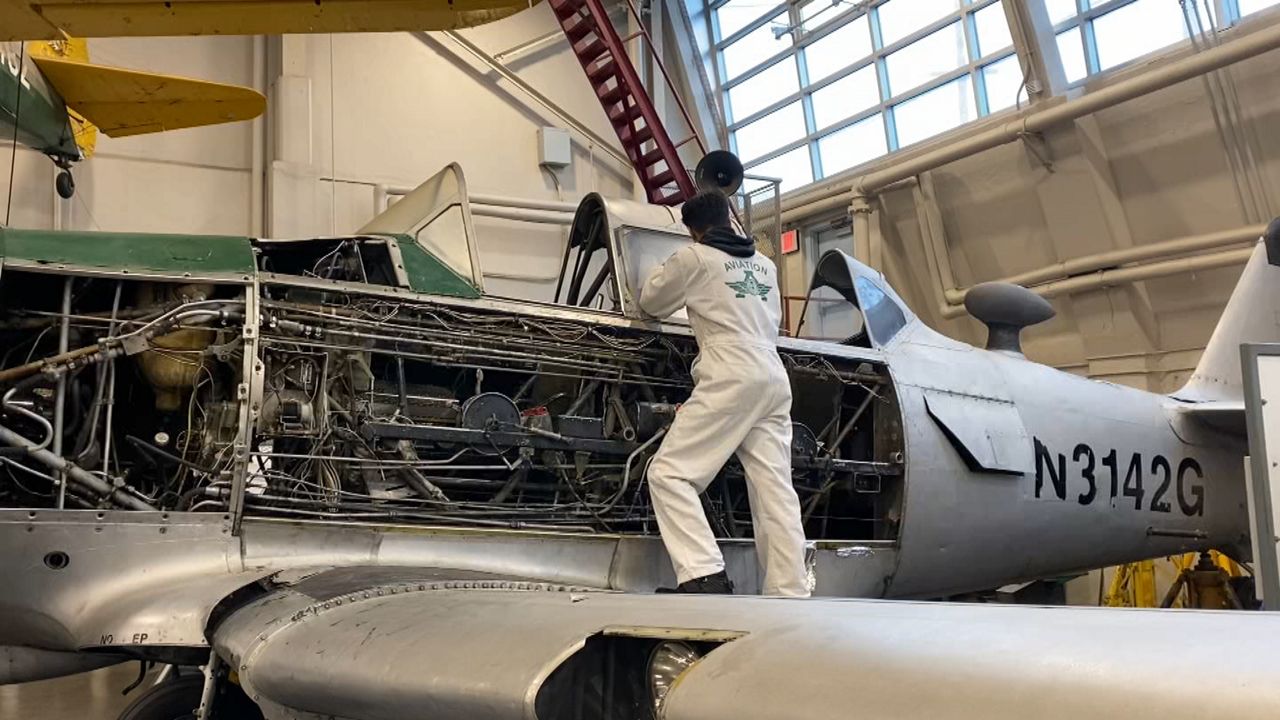 Students at Aviation High School learn how to maintain airplanes — some of them, dating back to World War II. (NY1 Photo)

An aircraft hangar isn’t something you might expect to find inside a public high school in Queens.

But at Aviation High School, it’s a necessity.

These students don’t just earn a high school diploma, they also earn Federal Aviation Administration maintenance licenses in either power plant, which focuses on the plane’s engines, or airframe, which covers the rest of the aircraft.

If students stay for a fifth year, they can earn both diplomas for free.

“Everyone else across the country offers this as a college or technical school program or private school after high school, which normally costs between $20,000 and $50,000,” Jackson said.

Students work on mock-ups of power systems for airplanes, testing voltage, and troubleshooting problems. They start up propeller engines outside — rain or shine. Students also work on and inspect the frames of planes, some of them decades old.

But the school is also working to keep up with technology and is launching a partnership with Joby Aviation, a company looking to use “electric vertical take-off and landing” aircraft to serve as air taxis.

Students had a chance to see what it’s like to fly one of their aircraft — using simulators and virtual reality headsets.

“It feels like you’re actually in the pilot seat, looking around, you can see the chairs behind you. And then once you actually do take off, you actually feel like you’re flying the plane,” student Sebastian Szczesny said.

Joby plans to help Aviation update its curriculum and prepare students to work on aircrafts, like the ones it developed.

Shriya Shahi, a senior at Aviation, wants to pursue a career in the business-side of aviation.

For her, checking out the simulator was more than just a chance to feel like she was flying.

“For me, like I can just ask questions and hey, like how’d you get to this position? What does the future look like? And so I just gain more wisdom and knowledge and it’ll help me in my career path,” she said.