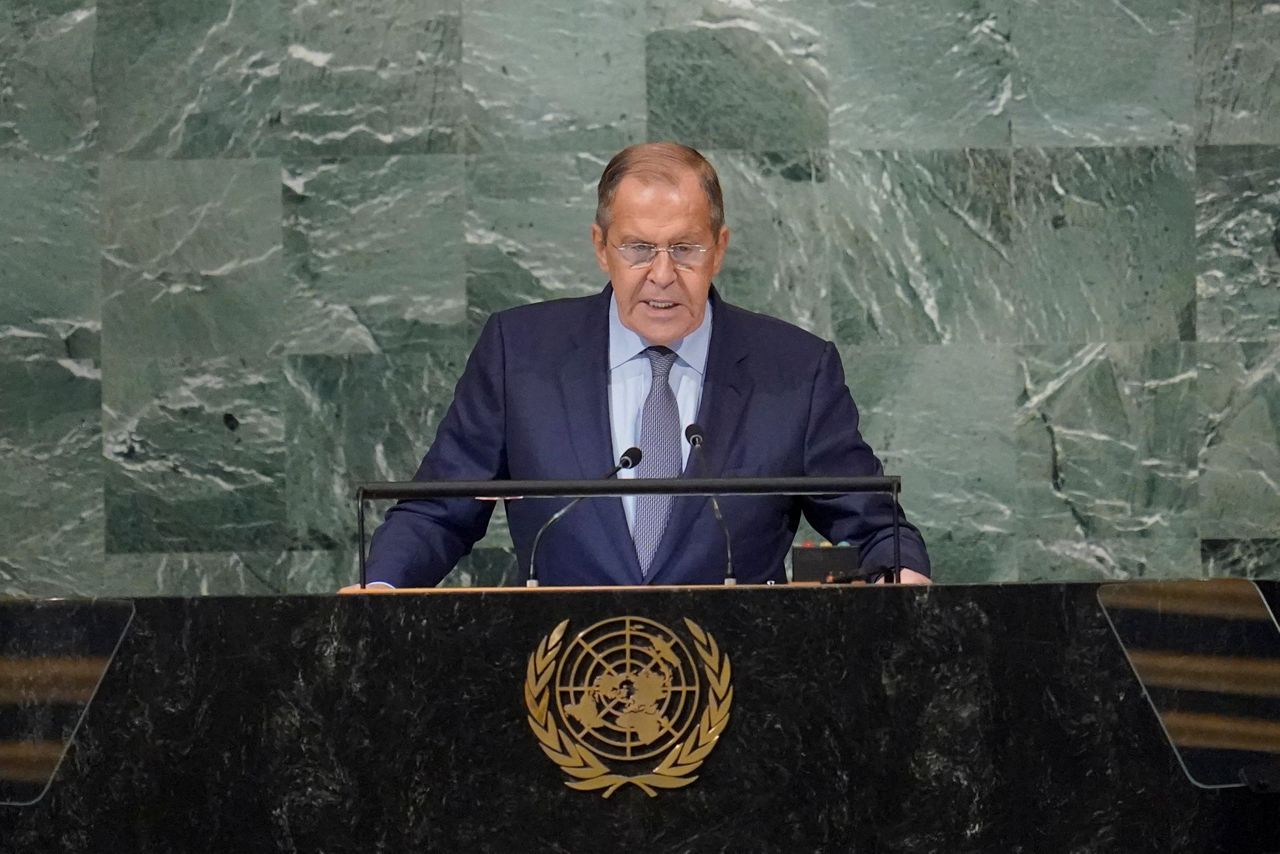 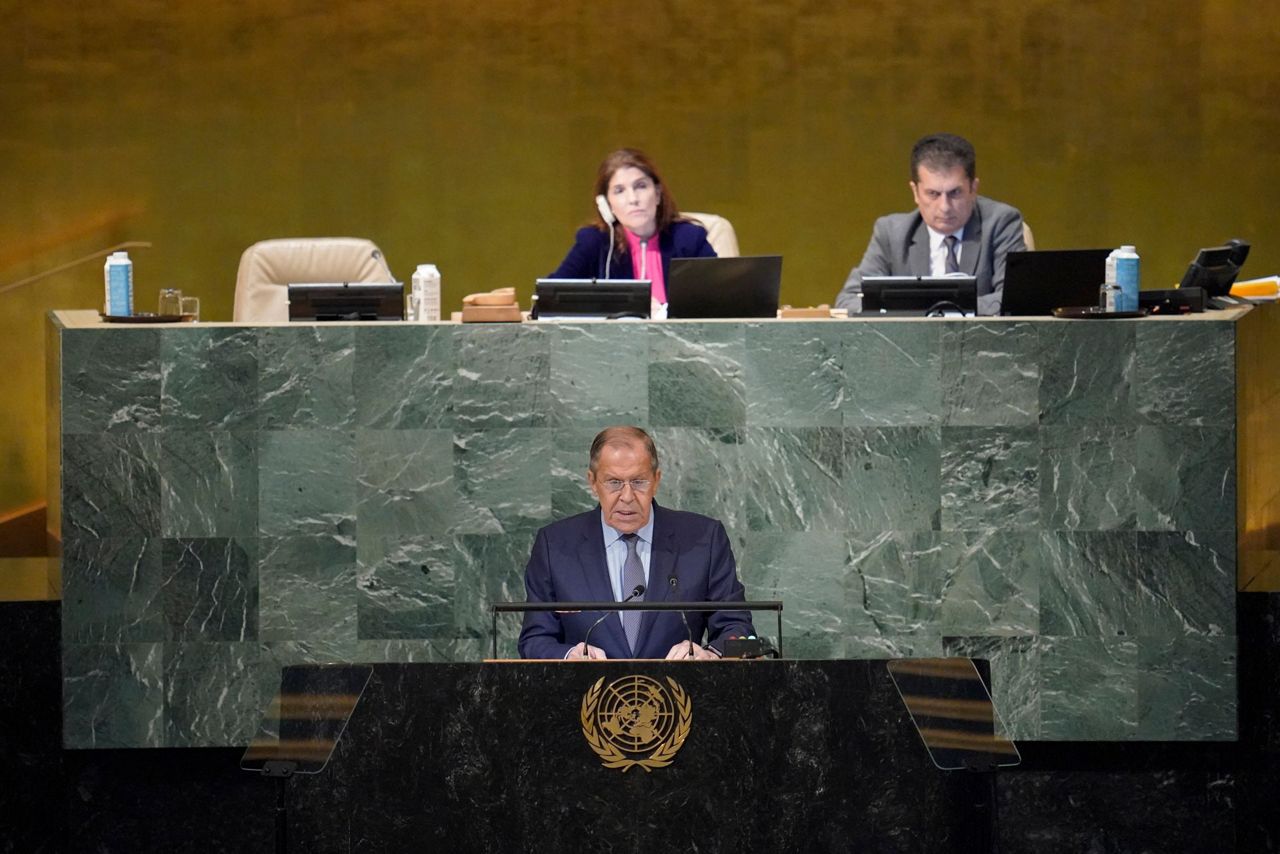 On Ukraine, Russia repeats insistence that it had no choice

UNITED NATIONS (AP) — Russia made its case to the world Saturday for its war in Ukraine, repeating a series of grievances about its neighbor and the West to tell the U.N. General Assembly meeting of leaders that Moscow had “no choice” but to take military action.

After days of denunciations of Russia at the prominent diplomatic gathering, Foreign Minister Sergey Lavrov sought to shift the focus to Washington. His speech centered on a claim that the United States and its allies — not Russia, as the West maintains — are aggressively undermining the international system that the U.N. represents.

Invoking history ranging from the U.S. war in Iraq in the early 2000s to the 20th-century Cold War to a 19th-century U.S. policy that essentially proclaimed American influence over the Western Hemisphere, Lavrov portrayed the U.S. as a bully that tries to afford itself “the sacred right to act with impunity wherever and wherever they want” and can't accept a world where others also advance their national interests.

“The United States and allies want to stop the march of history,” he maintained.

The U.S. and Ukraine didn't retort at the assembly on Saturday but can still offer formal responses later in the meeting. Both countries' presidents have already given their own speeches describing Russia as a dangerous aggressor that must be stopped.

Lavrov, for his part, accused the West of aiming to “destroy and fracture Russia" in order to “remove from the global map a geopolitical entity that has become all too independent.”

The Ukraine war has largely dominated the discussion at the assembly's big annual meeting, and many countries have laid into Russia for its Feb. 24 invasion — denouncing its nuclear threats, alleging it has committed atrocities and war crimes, and lambasting its decision to mobilize call up some of its reserves even as the assembly met.

“Neither partial mobilization, nuclear saber-rattling, nor any other escalation will deter us from supporting Ukraine,” Swedish Foreign Minister Ann Linde declared Saturday.

Russia does have some friends in the sprawling chamber, and one — Belarus — offered a full-throated defense Saturday of its big neighbor. Echoing Russia's talking points, Belarusian Foreign Minister Vladimir Makei said “it was precisely the West that made this conflict inevitable” in Ukraine.

The speeches came amid voting in Russian-occupied parts of eastern and southern Ukraine on whether to join Russia. Moscow characterizes the referendums as self-determination, but Kyiv and its Western allies view them as Kremlin-orchestrated shams with a foregone conclusion.

Some observers think the expected outcome could serve as a pretext for Russian President Vladimir Putin eventually to escalate the war further.

“We can expect President Putin will claim any Ukrainian effort to liberate this land as an attack on so-called ‘Russian territory,’" U.S. Secretary of State Antony Blinken warned the U.N. Security Council on Thursday.

Lavrov dismissed the complaints as the West “throwing a fit” about people making a choice on where they feel they belong.

Russia has offered a number of explanations for what it calls its “special military operation” in Ukraine. Lavrov recapped a couple: risks to Russia from what it considers a hostile government in Kyiv and a NATO alliance that has expanded eastward over the years and relieving Russians living in Ukraine — especially its eastern region of the Donbas — of what Moscow views as the Ukrainian government’s oppression.

“The incapacity of Western countries to negotiate and the continued war by the Kyiv regime against their own people left us with no choice” but to recognize the two regions that make up the Donbas as independent and then to send troops in, Lavrov said.

The aim was “to remove the threats against our security, which NATO has been consistently creating in Ukraine,” he explained.

While Ukraine has recently driven Russian troops from some areas in the northeast, Ukrainian President Volodymyr Zelenskyy earlier this week warned the assembly that he believes Moscow wants to spend the winter getting ready for a new offensive, or at least preparing fortifications while mobilizing more troops.

Regardless, he declared that his forces will ultimately oust Russian troops from all of Ukraine.

“We can do it with the force of arms. But we need time,” said Zelenskyy, the only leader who was allowed to address the assembly by video this year.

The war has disrupted the trade of Ukrainian and Russian grain and Russian fertilizer, touching off a global food crisis. A deal recently brokered by the U.N. and Turkey has helped get Ukrainian grain moving, but fertilizer shipments have proved more difficult.

At a news conference after his speech, Lavrov said he discussed problems with the deal at a meeting this week with U.N. Secretary-General Antonio Guterres.

Although international sanctions against Russia did not target food and fertilizer exports, shipping and insurance companies and banks have been loath to deal with Moscow — and the Kremlin has frequently pointed to that in alleging that Western sanctions have exacerbated the crisis. Lavrov told reporters Saturday that Russia wants fertilizer stuck in European ports to be given to needy countries quickly.

At the Security Council on Thursday, Ukraine and Russia faced off, in a rare moment when Lavrov and his Ukrainian counterpart, Dmytro Kuleba, were in the same room — though they kept their distance.

The General Assembly voted overwhelmingly in March to deplore Russia’s aggression against Ukraine, call for immediate withdrawal of all Russian forces, and urge protection for millions of civilians. The next month, members agreed by a smaller margin to suspend Russia from the U.N. Human Rights Council.