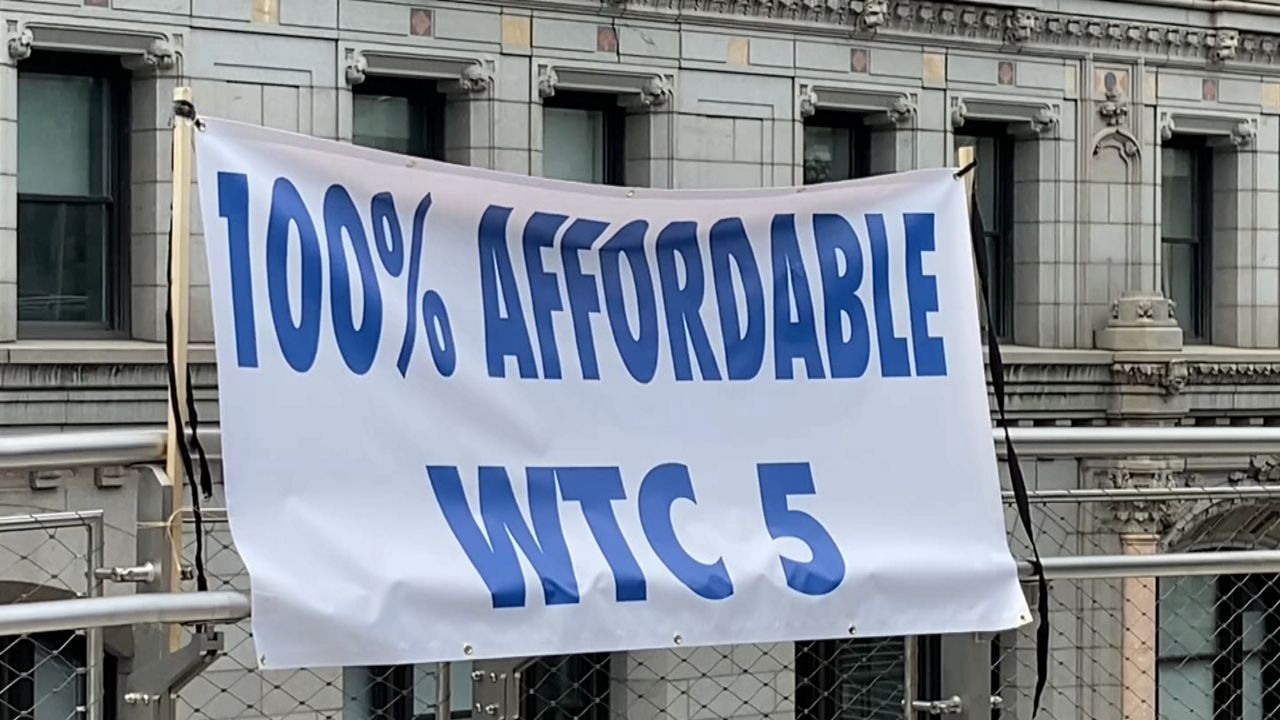 A group of lower Manhattan residents are demanding a 100% affordable housing project at Site 5, billed as the future home of 5 World Trade Center. (NY1/Lori Chung)

A group of lower Manhattan residents are demanding a 100% affordable housing project at Site Five, billed as the future home of 5 World Trade Center.

“We want people to be able to stay in the neighborhood that they built,” said resident Mariama James, a member of Coalition for 100% Affordable 5 WTC. “It’s really disturbing to me to see the lack of diversity, and the fact that it’s increasing."

The coalition is pushing against the current development plan for the site, which was once the former Deutsche Bank building. A proposal calls for a 900-foot mixed-use tower with 1,325 rental units, 25% of them affordable.

Coalition member Jill Goodkind said her late husband had been a longtime champion of affordability at the site. She said 25% is not enough.

“He chaired the Affordable Housing Task Force for Community Board 1, and he put out several reports, all of which included advocating to make this site 100% affordable," Goodkind said. "It’s been needed from the beginning."

The coalition is also proposing that 9/11 first responders and those directly affected by the Sept. 11 attacks be given priority for the units.

“It will be the only building that will have residential units in it, so everything else has commercial space” said Marty Burger, who is CEO of Silverstein Properties and part of the lead development team. He said their proposal was created with affordable housing in mind.

Burger also pointed out that their plan doesn’t call for subsidies.

“We’re asking no dollars from anybody," Burger said. "To add to that affordability, we would have to get more subsidy, and really the state, federal government, local, they’re not handing out dollars."

The coalition says they have a feasibility study that shows that it can be done.

“It could do it without exhausting state subsidy flows, without diverting funding from city public housing," Goodkind said.

Burger said his team will work with advocates as much as possible, as coalition members now try to take their case to Port Authority officials.