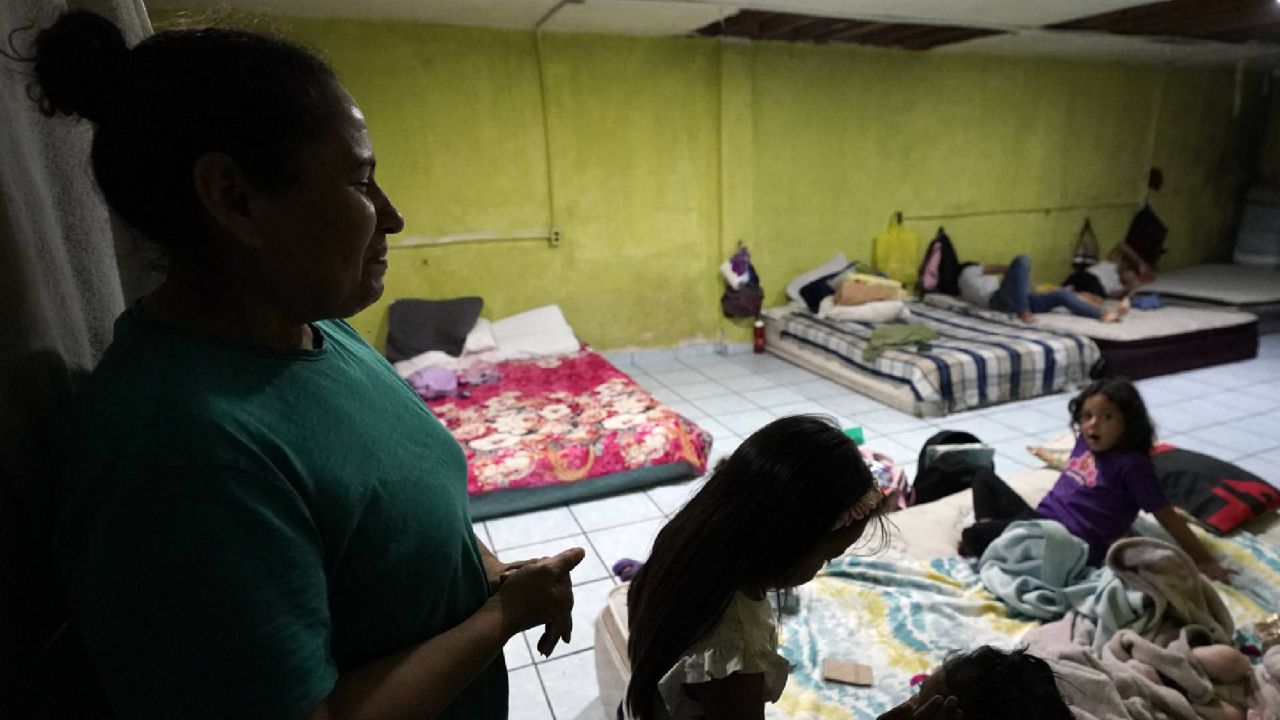 FILE - Iracema Figueroa, left, of Honduras, looks on as her children play with others at a shelter for migrants Friday, May 20, 2022, in Tijuana, Mexico. The Supreme Court has ruled that the Biden administration properly ended a Trump-era policy forcing some U.S. asylum-seekers to wait in Mexico. The justices’ 5-4 decision for the administration came in a case about the “Remain in Mexico” policy under President Donald Trump. (AP Photo/Gregory Bull, File)

The Supreme Court on Thursday ruled in favor of the Biden administration’s decision to wind down the so-called “Remain in Mexico” policy, a Trump-era program that sends some asylum seekers to wait across the border until their immigration hearing.

Justices said the administration has discretion to decide what to do when detention is not an option for all asylum seekers due to lack of space, and officials are not required to send them outside the U.S. as lower couirt decisions indicated.

In a 5-4 ruling, Chief Justice John Roberts wrote for the majority that "the Government's recission" of the policy "did not violate" immigration law, and he said that lower courts who ruled against the Biden administration did not have the power to direct officials which remedies to use when facing high levels of migration at the border.

The case now goes back to the lower courts, but it appears the Biden administration will have the power to end the policy, at least for now.

The controversial program, started under former president Donald Trump in 2019, allowed border officials to send non-Mexican asylum seekers back across the border to await their case, often putting them in danger as many were forced to wait in camps and unsanitary conditions, with limited access to legal representation.

Between 2019 and 2021, the Trump administration sent more than 71,000 migrants to Mexico under the Migrant Protection Protocols (MPP), its official name.

The policy has been called inhumane by immigration advocates. According to the group Human Rights First, migrants experienced more than 1,500 violent incidents during that time while in Mexico, where border towns can be more dangerous, including murder, rape, assault and kidnapping.

President Joe Biden sought to end the policy starting in January of last year, and the Department of Homeland Security issued a memo in June to officially terminate the program.

But after a challenge from Missouri and Texas, a federal judge ruled in August of last year that the Biden administration must continue the policy, leading to diplomatic negotiations with Mexico and a restart of MPP in December of 2021.

“We still feel that the program is inefficient, inhumane, and we … did not eagerly reimplement it,” then-White House press secretary Jen Psaki said at the time.

Immigration advocates on Thursday cheered the decision and urged the Biden administration to move to quickly wind down the policy once again.

"This decision by the Supreme Court paves the way for the Biden administration to finally follow through on its promise to end this cruel and horrific policy once and for all," said Juliana Macedo do Nascimento, deputy director of federal advocacy of United We Dream, in a statement. "People will always move, and it is our responsibility as a country to live up to our values of welcoming immigrants."

Other groups blamed Congress for a lack of immigration reform and options to effectively administer asylum and process the hundreds of thousands of migrants that reach the U.S.-Mexico border each year.

"Border security cannot be achieved until our immigration laws are finally updated to meet the needs of this century," said Texas Border Coalition Chairman Eddie Treviño, Jr. in a statement.

That idea was echoed By Justice Kavanaugh on Thursday in separate opinion agreeing with the majority. He sharply criticized the lack of immigration resources provided to border agencies.

"The larger policy story behind this case is the multi-decade inability of the political branches to provide DHS with sufficient facilities to detain noncitizens who seek to enter the United States pending their immigration proceedings," he wrote.

"But this Court has authority to address only the legal issues before us. We do not have authority to end the legislative stalemate or to resolve the underlying policy problems," he added.

More than 5,000 migrants have been returned to Mexico since the program’s restart under Biden, according to data gathered by Syracuse University’s TRAC database, indicating it has been applied on a smaller scale than under Trump.

Few migrants enrolled in the Remain in Mexico program have been able to acquire legal counsel or successfully obtain asylum, data from the TRAC database shows. Less than 8% of the migrants sent to Mexico under President Trump had legal help, which greatly helps one’s immigration case. Less than 1% of those 71,000 migrants were granted asylum.

In a dissenting opinon, Justice Alito wrote that the Biden administration is violating the law in deciding to release migrants into the country on parole instead of using its option to return them to Mexico when detention is not possible.

"The District Court should assess, among other things, whether it is 'arbitrary and capricious' for DHS to refuse to use its contiguous-territory return authority," he wrote, and "whether DHS’s rescission of MPP is causing it to make parole decisions on an unlawful categorical basis rather than case-by-case, as the statute prescribes."

Tom Homan, a former acting director of Immigration and Customs Enforcement (ICE) under Trump, said that "Remain in Mexico" policy "helped create the most secure border in our lifetimes. He also praised the current pandemic-related Title 42 restriction at the border that allows many people who cross to be immediately expelled, a policy also put in place by the former president.

"Policies like Remain in Mexico and Title 42 are the last seawalls holding back a crushing tidal wave," Homan wrote.

But in line with Justice Kavanaugh and other immigration advocacy groups, Homan also called for reform: "Now, it’s up to Congress to do its part to secure our borders, fix the Biden border crisis, and reduce illegal immigration."