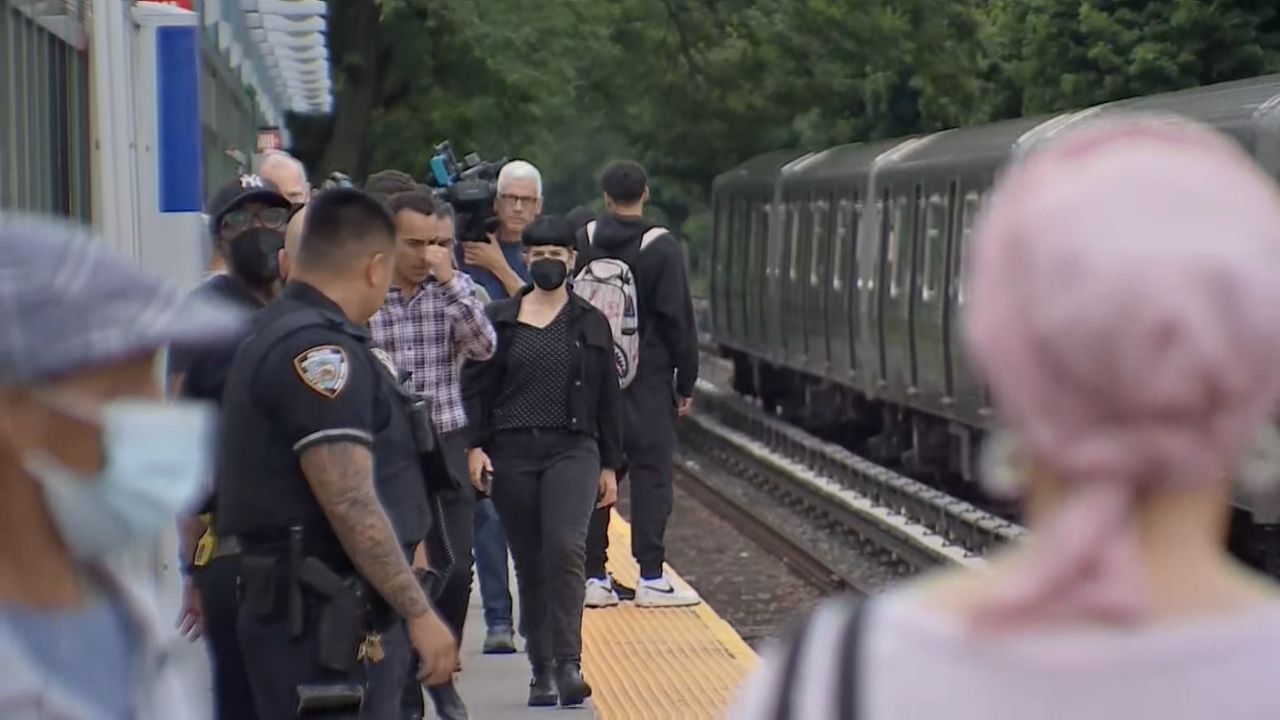 Straphangers wait for a Brooklyn Q train where late Wednesday night a Brooklyn man died after falling between the train and the subway platform and then onto the tracks. (Spectrum News NY1)

A man who was dragged along a Brooklyn subway platform Wednesday and then onto the tracks where he was hit by another train has died, MTA officials say.

The man, identified by police as 37-year-old Marcus Bryant, of Brooklyn, was exiting a northbound Q train at the Avenue M station in Midwood around 11:50 p.m. when he became stuck between the train and the subway platform, Richard Davey, president of New York City Transit, said during a news conference Thursday afternoon.

The NYPD initially said an article of Bryant’s clothing may have been stuck in the train’s door as it pulled away, causing him to be dragged along the platform and then onto the tracks.

But during the news conference, Davey said that officials believe Bryant’s clothing was not stuck in the closing train door.

“What we know is that the individual was caught between the train and platform, and later fell into the pit, into the tracks, and a second train later came over him,” Davey said, adding, “We believe this is not a door issue.”

Officials are still investigating Bryant’s exact cause of death.

An Eyewitness To The Travesty

A witness to the grisly train accident, Yau Kin Lau was on his way home from work as a restaurant server when he stepped off the northbound Q train late Wednesday night ahead of Bryant.

Lau heard the cries of help from him.

“He said, 'Help, stop the train,’ and I saw it immediately,” Lau said. “I’m yelling to stop the train. Unfortunately there’s no one beside me at the platform.”

The conductor was apparently unaware a man’s life was at risk.

“He goes very fast, a split second, no one realized and he just been dragged for probably 30 feet, 40 feet and just dropped to the middle of the track,” Lau said.

Lau dialed 911, ran downstairs from the elevated station to reach a booth agent to stop the next train, but there was no time.

“I ran back upstairs, told the second train operator and said, ‘Man under the track right now. You might hit them again,’ so they immediately stop the train,” Lau said.

A second Q train coming into the station ran over Bryant.

Even though Lau tried to get help, he says he wishes he could have saved him.

Davey at the news conference described the protocol for trains leaving the station.

“A conductor should have his or her head out the window when the doors closed and be looking to the left and to the right for approximately 75 feet, that’s our normal protocol,” Davey said.

It wasn’t immediately clear how long Bryant was on the tracks before the second train hit him or what injuries he sustained.

He was taken to Maimonides Medical Center, where he was pronounced dead around 1 a.m. on Thursday, the NYPD said.

Q train service, which was temporarily disrupted after the incident, resumed around 3:20 a.m. on Thursday, the MTA said.