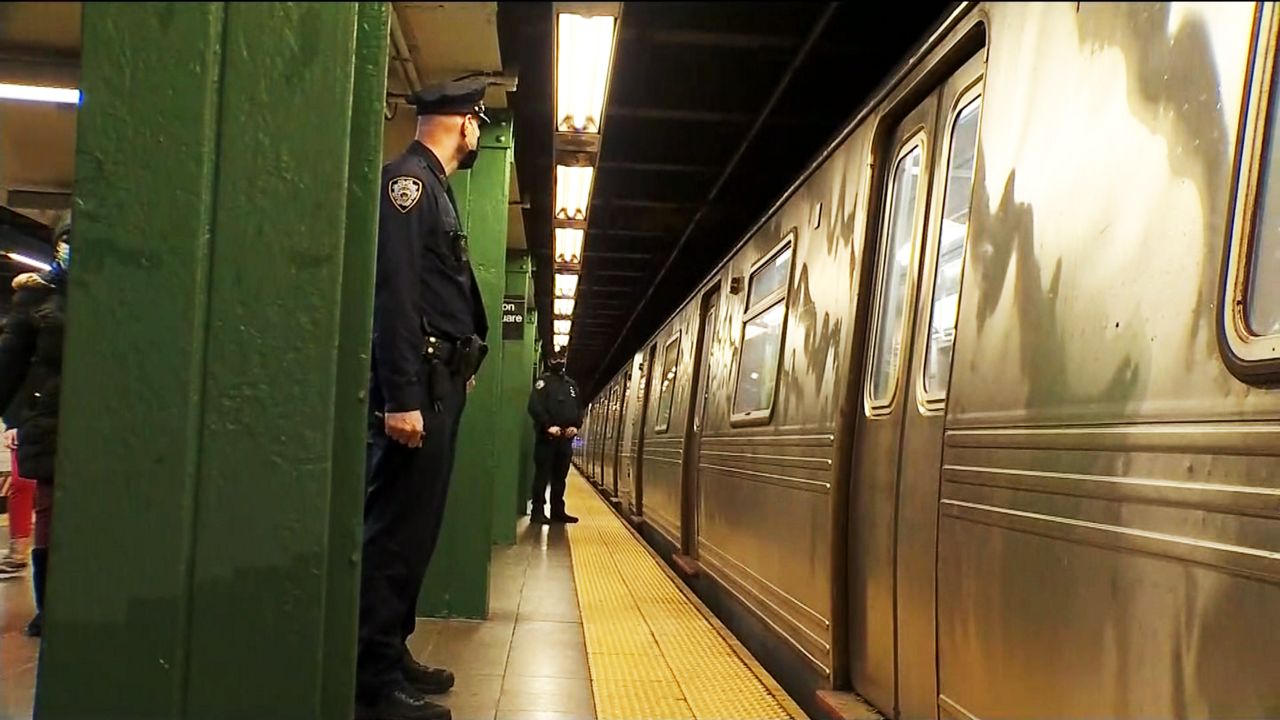 NYPD officers patrol a subway platform as calls for more safety measures grow in the wake of recent attacks on riders and transit workers.

Calls for more safety in NYC's transit system are growing. Here's why.

NEW YORK — Leaders from the Metropolitan Transportation Authority and Transport Workers Union joined together this week to ask the city for additional police presence to protect commuters and workers alike.

“As a rider and a female rider I do want, I prefer to have more police presence on the train," said Stephanie Brown, a subway rider told NY1 outside the Broad Street subway station in Lower Manhattan.

The station is where, just a few days ago, someone pushed themselves into a train operator’s cabin and locked the door. It’s just one example of why some transit officials want more of a police presence on the subways.

"I think it would be great if there’s more security there people deserve the best they’re paying a lot for the tickets so it includes security,” Kahn said.

In a rare joint press conference Thursday, the MTA and the TWU demanded more police and mental health assistance underground. They spoke outside Jamaica Hospital where a 52-year-old train conductor is recovering after the NYPD said someone slashed him in the face with a box cutter on the J train by Brooklyn’s Crescent Street Station.

However, according to NYPD stats, overall crime in the subway system is down 10% compared to this time last year.

The definition of uniform presence - standing tall & ever-watchful. Riders have seen & will continue to see teams of sworn & volunteer officers deployed throughout the subway system. pic.twitter.com/VnQB8LwF9w

"Of course the system is safe for the vast majority of people who are using the system" said NYC Transit president Sarah Feinberg. "But it is not currently safe for all of our transit workers and it's not as safe as it could be. And it's not safe enough to convince all of the New Yorkers that we need to come back to the system that it's a safe place to be."

In response, city officials said, “The MTA isn’t just fearmongering anymore; they’re actively lying to New Yorkers about public safety. The transit force is thousands strong – hundreds of additional officers have surged to the areas that need it most."

On Friday morning, in response to the city’s accusation of lying, the MTA said, "The NYPD released a statement confirming the mayor misspoke when he suggested additional officers that were surged into the subway system following fatal stabbings in February had been taken out. We appreciate the NYPD's clarification that those officers remain every day -- and would like to know the actual number of officers patrolling the system on a regular basis."