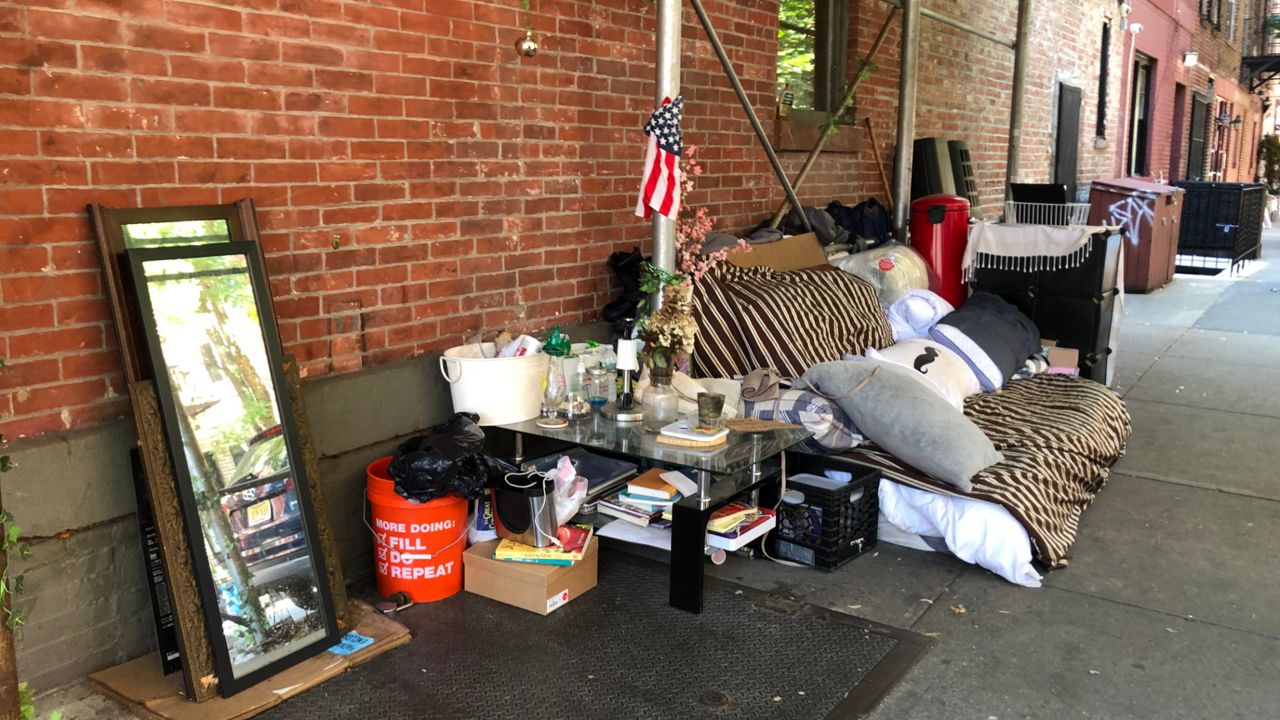 Toni Hayes and her family set up camp in the shadow of Penn Station along one of the busiest streets in Manhattan.

“We move from this spot to back in front of the post office. Back and forth,” Hayes told us last week.

She sleeps on Eighth Avenue in Manhattan most nights with her husband and nephews.

They have set up suitcases and chairs. They had a tent.


"The cops, they move us back and forth,” Hayes said. "The cops move us around a lot, because there is nowhere to sit really.”

They’ve been living on the street like this for about a year. September 16 will make it official.

“Right now it’s hard to get something on our own, because the rent is so expensive,” she told us last week.

When we visited them, this family’s setup took up a stretch of sidewalk in one of the busiest places in the city. At least when we visited, the NYPD left them alone.

Thousands of New Yorkers sleep on the street every night. But since COVID-19 struck the city, anecdotally New Yorkers are saying more homeless people are taking up those streets, setting up makeshift tents or structures to shelter from the heat or rain.

Ladiee Warner and her husband stay in Midtown near 10th Avenue. They have a mattress and tarps to keep out the rain on a secluded block near the Javits Center. They were there during this week’s tropical storm.

She said she was still recovering from it.

Even under those conditions, she is not interested in going back to a shelter.

“The shelters I have been in, they are nasty, the staff is rude,” Warner said. “People are fighting. People getting stabbed. It's dangerous things going on they don’t take serious. It’s safer on the streets than inside of there.” The Department of Homeless Services would not say whether encampments are increasing.

But we know complaints to 311 definitely are — dramatically.

That’s an increase of about 232 percent.

Not all of those complaints are necessarily for different sites. Some neighborhoods could call more than others.

Take the last year. Typically, a couple dozen of these so-called sweeps would be done in a month. In August of 2019, there were 54. That number skyrocketed earlier this year, when the NYPD and homeless services were coordinating on outreach to homeless people living on the street. In April, there were 137 done. That number dramatically fell off in June. Just one encampment was cleaned up the whole month.

NY1 has learned that since June the NYPD is no longer a routine part of these operations.

So while complaints about homelessness have gone up, the number of encampments cleaned up has fallen.

“When we see them, we stop them, and sometimes it does take a couple of days, but we've managed to do it successfully with very little reoccurrence,” Mayor de Blasio said on July 23. "Anyone who tells us about an encampment, we're going to have it addressed right away by Homeless Services, Sanitation, PD, whatever it takes.”

Hayes at Penn Station sees it this way: “They want to call this an encampment they can call it that, but this is what you call having a family together and keeping them together."

Some who live on the street did not want to go on camera, but they told us, these cleanups mean their belongings are tossed in the trash.

They gave us video of a cleanup in Harlem last week. It shows sanitation workers taking someone’s walker and throwing it in the trash. The city denies it wholesale throws out peoples’ belongings. It posts a notice giving people an advance warning that the cleanup is coming. Officials say valuable property is respected. A spokesperson said outreach teams are there during the process to try to convince them to go to a shelter.

Earlier this week, Hayes and her family had all of their stuff on the street.

For now, they don't appear to be moving.