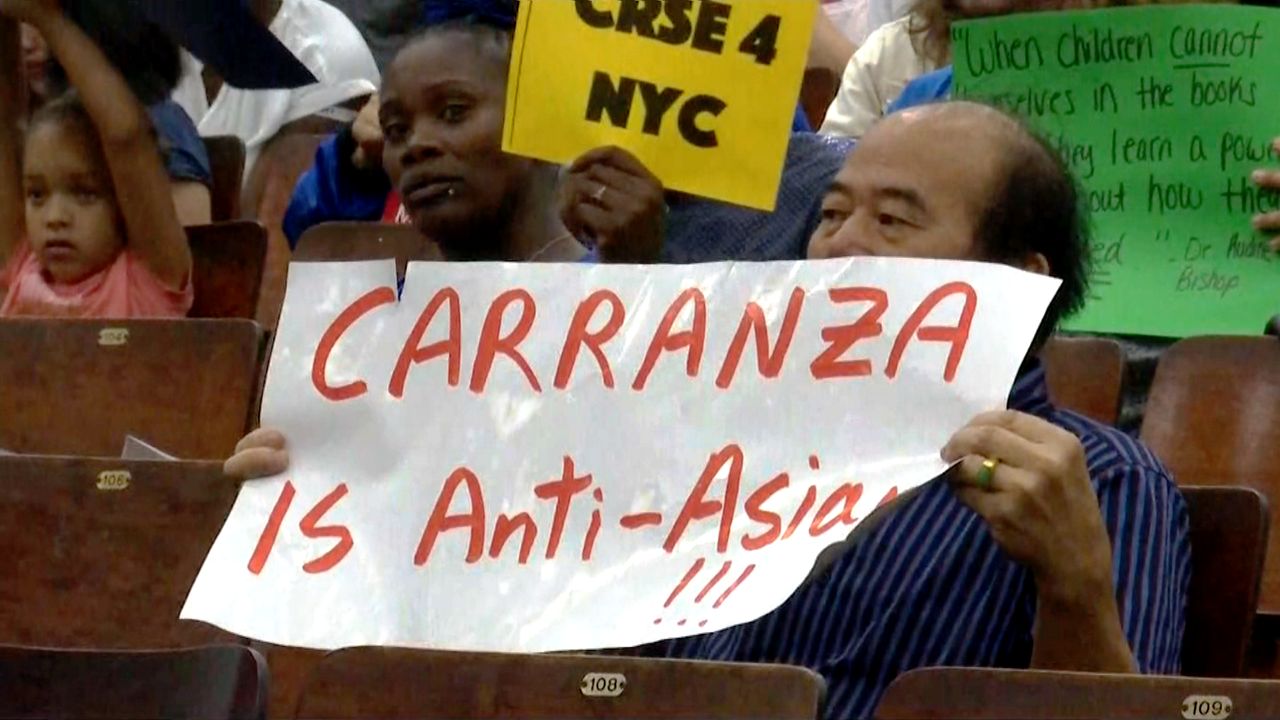 NEW YORK - It was supposed to be a vote on city schools becoming more sensitive to other cultures. Instead, it devolved into protest — when the city failed to provide Mandarin and Cantonese translators at a meeting held in a Chinatown school.

“They do not have an interpreter. And the chancellor happened to welcome people in Spanish in the heart of Chinatown where the majority of the attendees are Chinese. How ironic. How diversified that his view point is," said Linda Lam, a parent.

Many Asian American parents and activists in the crowd came dressed in shirts or bearing signs calling for Schools Chancellor Richard Carranza to be fired — and chanted that he was anti-Asian and racist.

It’s a campaign that began when Carranza backed repealing the Specialized High Schools Admissions Tests in an effort to diversify the elite public schools — which are overwhelmingly Asian. The lack of translators inflamed those tensions, which carried over even after translators arrived and Carranza apologized for the delay.

"I want to ensure the public that we always want to have the right interpreters at our meeting. Let me be really clear — this is a school, there are students present, we will behave ourselves in an orderly manner," Carranza said.

The drama delayed a vote on adopting what’s called a Culturally Responsive and Sustaining Education curriculum — aimed at teaching students about their own culture.

“Our curriculum should reflect the diversity of our students. It is not acceptable that my son is in seventh grade and he has not read a book about himself to his culture that he can identify with," said Tanesha Grant, a parent.

At times, supporters of the new curriculum tried to drown out Asian-American protesters with chants of their own. But some supporters noted the groups ought to be on the same side.

"We want everyone to be included we want to include everyone we want everyone to have a seat at the table and that’s our fight. And they can’t be against that right? We’re sitting here now waiting for the translator for them. And that’s what we fight for," said Rasheedah Harris, a parent.

Despite the disruption, the new curriculum was voted on and adopted at the meeting in a unanimous vote.