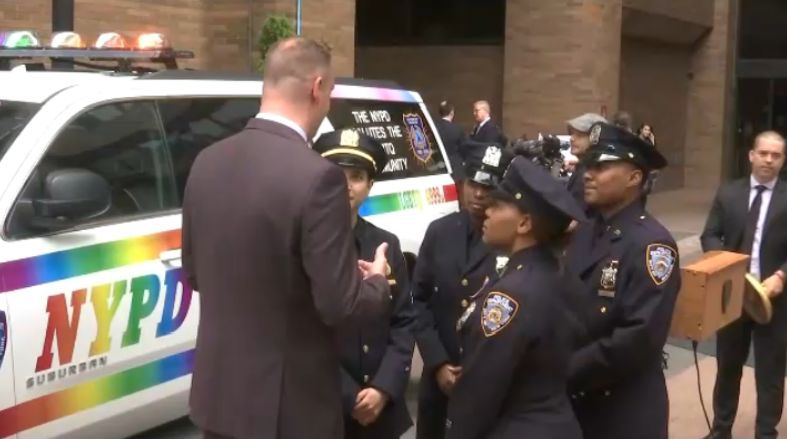 The event will begin at noon on Sunday.

Unlike in years past, the march will start at 16th Street and head south down Seventh Avenue before turning east on Christopher and West 8th streets.

The Fifth Avenue portion of the parade will be northbound through the ending at 29th Street.

Did you know that this year’s @NYCPride Parade on Sunday has a new route? Be informed and check out this graphic. #NYCPride2018 pic.twitter.com/456Zi1btFd

The NYPD says the route change was a result of collaboration between march organizers and the department, in part due to expected historic attendance for WorldPride being held in New York City next year which also coincides with the 50th Anniversary of the Stonewall Uprising.

“As we always do for events of this size, we have a comprehensive security plan in place to ensure the safety of everyone participating in or attending the march.”- @NYPDChiefPatrol on how this year’s @NYCPride Parade will be both safe and fun. #NYCPride2018 pic.twitter.com/r0FeuqkqeU

The NYPD says while there are no credible threats against the parade, they are deploying a large number of uniformed and plainclothes officers to ensure the event is safe.

"We have to be mindful of the rhetoric that's been out there, the rhetoric that is part of the doctrine of certain terror groups including ISIS and al Qaeda against the LGBTQ community. We have to be mindful of history, the Pulse nightclub shooting where groups and places have been singled out for acts of violence," said NYPD Deputy Commissioner of Intelligence and Counterterrorism John Miller.

The event will feature 50,000 participants and 600 volunteers.

Police encourage anyone who may see something that appears to be suspicious to find a police officer, call 911, or call the terrorism tip line at 1-888-NYC-SAFE.