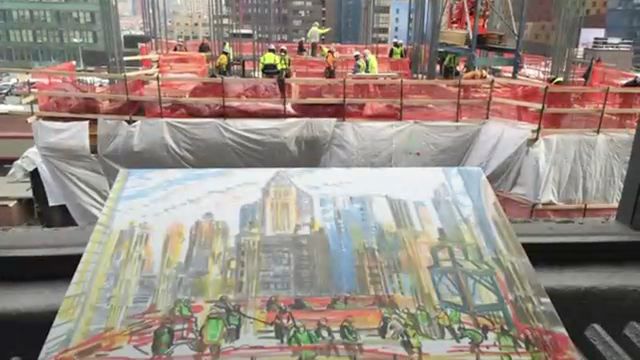 As buildings around the city get taller and taller, they block the views that many New Yorkers hold so dear. And the loss of those views can be devastating for artists who rely on them for inspiration. But as NY1's Kristen Shaughnessy tells us, one artist in Midtown is turning her experience into something positive.

The view from Gwyneth Leech's midtown painting studio was her inspiration — the shapes, the changing light, the shadows — she captured it all on more than a thousand plain coffee cups she transformed into cityscapes and scenes.

Then she realized that view soon might be gone.

Down below construction had started on what would be a very tall building.

"My first reaction was 'I have to move, I can't bear to lose this view, it's going to be constant disruption and noise for years. I'm not going to renew my lease.'"

Instead of moving, Gwyneth began painting what was happening below stroke after stroke, floor after floor.

"I thought this actually could be really interesting, I don't think I can escape it anywhere I go, it's happening everywhere, I'm just going to stay and record the whole thing," she said.

"We certainly had a moment on a snowy day, I was looking out the window, they were on the 13th floor right across, in a blizzard trying to batten down their hatches and they turned around and they saw me and I saw them and we were like waving to each other."

At the same time the building went up Gwyneth was dealing with a series of losses — her mother, her father and her sister.

The view, her family members, all things she loved dearly and was losing forever — and the painting became cathartic.

"I came to think of this building out my window as a monolith, it had this slab-like quality as it went up and this immovability — so it began to represent other monolithic things in my life that I couldn't change specifically the deaths of my father, my mother and my sister. It became a metaphor for things we couldn't change, but had to learn to live with and to work around in some way."

Director Angelo Guglieomo documented Gwyneth's journey in a short film appropriately named The Monolith. It has more than 150,000 views on Vimeo which named it its "Short of the Week."

Nineteen of Leech's construction paintings are now on display at the Kaufman Arcade at 139 West 35th Street through March 31.