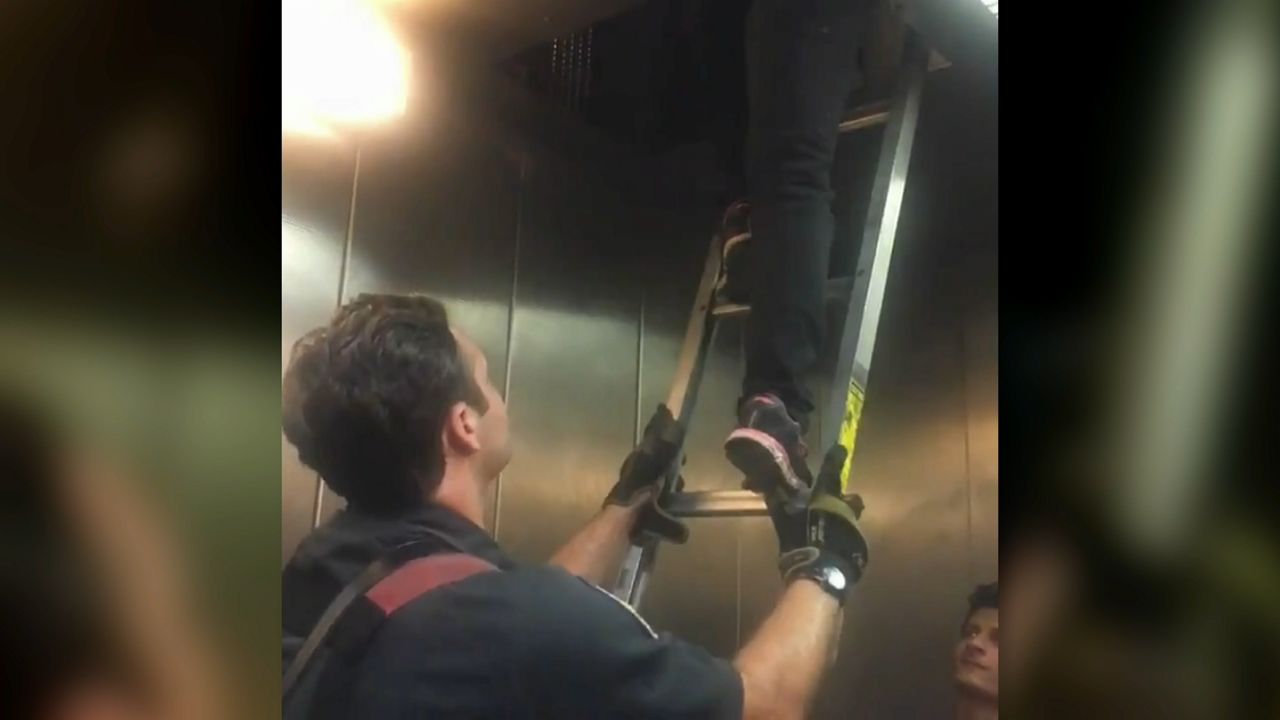 A firefighter holds a rescue ladder as a person climbs up the stairs to escape an elevator. Riders at Brooklyn's Clark Street station on the 2/3 line were trapped inside the hot, cramped elevator for close to an hour before firefighters pulled off a complicated rescue. Photo courtesy of taliakovacs/Twitter.

To use Brooklyn's Clark Street station on the 2/3 line, subway riders have to take the elevators — elevators that have a notorious reputation.

"They are a major problem," one subway rider said. "Very often, you only have one running, sometimes two."

Elevator Number 312 was at it again Monday morning, trapping more than a dozen straphangers for close to an hour.

"We're on our way up and then we realize that the elevator wasn't quite moving," Talia Kovacs said. "So we made sure we pushed the button, we're all kind of looking around at each other. We realized we were stuck."

Kovacs broadcast the misery on social media, tweeting to the MTA, "No door. Can't get out. It's hot," as she and fellow straphangers waited for help.

"We were just sitting in the hot, sweaty elevator," Kovacs recalled. "People were crying, men and women were crying, there was an elderly person who felt really faint."

Firefighters finally arrived, lowering a ladder from the elevator shaft into the cab.

More than a dozen people were stuck inside this hot, cramped elevator at #Brooklyn's Clark Street station for close to an hour Monday. They finally got relief when firefighters pulled off a complicated rescue. Video courtesy of @taliakovacs. https://t.co/yF86k8aUtl pic.twitter.com/IJPBvXAjPF

But the evacuation was not so simple.
"Once you got to the top of the elevator, you had to climb over these two big rungs," Kovacs said. "They put a belt on us because it was a little dangerous, and then we had to climb up another ladder. And then from that second ladder, we had to take a lot of stairs."

To get up and out and, finally, to work.

"This was really bad. It was too long, too hot," Kovacs said.

The elevators at the Clark Street stop have, in recent months, been a persistent problem for the MTA. At times, trains have had to bypass the station because of issues with the elevators.

According to MTA records, Elevator 312 broke down 15 times in the second quarter of the year — the fourth least-reliable of Brooklyn's 54 elevators subway elevators. Since then, the MTA says it's been in service nearly 99 percent of the time. The elevator is supposed to be replaced under the MTA's current five-year Capital Improvement Plan.

Main story image above: A firefighter holds a rescue ladder as a person climbs up the stairs to escape the elevator. Photo courtesy of taliakovacs/Twitter.