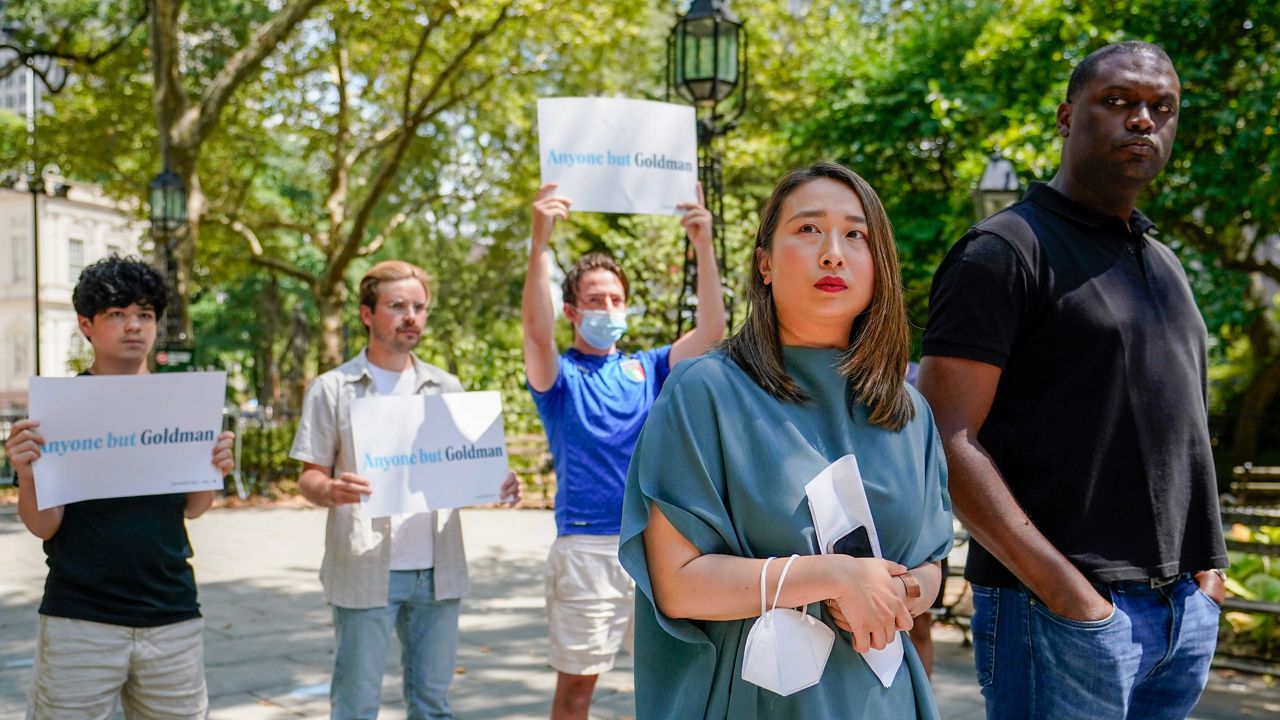 It’s an unusual scene with a week left in the campaign.

Rep. Mondaire Jones and Assembly member Yuh-Line Niou came together on Monday to denounce one of their opponents in the race for New York’s 10th Congressional District.

“Conservative Democrat Dan Goldman cannot be allowed to purchase this congressional seat, certainly not in one of the most progressive districts in the country,” said Jones.

The Assembly member doubled down.

“We can’t let a candidate so out of step with this district’s values buy themselves a congressional seat,” she said.

They were attacking former federal prosecutor Dan Goldman — who just won the endorsement of the New York Times and leads the race according to a poll from PIX 11/The Hill/Emerson Polling released Monday that put him ahead by five points.

Niou was second with 17%

“I think what the voters recognize is that my progressive ideals are aligned very much with theirs,” Goldman said on Monday.

Both Jones and Niou slammed Goldman for using his personal wealth to fund his campaign — Goldman has sunk $4 million into the campaign.

They say he’s not progressive enough for this left leaning district.

“Our multi-million opponent didn’t need to know or care about abortion before he ran for congress,” Niou said.

“No wonder Mr. Goldman opposes Medicare for all,” said Jones. “He is invested in pharmaceutical companies.”

.@yuhline and @MondaireJones both arguing @danielsgoldman is a “conservative Democrat” who doesn’t fit the ideals of the district. @yuhline adds: “We’re standing with the people, and it’s disappointing more candidates in this race can’t make that commitment.” pic.twitter.com/OlMBNl8yxW

“I don’t know what they said about me but I can assure all of the voters of this district that I will be a vigorous advocate for expanding healthcare to every American,” Goldman said.

Goldman says he supports the principles of the Green New Deal. He also supports an expanded public option for health care, but was reluctant to say that specifically on Monday.

When asked by NY1 if he supports Medicare for All and to clarify his position on abortion, Goldman responded: “I mean all of this stuff has been on our website for weeks and months now. I believe that health care is a fundamental right and every American should have health care.”

He later said he supports health care for everyone, but he believes the most realistic way to get more people covered is through an expansion of the current system.

We asked a third time for clarity on his position on Medicare for all. He says he supports “healthcare for everyone.” pic.twitter.com/ia9IYhLYsi