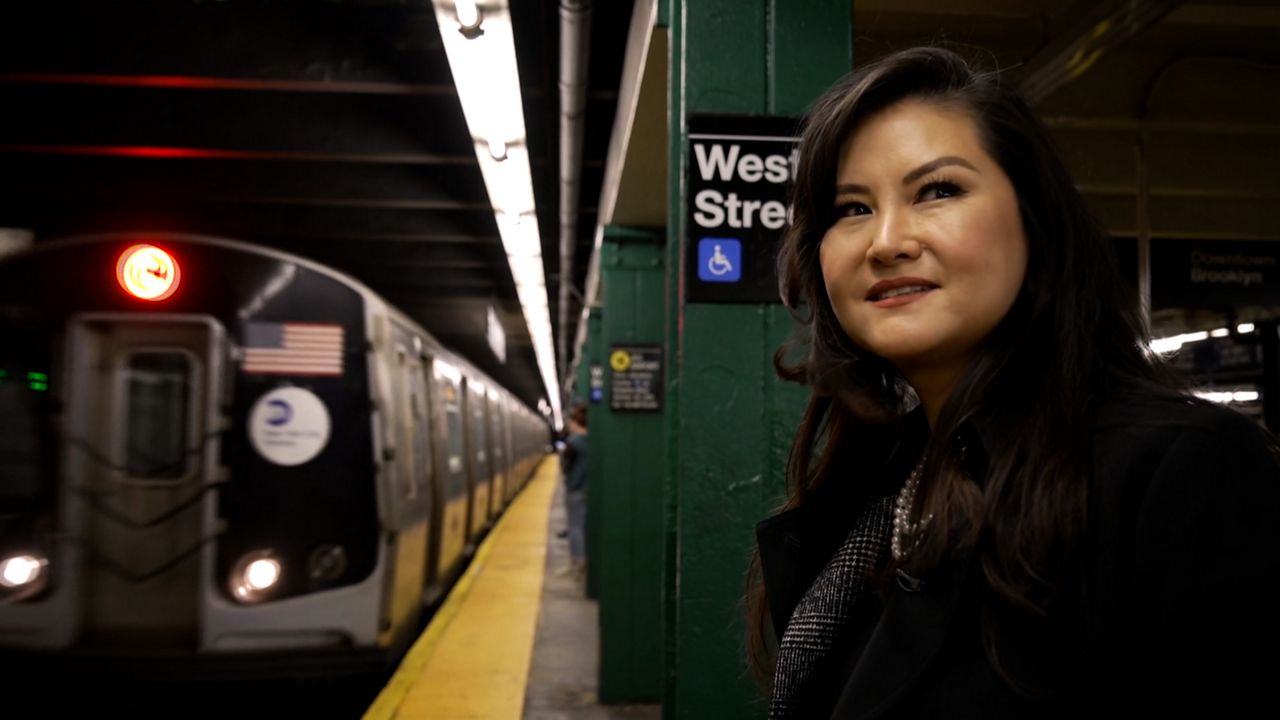 Esther Lee said she's accepted her new role as an "accidental activist" since the incident on the subway last October. (Kristi Lee Neuberger/NY1)

Esther Lee said she was in a hurry when she boarded an uptown A train in the West Village last October on her way home to make a Zoom work meeting.

Minutes later, her day was derailed — and her life set on a different course — when she said a man verbally assaulted and spit on her after she rebuked several attempts he made to engage with her.

“I just remember looking at him and saying, ‘I really don't wanna engage with you. I'm not trying to be rude. I just want to be left alone,’” Lee said. “And that was when he started getting very, very angry, very rude.”

The ensuing incident has since turned Lee into an “accidental activist,” as she says she’s been called by friends. The traumatic assault, and her interactions that followed with NYPD, is something she said she doesn’t want anyone else to have to go through.

She credits her connections to city leaders and outspokenness in being able to create waves with her case, which did eventually get the attention of Mayor Eric Adams. But she’s aware that not everyone has that capacity.

“How many more women are out there that don't have the kind of access that I have?” she said.

That day on the subway, she stood up and walked away from the man as his behavior started escalating. But he got up and kept yelling in her face, she said.

He called Lee a "carrier," a slur presumably associating her Asian ethnicity with the COVID-19 virus, before spitting on her more than once, she said.

No one stepped in to intervene, and she had nowhere else to go on the moving train, she said. It’s why she took out her phone and started recording the interaction.

She got off at the next stop and headed straight to the nearby police station. She said she was still in a state of shock over what happened.

“Whatever this was — this exchange — that was not OK,” she said. “It was a violation of my space. It was an aggressive exchange, and it was just not OK.”

But her experience reporting the incident to the NYPD only added to her trauma, she said.

Lee believes her case was not taken seriously at first since the man only used the term “carrier” instead of other more recognizable racist slurs.

“But he called me a carrier,” Lee said. “We're in the middle of a pandemic where we had the previous president of this country refer to this virus as the China flu, the kung flu, blaming it on China, blaming it on Asian people and therefore causing this incredible, ridiculous wave of Asian hate.”

Lee went all the way to the top, connecting with, at the time, the head of the hate crimes unit, Jessica Corey, but said she still had no success moving her case along.

She said they kept telling her that it wasn’t a hate crime.

“That really was upsetting to me,” she said. “And, of course, it re-traumatizes you. It truly does.  It's bad enough that something like this happened to you. It’s worse when you realize that the agency that is supposed to be there to protect and serve you is not doing that.”

After months of little progress, Lee went public with her story, turning to the media.

It got the attention of Mayor Eric Adams who ultimately reassigned Corey, calling it “routine shuffling,” but later expressed his dissatisfaction with the unit.

The NYPD maintains that staff changes, including the reassignment of Corey, were not related to Lee’s case and not disciplinary in nature, according to a spokesperson.

“I thought we were too slow in designating, investigating something as a potential hate crime, and I wanted to make sure someone was in charge of the unit who understood my vision,” said Adams at a Feb. 28 news conference.

On March 25, the suspect, Michael Aldridge, 63, who lives in the Bronx, was arrested. Though the NYPD said Lee’s case was investigated by the Hate Crimes Task Force, Aldridge was only charged with menacing, harassment and violation of a public health law.

“A conferral was made with the NYPD’s Legal Bureau as well as the Manhattan District Attorney’s Office and a legal determination was made that the facts of the case did not meet current hate crime statutes,” an NYPD spokesman told NY1.

In New York state, the hate crime statute requires that bias be the substantial or the whole part of a perpetrator’s motivation for the crime. But to prove that, it requires investigators to get inside a suspect’s mind, according to experts.

“It’s hard to prove why anyone hates someone else in the same way that it's hard to explain why anyone loves someone else,” said Jennifer Wu, a partner at Paul Weiss, a law firm that represents recent victims of anti-Asian attacks.

It’s why victims’ advocates argue that the current hate crime statute should be updated.

“I think the problem with hate crimes is that we focus on the word hate,” Wu said. “Does the defendant have hate when they commit the crime? In reality, what we're talking about is — did the victim feel unsafe and did this crime make the entire community feel unsafe?”

Shifting the focus to the safety of an impacted community is one way to evolve the hate crime statute to have a bigger impact, she said.

Attacks against Asians have increased dramatically over the course of the pandemic. NYPD statistics show that in 2021, anti-Asian incidents increased by 343%. There were 133 attacks compared with 30 in the previous year. Through April 3 this year, there have been 32 anti-Asian hate crimes. There was just one confirmed anti-Asian incident in 2019.

Though Lee says she is grateful that the incident did not escalate to a physical attack, the trauma of the incident and the way it played out reporting to NYPD continue to impact her.

“The way that that stress manifests is uncontrolled crying for no reason, incredible moments of sadness,” she said.

Lee hopes that by sharing her story, others will have an easier experience reporting similar incidents.

On the one-year anniversary in March of the Atlanta massacre that killed eight people, six of whom were Asian women, Lee took to the podium in Times Square at a rally against anti-Asian violence to share her story.

“What's disturbing about my situation is that the higher up I went on the NYPD chain of command, the worse it got,” she said at the podium. “The victim blaming, the lack of bias training and their immediate dismissal of a situation that should have been properly investigated shook me to my core. If they were doing this to me how many women were being dismissed on a day-to-day basis?”

Though Aldridge has been arrested, Lee said she is not focused on punitive justice.

She said she's accepted her new role as an “accidental activist” since this incident, including speaking at the Times Square rally and co-hosting a self-defense course with Prepare Inc, an organization providing violence prevention programs, in May.

She wants to continue pressuring the NYPD to conduct implicit bias training as well.

“I would be 100% behind that,” she said in a text message. “If the mayor and commissioner instituted it, I would be very supportive of it. Hell, I’d talk to cops in a heartbeat if they needed me to.”

Her goal is to keep attention on anti-Asian hate crime instead of waiting until tragedies like the deaths of Michelle Go, who was pushed onto a subway track, and Christina Yuna Lee, who was stabbed repeatedly in her Chinatown apartment, both of which happened earlier this year.

“I consider myself a fighter and there is great empowerment in that,” Lee said. “To be able to sit with you and give voice to this, to be able to give it a face? I am not an activist. I am just a regular New Yorker who got thrown in this situation, and I’m trying to do the best not just for myself but for other people that look like me.”