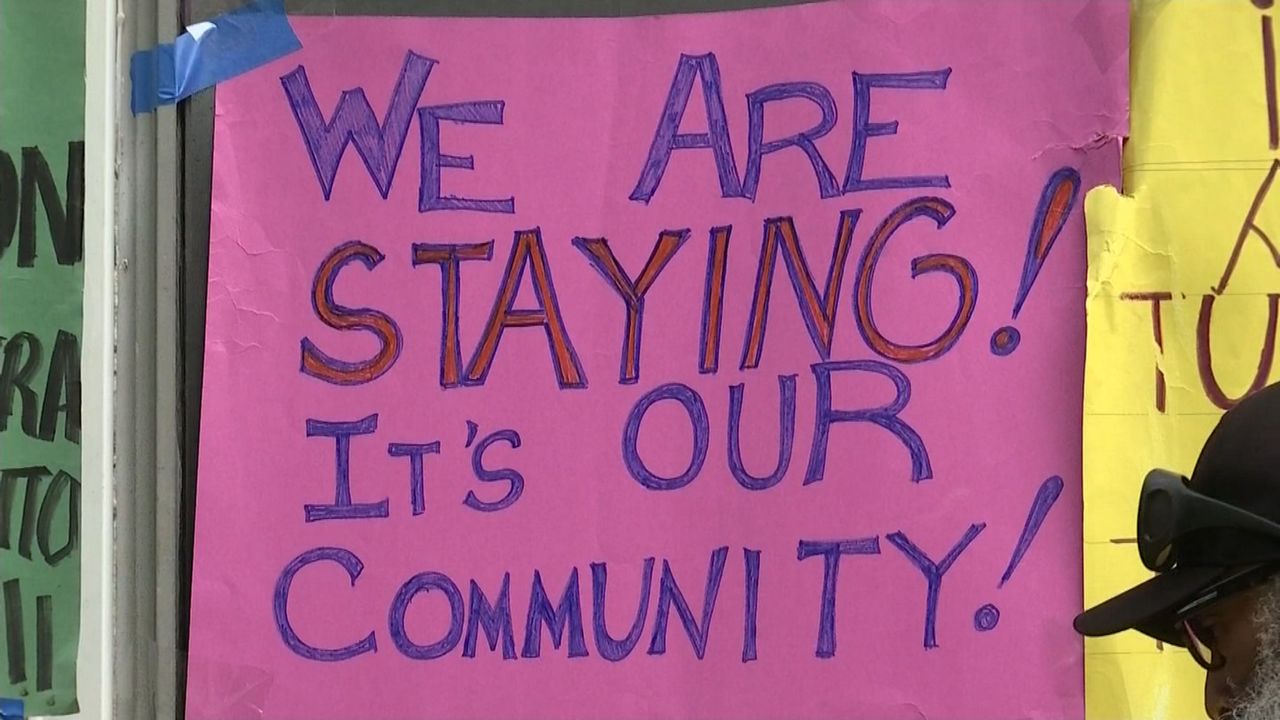 Denisse Miramon says it's her father, not the landlord, who has repaired leak-damaged walls, ceilings and floors at her family's $998 a month rent stabilized apartment, on Huron Street in Greenpoint.

It's an apartment she says that's been plagued with mold, rusty fixtures, and leaks from excessive humidity.

"The ceiling was Very moldy and it would always leak to the point where my dad had to. He fixed it multiple times my dad, but it came to the point where it was just falling in so much leaking that he put up on my dad put a plastic cover on it until the landlord came and fixed it,” said Miramon.

Miramon and the buildings other tenants, who are Latino families, said at a rally Tuesday afternoon that the Landlord's failure to make proper repairs is an effort to drive them out, so he can sell the building for millions of Dollars, in a neighborhood transformed by gentrification.

“Suddenly since it became a boom, my house has been neglected for far too long,” said Miramon.

Other tenants tell similar horror stories about their living conditions.

Maria Galicia said her bathroom ceiling collapsed while her husband brushed his teeth.

Listings for the 6-unit building show a $3.5 million-dollar asking price.

One of the selling points for that listing is, that the "building will be delivered vacant."

Now tenants are asking a housing judge on Wednesday to take building management out of the landlord's hands, and allow another company to handle the repairs.

"The landlord thought he would make a profit by putting us on Notice that this building would be sold vacant but I guess we're going to give him a notice today that it won't be sold vacant because these families will stay here," said Councilman Antonio Reynoso.

An attorney for building owner Rogelio Domenech, said that as far as he knew, the landlord "most certainly never agreed to sell the place vacant" and suggested contacting the broker. A seller’s representative on the listing did not respond to questions from NY1.

The attorney, Alex Rodriguez, said tenants in the past never complained. But a flood of complaints came in earlier this year when the building went on the market.

"The tenants themselves are responsible for things like destroying the property and overcrowding and the same tenants who are now bringing suit for this reason, I think it essentially it sounds like they were scared of being evicted and then, my understanding of the consulted attorneys who sort of drove this case to where it is now, it's sad and unnecessary," said Rodriguez.

The tenants, meanwhile, say that despite the attempt to sell, they plan to stay, refusing to be run out of their home and neighborhood.