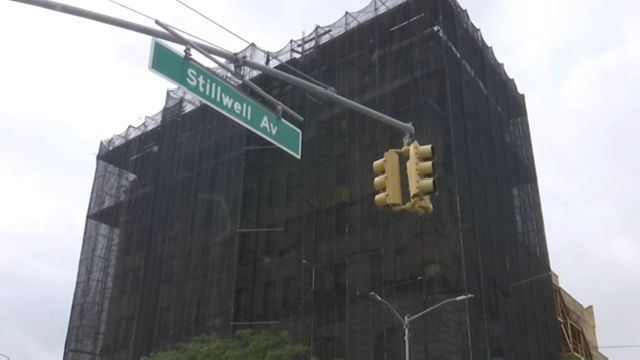 For decades, a faded city landmark at the corner of Surf and Stillwell avenues in Coney Island has attracted graffiti and the homeless.

"Some of the worst complaints we’ve seen in recent years are bricks falling down, pieces of glass falling down, people breaking in, staying inside," said City Councilman Mark Treyger.

But now there are bold, new plans for the long-neglected Shore Theater. Developer PYE Properties spoke to NY1 exclusively about turning the property into a boutique hotel.

"We figure approximately 50 rooms. Not large. Not small. We think it’s exactly what this part of Coney Island needs," said Eduard Yadgarov, Director of Operations at PYE Properties.

Under the scaffolding there are traces of the 1925 structure that once featured Vaudeville shows. It had different owners and uses throughout the years but has been vacant since 1978. It was declared a landmark in 2010 and so developers are working with the city to preserve its exterior.

"From our facade designers to conservateurs to preservation consultants, we’ve assembled a great team, companies that have been around helping us with the design," Yadgarov said.

While PYE Properties had no updated renderings to show, the developer did share some other amenities that will be incorporated into the hotel.

"Banquet space and a multicultural spa where families and children and adults can come by all year round," Yadgarov said.

There will also be a rooftop restaurant and lounge and ground floor cafe and retail shops.

Councilman Treyger says he’s anxious to get this site active again. It's a prime location - across the street from the Coney Island subway station and Nathan’s.

"This is a very important piece to Coney Island to us and we understand the significant importance," Yadgarov said.

Construction is expected to last two years. The new hotel's anticipated opening is set for 2021.