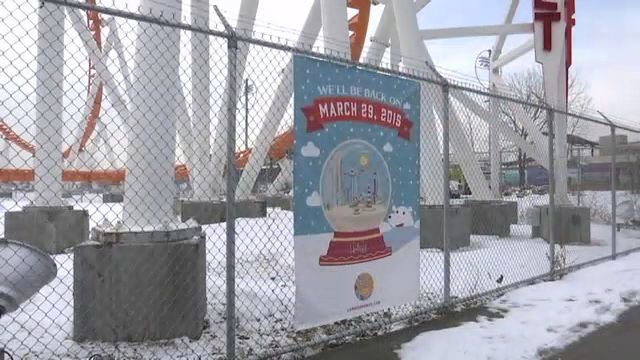 Snow is still on the sidewalks, but opening day for Coney Island is just eight weeks away. NY1's Jeanine Ramirez has the scoop on what's in store this season after a historic season last year.

Piles of snow are being removed from Surf Avenue, but thoughts of spring are on the minds of those in Coney Island. Opening day is less than two months away, and the hope is to build on the record-breaking attendance from last season.

"We estimate that over 1.5 million visitors came to the amusement park, which is a historic record in modern record-keeping," said Nate Bliss, senior vice president of the Economic Development Corporation.

While the weather had a lot to do last year's success, so did the addition of the Thunderbolt roller coaster, the first custom-designed coaster to be built in Coney Island in decades. It drew more than 182,000 riders.

"We actually saw people from all over the world coming to the Thunderbolt," Bliss said. "This was one of the top five most anticipated attractions among amusement enthusiasts."

"A lot of people coming out to Coney Island for the first time," said Johanna Zaki, executive director for the Alliance for Coney Island. "We're noticing a trend. Year after year, even more New Yorkers who haven't been to Coney Island in a really long time are getting on the train and coming on down."

So what are the new attractions this year? Eight new rides - three at Deno's Wonder Wheel Park, the rest at Luna Park. There are also new places to eat. Checkers is opening by the Stillwell Avenue train station, and a Wahlburgers is on the way. The celebrity brothers who founded the restaurant will even feature this new eatery on their show on A&E.

"That'll actually be part of their reality show. They're working it into the story of the show," Zaki said. "So we're very excited about that."

There's also excitement about Coney Island becoming a year-round destination. A new semi-pro football team debuted in the fall, and there was the first New Year's Eve celebration.

"This is extraordinary for an area that has been known for being a seasonal destination," Bliss said.

Still, how to attract crowds mid-winter remains a challenge.

Palm Sunday is the traditional opening day in Coney Island. It falls on March 29 this year.