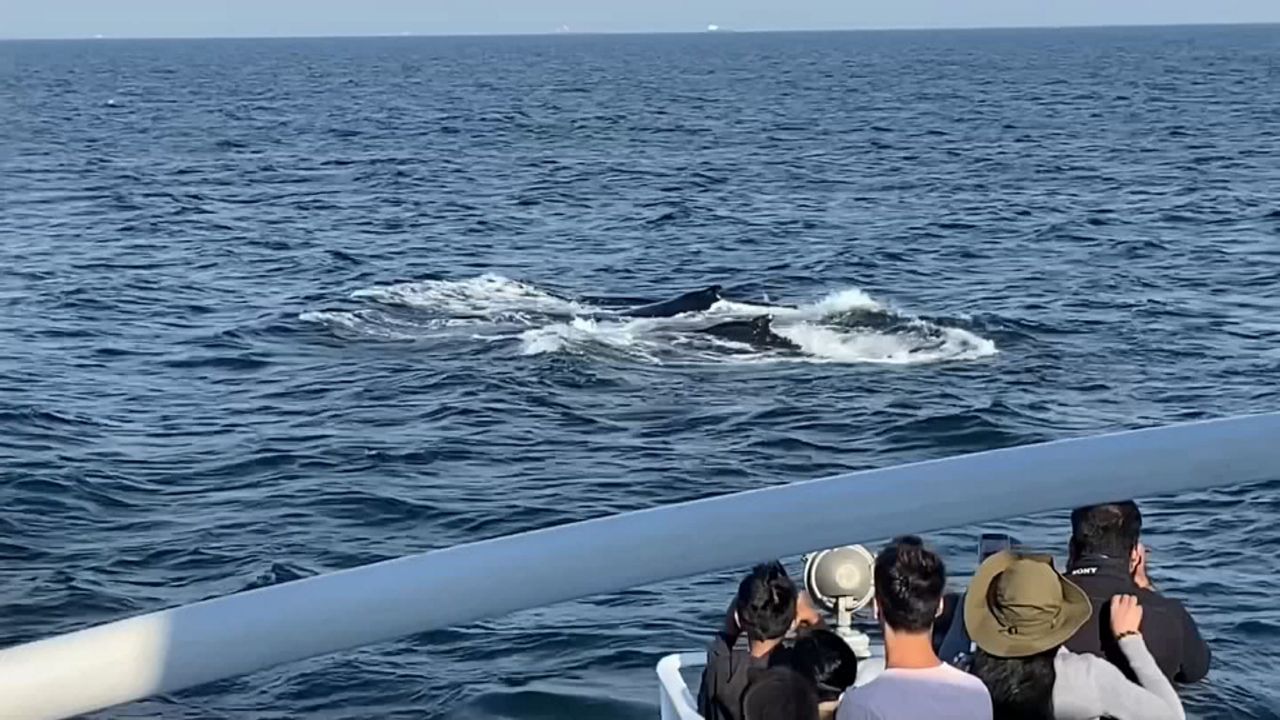 New York City may be called the concrete jungle, but it’s not known for having the most exciting wildlife.

Just off the coast of Brooklyn is a trip that is changing that perception.

“Straight ahead of us at 12 o’clock, about a mile or so, there was a large splash,” Mitchell Steinhardt, a naturalist with American Princess Cruises and Gotham Whale, said.

A boat full of a couple dozen people waited anxiously with their phones out, recording the water in the New York Bight.

It didn’t take long for a humpback whale to emerge.

Whale-watching is now a thing in the city.

Less than two miles off the shore of the Rockaways, whales are choosing a summer home.

“Rockaways is the new Cape Cod,” Frank DeSantis, the captain of the ship, said.

It’s not new seeing whales off the coast of Brooklyn. A whale visited the Statue of Liberty in 2020.

Steinhardt said he believes sightings are increasing because the Hudson River has been getting cleaner, which is attracting more fish enticing more whales.

“They’re chasing the bait. Where the bait is, that’s where we’ll find them pretty much,” he said.

According to Steinhardt, this migration has been developing over a decade.

“First year that we were out, we spotted five whales,” he said. “The entire season. Now we have whales 97% of the time on our trips.”

Steinhardt led the tour for the American Princess Cruises. However, he is also doing important work onboard.

He volunteers with Gotham Whale, a nonprofit that documents the whale population in the New York City area.

Gotham Whale partners with American Princess Cruises, allowing the volunteers to board their tours for free to do their research. Gotham Whale volunteers take pictures to track which whales are coming to the city’s waters, their location and what they do.

Celia Ackerman helps update a database that could be called the whale encyclopedia of the city.

Each new photograph taken on a whale-watching cruise is compared to the ones already in their system. It’s their way to see if it’s a whale they’ve seen before or if it’s a new one.

A team of three inspects photographs of a whale’s tail and dorsal fin, which are both unique to each mammal — similar to a fingerprint.

Ackerman said she sometimes spends hours comparing picture after picture to find exact matches over the years. The data also tells a story about each whale.

“Last year was the first time we had a female humpback whale bring her young calf here to our waters to teach it how to feed and that calf came back this year again just where it’s mom showed it to go and feed,” she said.

Gotham Whale researchers have used the data to publish a handful of reports.

The reports include a map of red pins marking the spots where humpback whales are feeding, which is called lunge-feeding.

The places where whales are feeding and where cargo ships are traveling match up. Gotham Whale researchers said they’re concerned about more ships striking whales in the New York Bight.

“The more accurate records we can maintain, the better it is for these whales,” said Ackerman. The International Whaling Commission said it’s hard to know how often boats collide with whales and it’s difficult for ship crews to see whales swimming near the surface. “A large cargo ship is like a train. It can take miles to stop,” said Steinhardt.

The American Princess Cruises will alert other boats about whale sightings. The federal government has a strict speed limit for ships longer than 65 feet around New York Harbor from Nov. 1 through April 30.

But Steinhardt said this research shows it may need to be year-round.

“We’re getting more and more of these magnificent creatures in our area and we don’t want to see them go away,” he said.