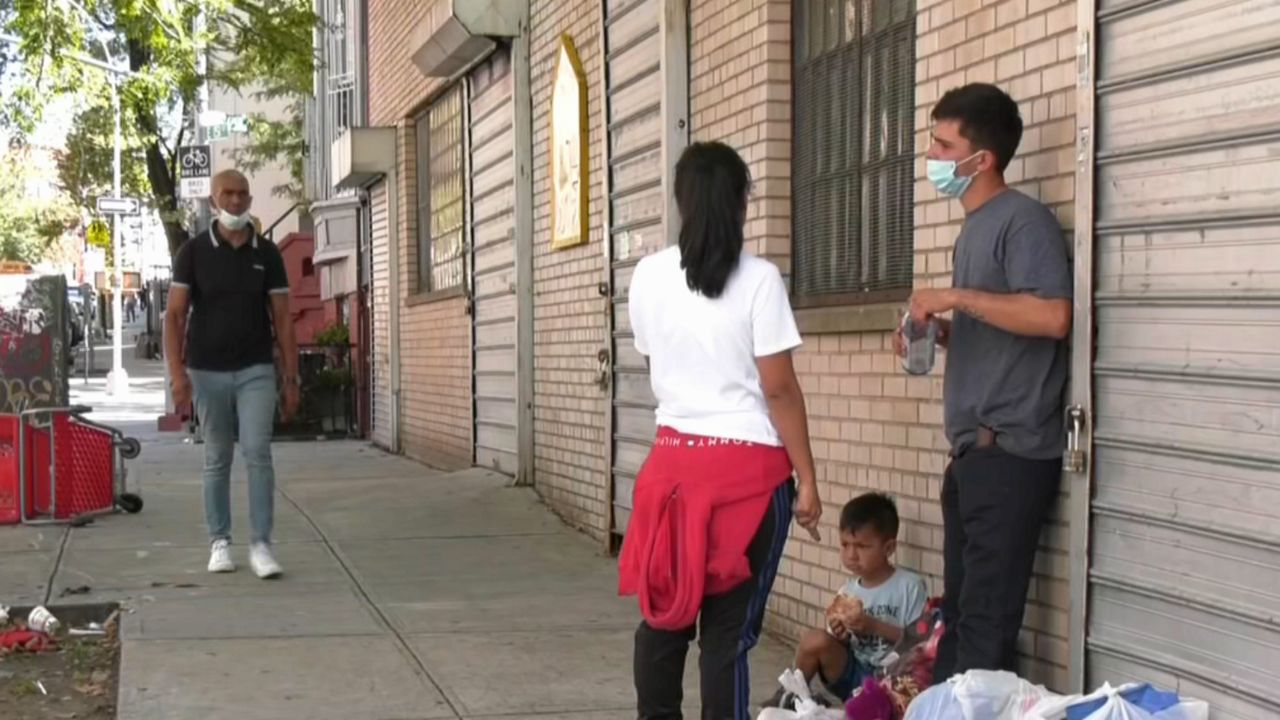 Some families recently crossed the southern border and within the last few days, they had made their way to New York. (NY1 Photo)

Migrants seeking asylum land at shelter in the Bronx

It was a sweltering day outside of the city’s intake center for homeless families in the Bronx.

Some of those families recently crossed the southern border. And within the last few days, they had made their way to New York.

“I came to New York to look for help for my wife, for my daughter, for myself because we don’t have anyone who can help us,” Julian Barrantes said, who came with his wife and daughter from Colombia, crossing the border in Arizona. “We came to New York because they said we can get help."

He said a “foundation” paid for his trip to the Bronx.

Andres Rodriguez, who did not want his face on camera, came from Venezuela.

“I left Venezuela only with $300,” Rodriguez said.

He traveled through all of Central America by foot to get to New York, trudging through the desert without sufficient water. And now they are, in some cases, inexplicably being thrust into the city’s shelter system.

Rodriguez first went to the family shelter in the Bronx—an address he said was given to him by a friend. He was sent to the men’s shelter in Manhattan. He’s decided to stay on the streets instead.

This week, the city had to open 11 emergency shelters to address the growing need. Officials say they have received at least 4,000 asylum seekers looking for shelter in the past three months. About 100 are coming to this intake center every day. The mayor has called the influx a crisis.

“We believe based on our preliminary review, people are being interviewed at the border and say, ‘What state would you like to go to? Who will not say New York?’ That’s a set up question,” he said on Thursday.

The Department of Homeless Services says buses and smaller vans are coming here to drop people off. The city cannot say, definitively, who paid for them or how they got here.

The families and advocates NY1 spoke to say nonprofits or organizations near the border have organized some.

“The number of different places providing families to get here is varied and runs the gamut from more established organizations like Catholic Charities. There is even an organization in Florida that paid for one family’s I met tickets,” Kathryn Kliff of the Legal Aid Society said.

It has created a national controversy with GOP governors from Texas and Arizona busing people to the Washington D.C. to try to highlight the migrant crisis. Texas Gov. Greg Abbott invited Adams to the border to see it himself. Adams declined the invitation on Thursday.

“What the Texas governor should do is invite those who are trying to find housing in his state, to give them housing instead of sending them here,” Adams said.

As for Rodriguez, he took a bus from Texas to Washington. He’s here now, hoping to find help and a better life.

“I came looking for a better dream, a better job. I know this is temporary,” he said.