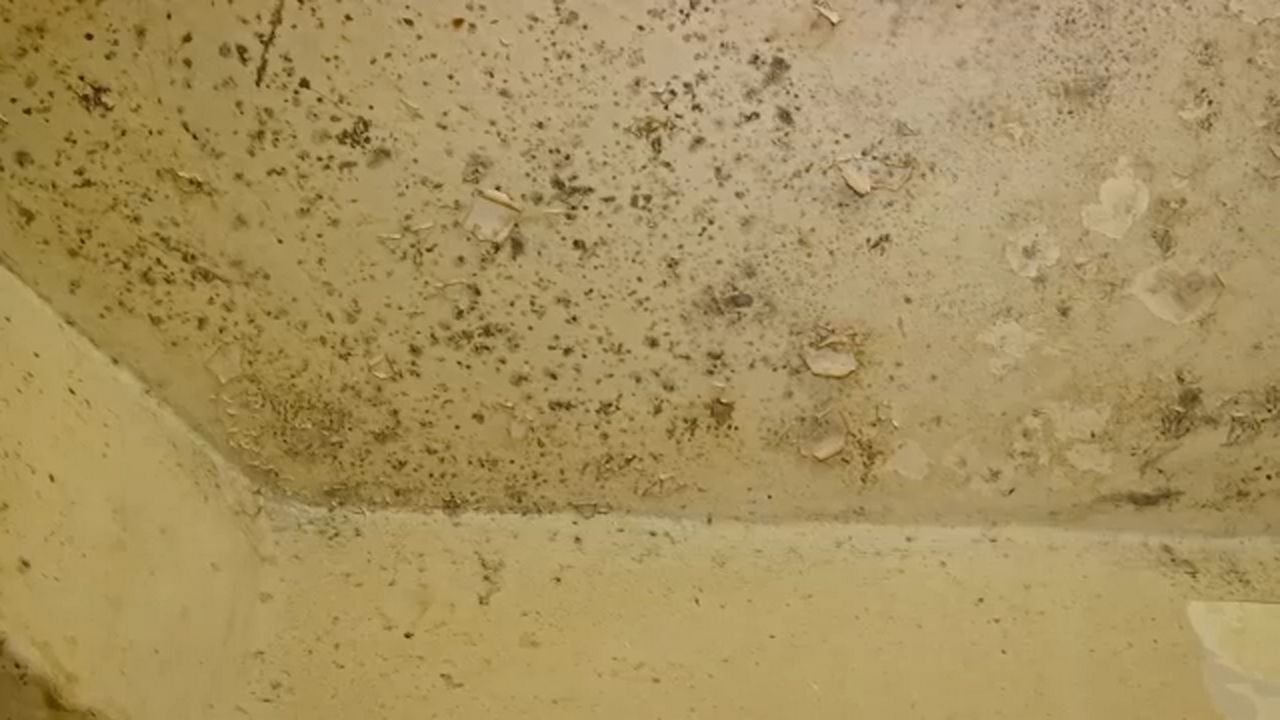 The other scandal at NYCHA: How it handles mold in apartments

The lead paint scandal at the city's public housing authority has already cost several high-level officials their job. But it turns out those same officials were involved with fighting another crisis at the agency: Mold. Critics now say those officials did not go far enough to make sure public housing residents were in clean and safe apartments. NY1 Political Reporter Courtney Gross has this special report.

When NY1 first met Raquel Cortes, her bathroom had been torn apart: the walls were gone, and her sink was lying in the hallway next to a massive hole.

"The people that came to fix this almost two years ago knew there was mold. But nothing was done," Cortes said.

About four months later, they tore apart her bathroom.

Before that, mold covered her ceiling, the paint chipped away from moisture, and black spots blanketed the walls.

"They scraped the top off, and I didn't have a toilet. They just put that one there," Cortes said, looking at her bathroom.

Cortes has lived in the Baruch Houses on the Lower East Side for 32 years. She is one of thousands of public housing residents who are left to live alongside mold.

She has a lung condition that requires oxygen. Mold is known to have hazardous health effects.

"I have asthma and I have COPD," she said.

Her family's story is taking on new relevance.

A little more than three weeks ago, top-level officials at the city's housing authority were demoted and forced out.

The punishment followed an investigation into lead paint at the city's public housing authority. Officials there had failed to conduct lead paint inspections for years and filed false paperwork with the federal government.

Top officials Luis Ponce and Brian Clarke took the fall. Those same officials were also in charge of the authority's operations as the mold problems escalated — the same problems pestering Cortes and the same problems that landed the housing authority in federal court years earlier.

"The people who live in NYCHA housing are entitled to the same standards that the people that Fifth Avenue and Park Avenue get in terms of things like mold," Steve Edwards says.

Edwards has been fighting for tenants in court.

Four years ago, NYCHA residents and community groups, including an organization known as Manhattan Together, brought a class-action lawsuit against the housing authority, claiming mold was a chronic condition in the city's public housing system, particularly harmful to those tenants with asthma.

In 2014, the city settled the case, promising to take care of the mold issues.

That promise, Edwards says, did not hold up.

He says NYCHA was trying to get around the settlement's requirements.

Who was making the case for NYCHA? Ponce and Clarke, the same two people who took the fall for the lead scandal.

They each filed declarations with the court, arguing the city was in compliance with the mold settlement.

He wrote, "NYCHA has been out of compliance with the Consent Decree from the day is was entered by this Court. NYCHA's justifications for its failure to comply are inadequate, and the attitude of NYCHA officials appears to be one of indifference."

The judge appointed what's known as a special master to oversee the program.

The authority filed quarterly reports with the court, updating them on how quickly they were addressing the issue.

For simple mold complaints, NYCHA would have to fix it in seven days on average. For more complex problems, it was 15 days.

Years after the settlement, we know Cortes waited for months to get her issues resolved.

"As you can see the sink is right behind you, it's just sitting there," Cortes told me on June 15.

"And you're not going to get one until mid-July?" I asked her.

"Nothing until mid-July," she responded.

That was an understatement. Her bathroom was not put back together until early-September; we saw the work start in May.

All along, the court has also been monitoring how often the mold comes back. According to the latest quarterly report covering August through October, in 46 percent of cases surveyed the mold returned.

That was what Vermelle Pleasant told NY1 when we visited her apartment in the Baruch Houses last week.

Mold reappears over and over again in her bathroom.

"It keeps coming back," she said. "They come, they clean it, and then it's clean for a while and gradually it just starts coming back."

NY1 sat down with a top official at the housing authority, Deborah Goddard, Friday to discuss all of these issues.

Gross: The day-to-day operations — Ponce and Clarke were in charge of that?

Goddard: To the best of my knowledge.

Gross: Do you think they did a good enough job to address the mold situation?

Goddard: That hasn't been the focus of how I do my job, and quite frankly I would never be the right person to say that they didn't do their job correctly.

The official NY1 spoke to heads up major projects. She touted a new pilot program that the housing authority started last year to tackle mold, and she discussed the construction of new roofs for some buildings.

She claimed NYCHA is on the right track. "A lot of work gone into what the best way is to do this, a lot of work with the special master," the official said. "And like I said, I think we are moving forward in the right vein."

Still, the city housing authority has billions of dollars in unmet capital needs — that covers bricks, pipes, or roofs it doesn't have the money to fix. All of that is needed to fix its mold problems.