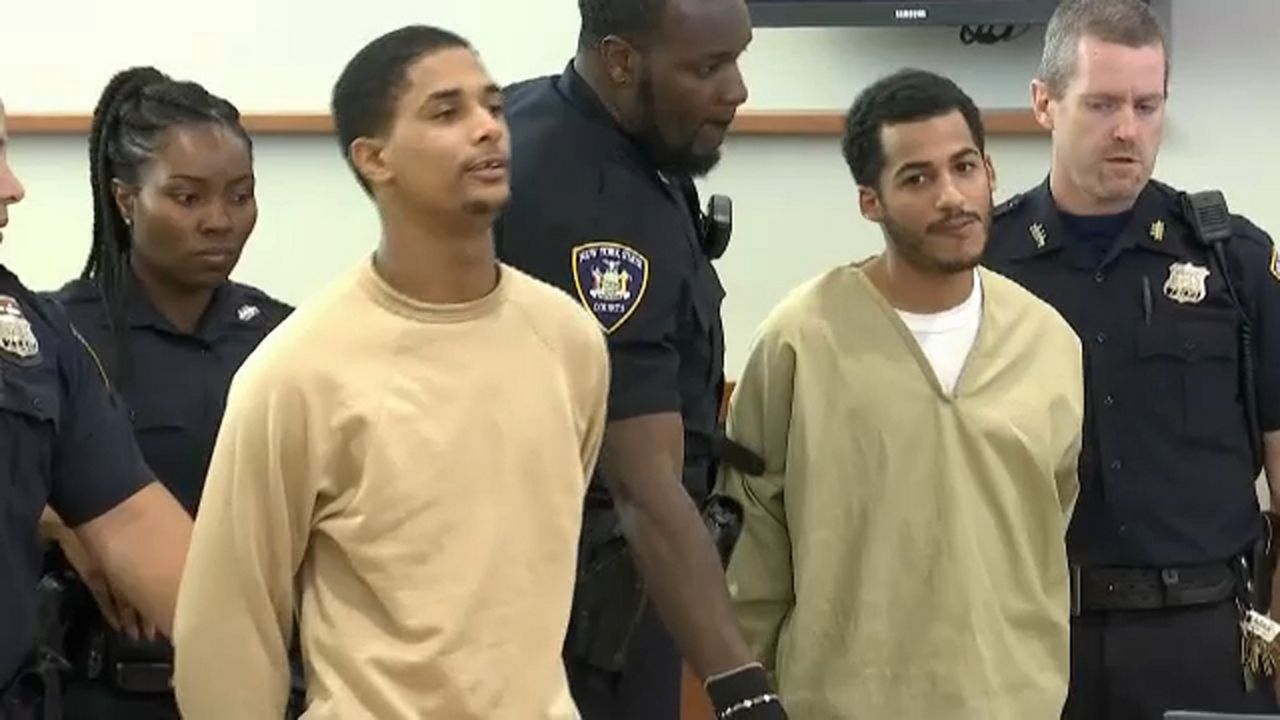 Leandra Guzman walked into a Bronx courtroom Wednesday, determined to face the 12 alleged street gang members charged in the fatal stabbing and slashing of her son.

But when the first two smirked while pleading not guilty to killing Lesandro Guzman-Feliz, the grieving mom could not contain herself:

"Asesinos!" she yelled as the two were walked out of the courtroom. Killers, she called them.

"They did not kill a man or a gang member or nothing; they killed a good boy. Only 15 years old. He was a baby, he was a kid," Guzman said.

The defendants, who allegedly belong to the Trinitarios gang, were escorted into the courtroom two at a time. Each pleaded not guilty to murder.

The killing was caught on camera. Surveillance video shows the suspects dragging the teenager out of a bodega at east 183rd St. and Bathgate Ave. in Belmont before he was stabbed with knives and a machete.

"I've got to tell you, I've been a cop for almost 36 years now, and it was one of the worst things I've ever seen — and I've seen a lot of disturbing things," Police Commissioner James O'Neill said.

"I gotta tell you, I've been a cop for 36 years now and it was one of the worst things I've ever seen." ⁦@NYPDnews⁩ Cmsr. O'Neill on the murder of 15-y/o Lesandro "Junior" Guzman-Feliz. #justice4junior pic.twitter.com/ByhlPnNsjc

Authorities say the teen, known as "Junior," was an innocent boy who was caught in a conflict between "Los Sures" and "Sunset," rival factions of the same violent gang.

"The defendants allegedly plotted to attack an upstart set of the Trinitarios, and allegedly committed a crime that has shocked people everywhere for its brutality," Bronx District Attorney Darcel Clark said.

The brazen killing, the innocence of the victim, and the broadcast of the surveillance video led to a flood of anonymous tips that helped investigators quickly track down the suspects.

"As a police department and as a city, we need to harness the power of all New Yorkers," O'Neill said. "It's critical that everyone understands that for our city to achieve true public safety, it's a shared responsibility. And that's what we saw here."

The killing of Guzman-Feliz sparked outrage on social media, with the hashtag #JusticeForJunior being picked up around the country. Some athletes and celebrities, including Yankees pitcher CC Sabathia, rapper Cardi B, and singer Rihanna, have also called for justice and have expressed their condolences.

If convicted, the defendants face the possibility of life in prison without parole.

Authorities said that in the last month, they have made 79 felony arrests linked to the Trinitarios gang, and hinted they may not be done rounding up suspects in the case of the slain teenage boy.