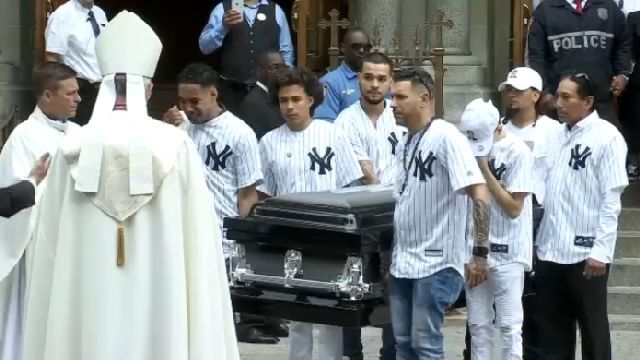 Teenager, fatally stabbed in the Bronx, laid to rest

Hundreds of people attended an emotional funeral Wednesday morning for a Bronx teenager who was fatally stabbed last week. It was just hours before some of his accused killers appeared in court.

"There have been so many tragedies in this country and in the Bronx," a priest told those gathered inside the church. "Today, in the name of Jesus, I want you to renew commitment — it's a commitment — as human beings and as Christians to protect the lives of our people."

Mourners gathered at Our Lady of Mount Carmel Church in Belmont to pay their final respects to 15-year-old Lesandro "Junior" Guzman-Feliz. A number of them wore New York Yankees jerseys to remember the 15-year-old and his love of the team.

Church leaders used a police slogan, "If you see something, say something," when asking community members to come together to stop the violence after Guzman-Feliz's death.

Police said he was dragged out of a bodega by suspected gang members and slashed in the neck with a machete last Wednesday in Belmont. It is believed to be a case of mistaken identity.

The killing of Guzman-Feliz has sparked outrage nationwide on social media, with the hashtag #JusticeForJunior being picked up around the country.

Some athletes and celebrities, including Yankees pitcher CC Sabathia, rapper Cardi B, and singer Rihanna, have also called for justice and have expressed their condolences.

Hundreds came out Tuesday night for a second viewing while community leaders and residents held a vigil retracing the final steps the teen took before his death.

Some of the suspects were arraigned in Bronx Criminal Court on Wednesday.

The other two suspects, 19-year-old Kevin Alvarez and 23-year-old Elvin Garcia, have both pleaded not guilty on murder and manslaughter charges.

The bodega where Guzman-Feliz was dragged from and returned to for help has been closed since his death.

City Councilman Ritchie Torres sent a letter to the city's Department of Consumer Affairs, asking it to revoke the business license of the bodega for not aiding the teen.