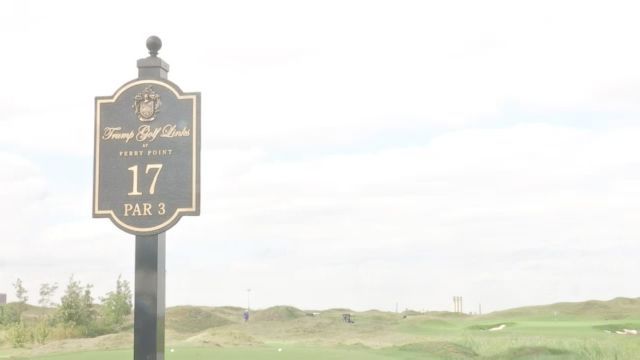 One Year Later, Is Trump's Bronx Golf Course Up to Community's Par?

It's been a year and a half since Donald Trump - the controversial Republican nominee for President - opened a golf course bearing his name in the Bronx, the most heavily Democratic county in the country. Borough reporter Erin Clark examines the course's impact on the Bronx and whether Trump's promises to the community have been kept.

Where there was once a landfill golfers now enjoy views of Long Island Sound at the Trump Golf Links at Ferry Point in Throggs Neck.

"People used to see flames flying out. Really it was a horrible situation," said Community Board 10 Parks and Recreation Committee Member Bob Bieder.

The city spent $127 million building the course. And the Bloomberg administration contracted with the Trump organization to operate and maintain it.

Some residents say the course is an improvement over what had been there before.

"Revived an area that was not useable," said Community Board Chair Martin Prince.

A real estate consultant says property values for nearby homes have increased nine percent since 2014.

There isn't much support for Donald Trump's presidential campaign in the Bronx, but some say the Trump Organization has been a good neighbor.

"They've been supportive of the community. I know they've been making donations to the local merchants association," Bieder said.

"Seventy percent of the jobs from this property are from within the five boroughs and of that, maybe 90 percent are right here locally," Lieberman said.

At a nearby NYCHA complex, some residents disagree.

"They have done none of the above," one resident claimed.

Community activist Monique Johnson says no instructors showed up for a free kids golf program on Columbus Day. And that jobs promised to NYCHA residents, including those who completed a caddy program, never came through.

"They let everyone of them go after the training stating that they did not qualify," Johnson said.

Lieberman said there was no promise to hire NYCHA tenants but that some residents were offered caddy jobs and did not accept them.

He says the youth golf program was canceled because no one formally RSVPed.

"It wasn't for lack of effort," Lieberman noted.

He adds that the Trump Organization hopes to do more work in the community. It has proposed renovating a small public park near the golf course.