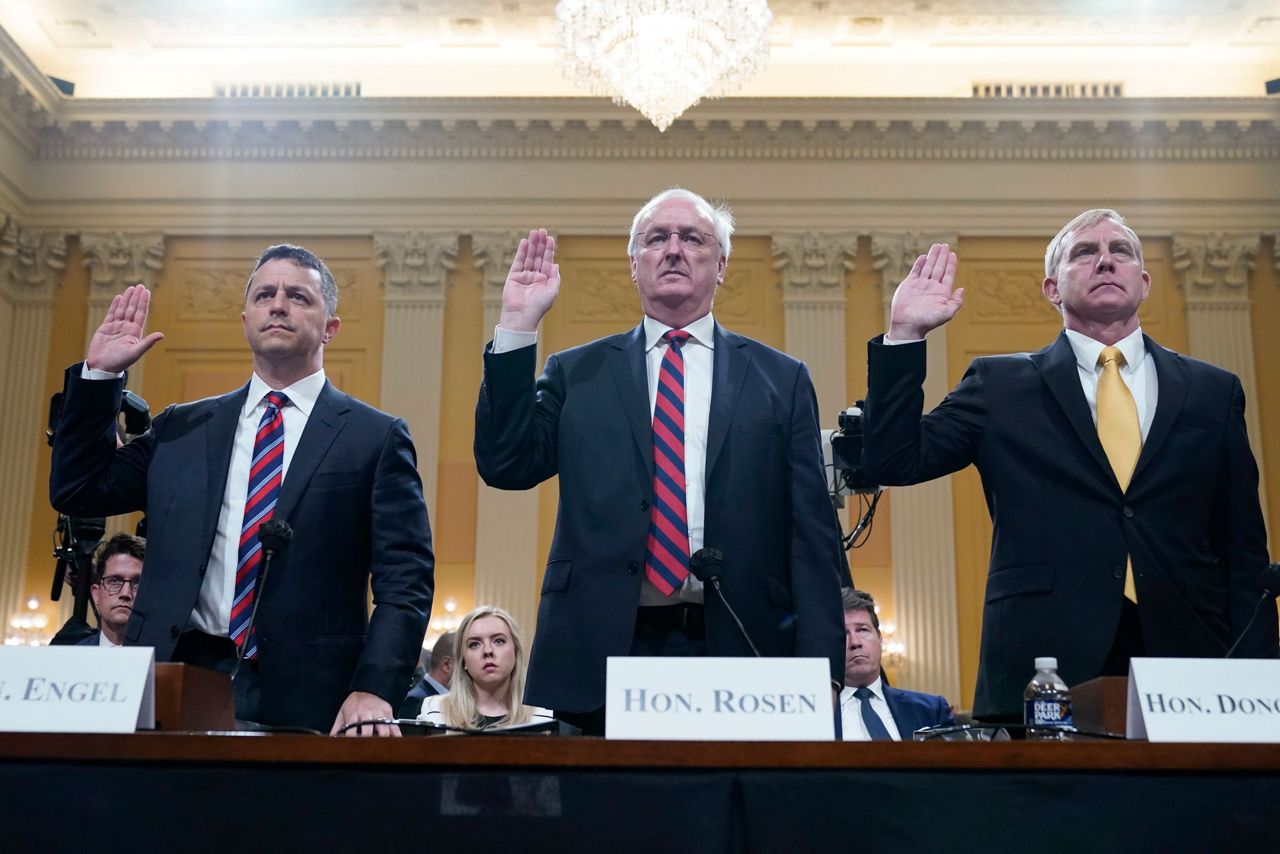 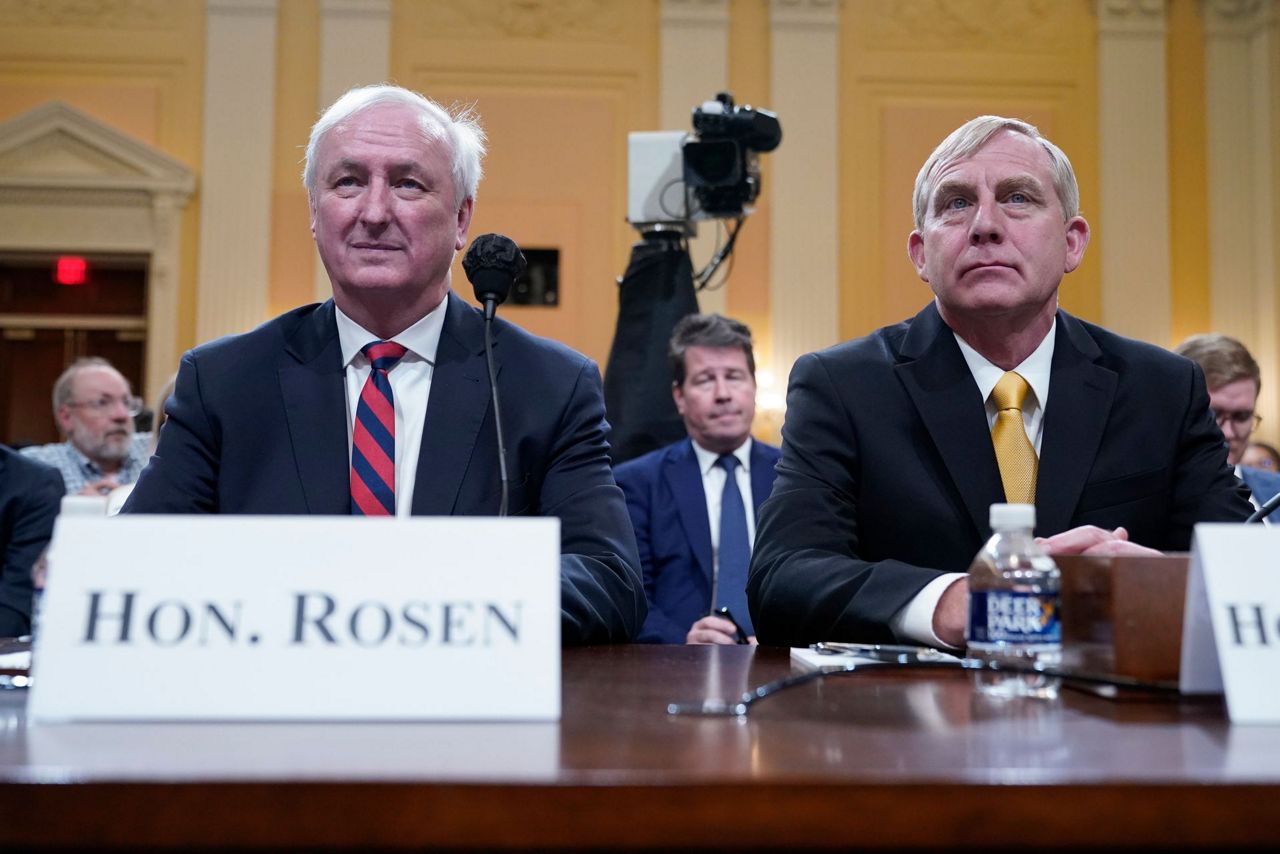 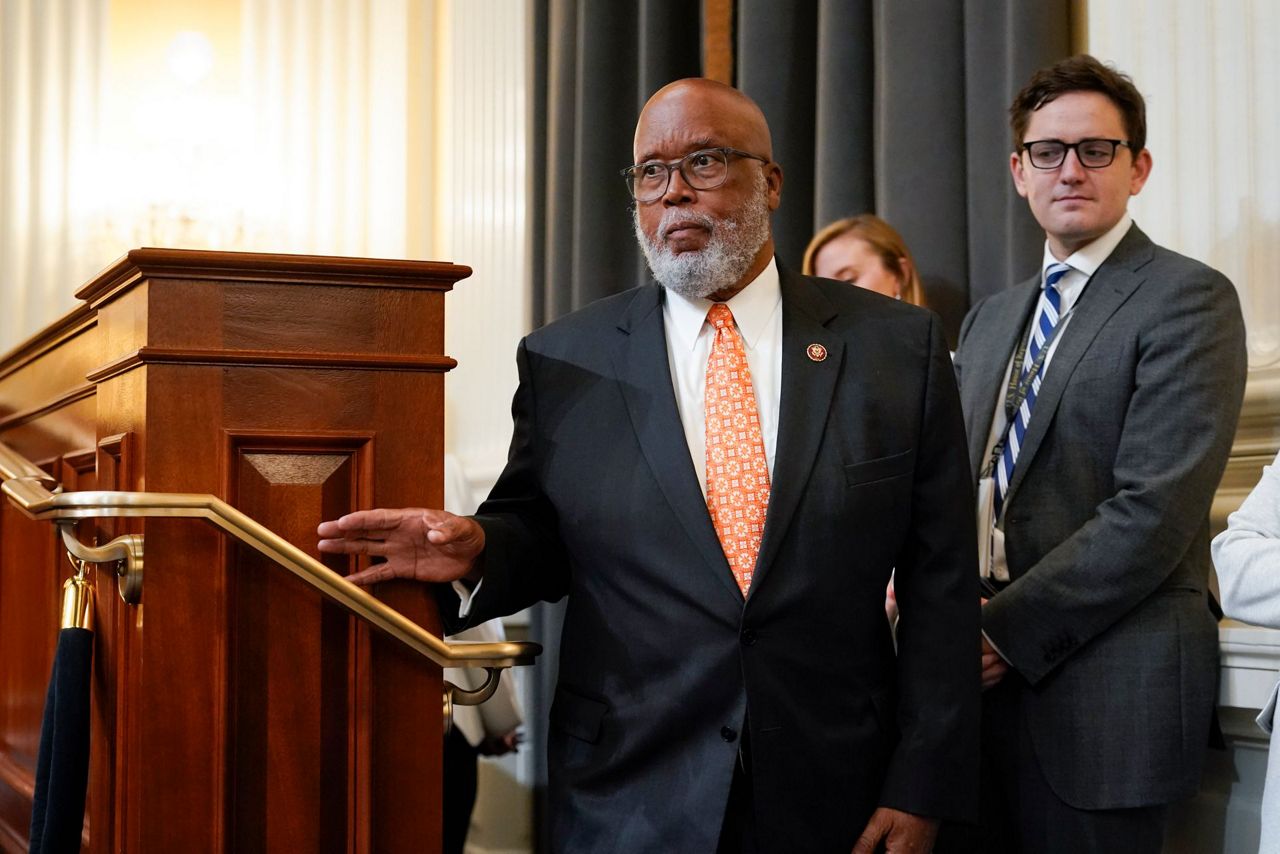 3 of 6
Chairman Bennie Thompson, D-Miss., arrives as the House select committee investigating the Jan. 6 attack on the U.S. Capitol continues to reveal its findings of a year-long investigation, at the Capitol in Washington, Thursday, June 23, 2022. (AP Photo/J. Scott Applewhite) 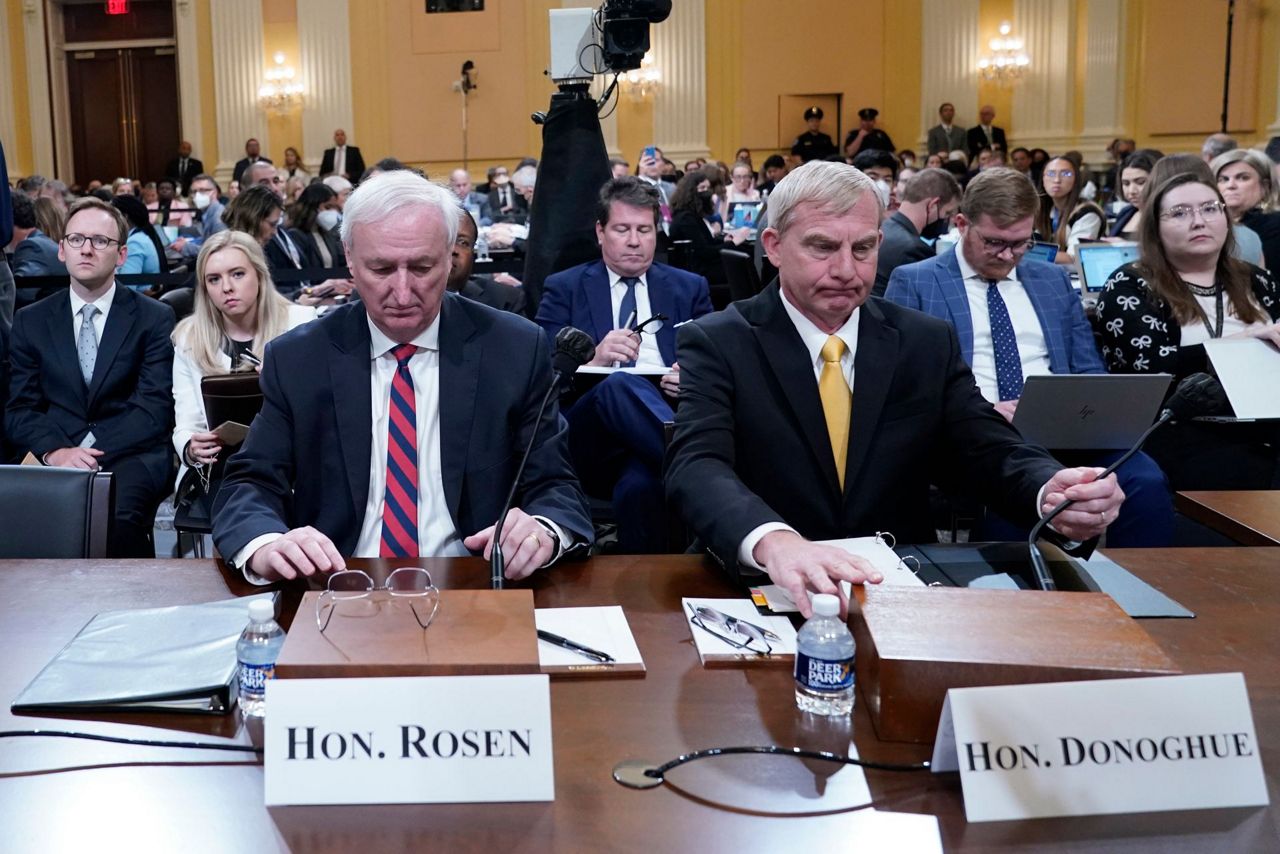 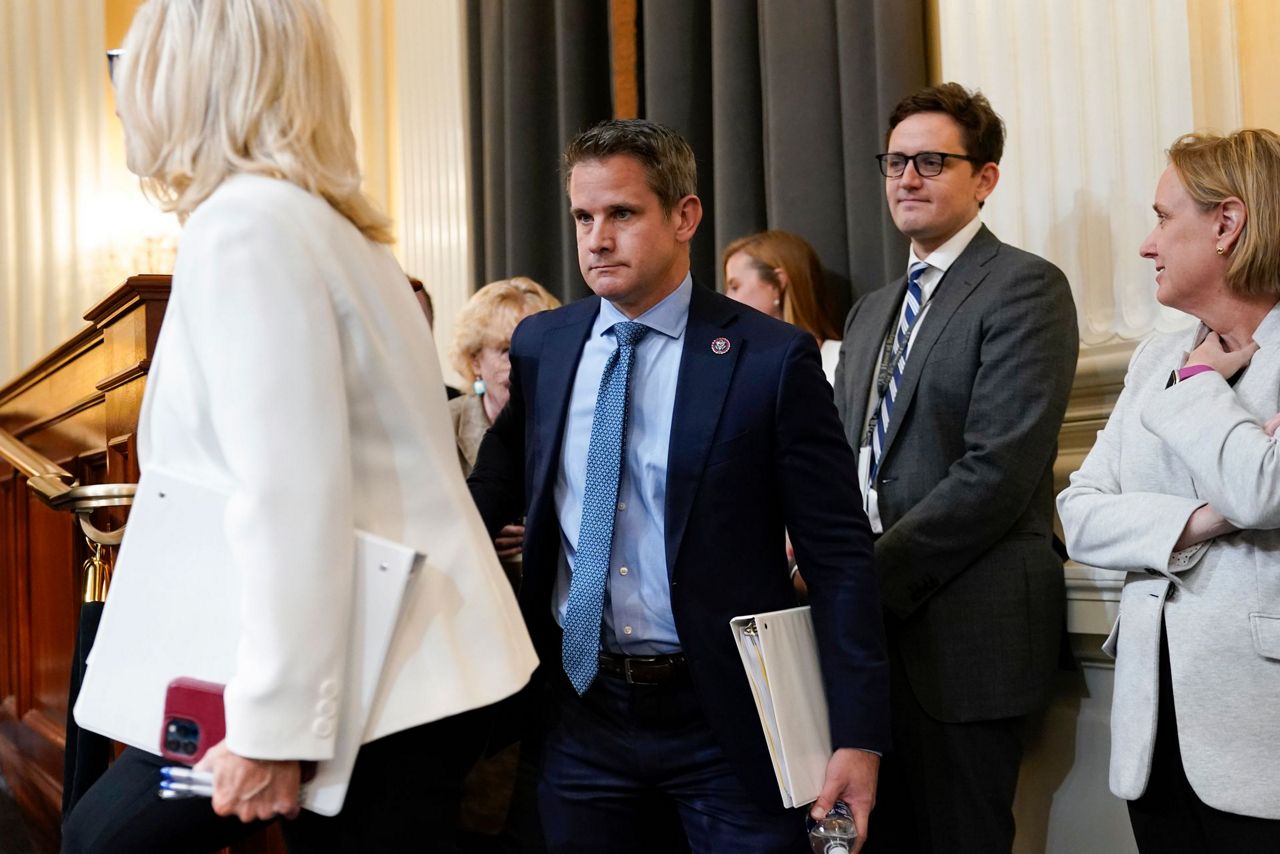 5 of 6
Vice Chair Liz Cheney, R-Wyo., left, and Rep. Adam Kinzinger, R-Ill., arrive as the House select committee investigating the Jan. 6 attack on the U.S. Capitol continues to reveal its findings of a year-long investigation, at the Capitol in Washington, Thursday, June 23, 2022. (AP Photo/J. Scott Applewhite) 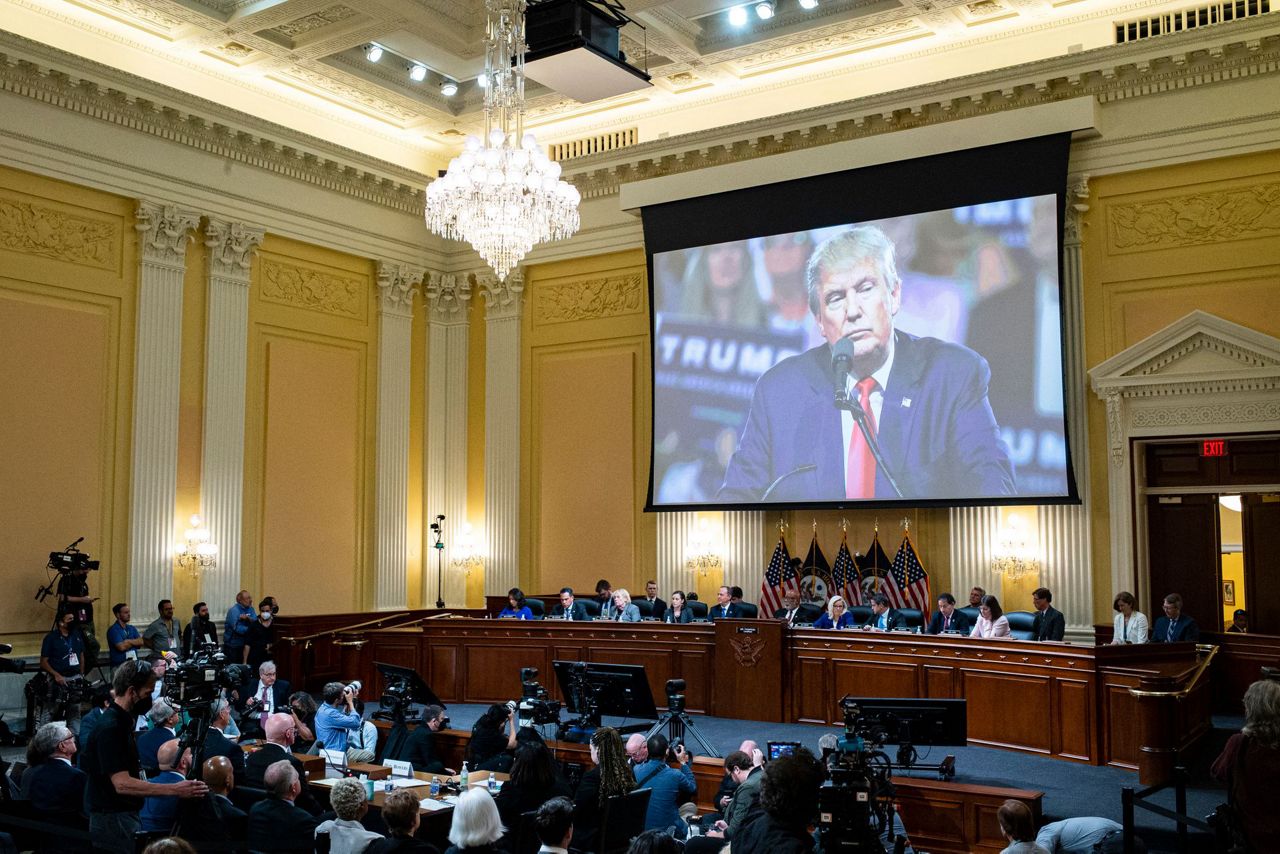 6 of 6
An image of former President Donald Trump is displayed as the House select committee investigating the Jan. 6 attack on the U.S. Capitol continues to reveal its findings of a year-long investigation, at the Capitol in Washington, Tuesday, June 21, 2022. On June 23, the Jan. 6 committee will hear from former Justice Department officials who faced down a relentless pressure campaign from Donald Trump over the presidential election results. (Al Drago/Pool Photo via AP)

WASHINGTON (AP) — Donald Trump hounded the Justice Department to pursue his false election fraud claims, contacting the agency's leader “virtually every day” and striving in vain to enlist top law enforcement officials in a desperate bid to stay in power, according to testimony Thursday to the House panel investigating the Jan. 6, 2021, Capitol riot.

Three Trump-era Justice Department officials testified that Trump was fixated on voter fraud claims and insisted they pursue them despite being repeatedly told that none of the allegations had any merit.

“He had this arsenal of allegations,” said Richard Donoghue, one top Justice official. "I went through them piece by piece to say, no, they were not true.”

Another witness, Jeffrey Rosen, the acting attorney general in the final days of the Trump administration, said he was called by Trump or met with him virtually every day from the time he ascended to the post in late December 2020. The common theme he said, was “dissatisfaction about what the Justice Department had done to investigate election fraud.”

The hearing brought attention to a memorably turbulent stretch at the department as Trump in his final days in office sought to bend to his will a law enforcement agency that has long cherished its independence from the White House. The testimony was aimed at showing that Trump not only relied on outside advisers to press his false claims of election fraud but also tried to leverage the powers of federal executive branch agencies.

The scheme by Trump was a “brazen attempt” to use the Justice Department for his own political gain, said Rep. Bennie Thompson, a Mississippi Democrat and chairman of the Jan. 6 committee.

Testimony also centered on a tense Oval Office showdown on Jan. 3, 2021 in which Trump contemplated replacing him with a lower-level official, Jeffrey Clark, who wanted to champion Trump's bogus election fraud claims. Donoghue and another senior Justice Department official, Steven Engel, warned Trump that there would be mass resignations at the department if Trump followed through with his plan. Only then did Trump relent.

Clark's name was referenced early in the hearing, with Rep. Adam Kinzinger, an Illinois Republican, deriding him as a lawyer whose sole qualification was his fealty to Trump. A lawyer for Clark did not return an email ahead of the hearing.

“Who is Jeff Clark?” Kinzinger asked rhetorically. "He would do whatever the president wanted him to do, including overthrowing a free and fair democratic election.”

Barely an hour before the hearing began, it was revealed that federal agents this week searched Clark’s Virginia home, according to a person familiar with the matter who was not authorized to discuss it by name and spoke on condition of anonymity. A spokesman for the U.S. attorney confirmed the existence of law enforcement activity in Virginia, where Clark lives, but would not say what it was connected to.

The panel's hearing was the fifth this month by the House committee investigating the run-up to the insurrection at the Capitol, when Trump loyalists stormed the building as lawmakers were certifying the results of the election won by Democrat Joe Biden. Witnesses have included police officers attacked at the Capitol as well as lawyers, a television executive and local election officials who all resisted demands to alter results in Trump's favor.

Thursday's hearing focused on what happened next as Rosen, Barr's top deputy, took over the department and found himself immediately besieged by Trump's demands for action.

In one phone conversation, according to handwritten notes taken by Donoghue and made public by lawmakers last year, Trump directed to Rosen to “Just say the election was corrupt and leave the rest to me and the R. Congressmen."

Around that time, Trump was introduced by a Republican congressman, Rep. Scott Perry of Pennsylvania, to Clark, who'd joined the department in 2018 as its chief environmental lawyer and was later appointed to run its civil division. Clark has been subpoenaed by the committee to give a deposition but was not be among the witnesses Thursday.

Clark, according to statements from other Justice Department officials, met with Trump despite being ordered not to by bosses at the department and presented himself as eager to aid the president's efforts to challenge the election results. A report released last year by the Senate Judiciary Committee that painted Clark as a relentless advocate for Trump included a draft letter pushing Georgia officials to convene a special legislative session to reconsider the election results.

Clark wanted the letter sent, but superiors at the Justice Department refused.

The situation came to a head on Jan. 3, 2021, a Sunday, when Clark informed Rosen in a private meeting at the Justice Department that Trump wanted to replace him with Clark as acting attorney general. Rosen, according to the Senate report, responded that “there was no universe I could imagine in which that would ever happen" and that he would not accept being fired by a subordinate.

Rosen then contacted the White House to request a meeting. That night, Rosen, Donoghue and Engel, along with Clark, gathered with Trump and top White House lawyers for a contentious, hours-long Oval Office meeting about whether the president should follow through with his plans for a radical leadership change at the department.

According to testimony given by Rosen, Trump opened the meeting by saying, “One thing we know is you, Rosen, aren’t going to do anything to overturn the election.”

Donoghue and Engel made clear to Trump that they and large numbers of other Justice Department officials would resign if Trump fired Rosen. White House lawyers said the same. Pat Cipollone, then the White House counsel, said the letter that Clark wanted to send was a “murder-suicide pact.”

“Steve Engel at one point said, ‘Jeff Clark will be leading a graveyard. And what are you going to get done with a graveyard,’ that there would be such an exodus of the leadership,” Donoghue told the Senate Judiciary Committee. “So it was very strongly worded to the president that that would happen.”

Donoghue also sought to dissuade Trump from believing that Clark had the legal background to do as the president wished since he was not a criminal prosecutor at the department.

“And he kind of retorted by saying, ‘Well, I’ve done a lot of very complicated appeals and civil litigation, environmental litigation, and things like that,’” Donoghue said. “And I said, ‘That’s right. You’re an environmental lawyer. How about you go back to your office, and we’ll call you when there’s an oil spill.’”

For full coverage of the Jan. 6 hearings, go to https://www.apnews.com/capitol-siege.