NYC now has a longer allergy season, but not for everyone

It may be no surprise to hear that the allergy season is beginning earlier in the spring and lasting longer into the fall. But not all allergies are created equal and new pollens are potentially being introduced around the city.

In the summer of 2020, the city's climate classification was changed from "continental subtropical" to "humid subtropical" as noted in the National Climate Assessment. The change was made because of warmer average temperatures throughout the year, both during the day and at night.

With this new classification, it's assumed that new species of plants can now grow in the city. It also means that plants are actively growing for a longer portion of the year.

This past March, we had several days with temperatures warmer than 50 degrees and even one 70-degree day. A warmup like this kicks off the growing season and therefore the sneezing season (allergy season, for those who missed the dad joke). 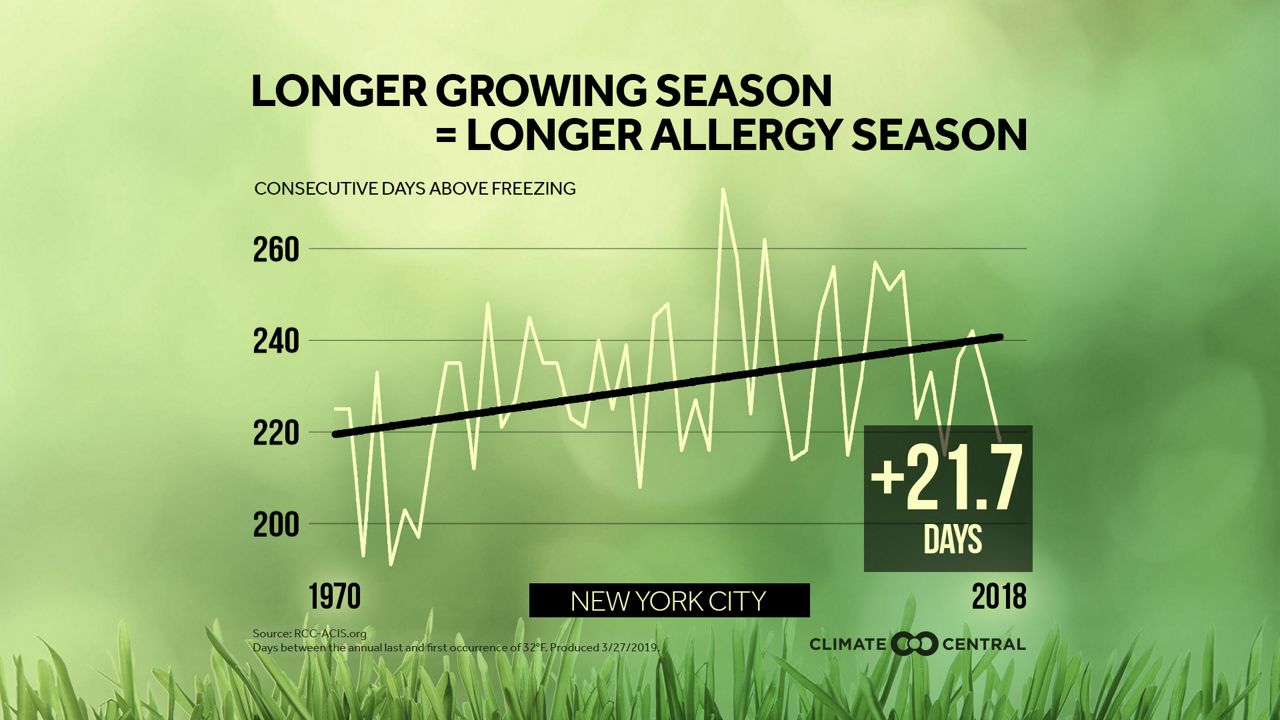 Pollen counts were already medium to high in mid-March. The earlier growing season and a long period of dry weather (nothing to rinse the air) contributed to the higher-than-normal pollen counts for so early in the season.

Your allergies are not my allergies

But according to the American College of Allergy, Asthma and Immunology, simply looking at those pollen counts doesn't tell the entire story for individuals.

Most of us with allergies struggle with grass pollen, which isn't usually an issue until later in the season. In the spring months, those high pollen counts are driven by tree pollen. When looking at pollen counts, it is important to note the type of pollen. Although the allergy season may begin earlier and end later in the season, it doesn't mean that all of us will experience allergy symptoms for longer.

Those with allergies to tree pollen are the ones dealing with an earlier start to the season of sniffling and sneezing.

On the flip side, grass pollens may last longer into fall, so if grass pollen is your nemesis, you'll feel that more on the tail end of the allergy season.

Here's the wild card in all of this: with a changing climate, new plant species that didn't exist here 20 or 30 years ago can move in and thrive. This means new kinds of pollens and potentially new allergies for some. There's always something to keep you on your toes!